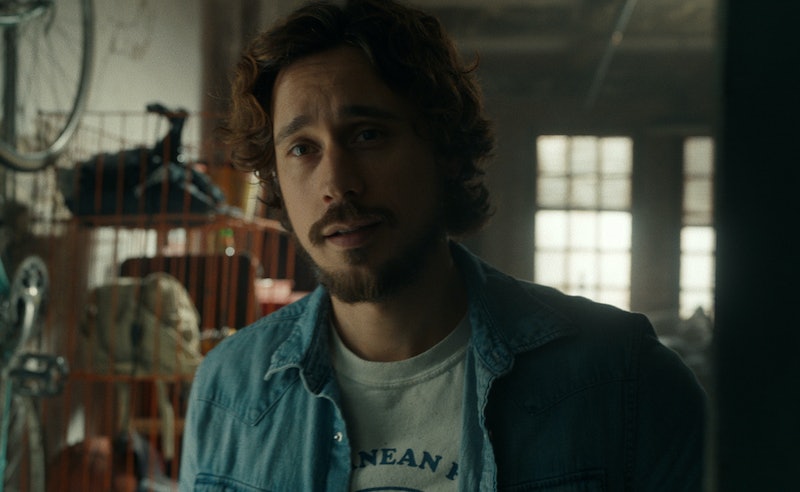 There are a number of mysteries at the center of Showtime’s Yellowjackets, a coming-of-age horror story about a group of teen girls forced to survive in the wilderness after their plane crashes. Jumping between the aftermath of the crash and 25 years later, the show sets up several important questions. Who is the girl the team kills and cannibalizes that was teased early on? What dark force seems to be stopping them from leaving the forest? And why is Taissa eating dirt?!

In comparison, Shauna’s affair with artist and auto body shop owner Adam seems pretty inconsequential. But fans have been suspicious of him for weeks, and Episode 8 leads to several theories about who Adam really is. It feels far too convenient that he got into a minor car accident with Shauna and then just so happened to be at the hotel she followed her husband to. Even Shauna’s daughter points out that the name “Adam Martin” returns no results online, despite him being an artist who would assumedly want to publicize his work. He’s also quick to give Shauna very specific examples about his girlfriend’s time at Pratt (which he initially claimed he attended himself until she caught him in the lie) and his supposed older brother in Michigan. Most damningly of all, Shauna finds glitter in the closet and discovers that her journals are missing after Adam hides there — seemingly confirming that he’s been the one blackmailing her and the other surviving Yellowjackets all along. Here are all the major theories about who he really is so far.

Adam Is A Con Man

If you were to ask Shauna’s daughter, she’d say Adam is probably just a scammer trying to capitalize on Shauna’s fame as one of the crash survivors. “What if he’s conning you, mom?” she asks Shauna in Episode 8. “Sleeping with a Yellowjacket so he can turn around and sell the story?” If this is true, it would dovetail nicely into him being the supposed blackmailer.

Adam Is A Stalker

Thanks to a past article, it seems that Shauna, Taissa, Natalie, and Misty are pretty well-known. (It’s still unclear who else escaped the forest and where they’re currently living.) Is it possible that Adam planned the car accident and the hotel meet-cute as a way to get closer to Shauna, one of the few recognizable survivors? Is he simply an armchair detective who’s obsessed with the Yellowjackets’ story and is now trying to get close to the survivors?

Adam Is From The Forest

As Reddit user @smallangrybarista pointed out, Adam’s back tattoo eerily has the same geometric shapes as the symbol that keeps appearing in the show. Some think this could mean that Adam was taken by whoever is casting a spell on the forest, while other think the tattoo means Adam is in a cult related to the Yellowjackets’ time in the woods.

Adam Is Just A Red Herring

It’s also possible that the person who had the glitter on them — and who stole Shaun’s journals — was actually Jeff, not Adam. Journalist Rachel Simon theorizes that Adam is just there to distract us from that fact that Jeff is hiding something — and likely not an affair, as Shauna believes.

Adam Is An Adult Javi

A very popular theory is that Adam is actually an adult Javi. He seemed to have a crush on her when they were kids and carved a wolf statuette for her when they were in the woods. This theory doesn’t make a ton of sense though, since you’d expect Shauna to recognize Javi even after he’s grown up. A Twitter user also pointed out that if Javi Martinez was really going undercover as Adam, he probably wouldn’t choose such a similar last name as “Martin.”

Adam is Shauna’s or Jackie’s Son

One particularly disturbing, Oedipus-esque theory is that Adam is actually Shauna’s child that she had in the woods. Others think Adam is Jackie’s son, and he’s targeting Shauna to get revenge for whatever happened to his mom. But this theory hinges on the idea that Jackie made it out of the woods, which is yet to be confirmed but is possible based on her journal that Shauna finds in Jackie’s room.

Adam Is A Journalist

Jessica the so-called journalist ended up being a private investigator hired by Taissa. But that doesn’t discount that there could be other real journalists still trying to dig into the Yellowjackets’ story. When they went on a mini golf date, Adam wanted to know quite a bit about what happened to Shauna in the wilderness.

Adam Is Related To The Cannibal Victim

Thanks to the horrific opening scene of Yellowjackets, we know that some of the survivors eventually killed and ate one of their fellow teammates. We don’t yet know who the victim was — or who ate her, other than Misty — and the survivors have been careful to keep the truth of what happened out of the press. But there’s been plenty of public speculation about what happened, so there’s at least one family out there still looking for answers.

One of the strangest theories tossed around on Twitter is that Adam is a trans man and Shauna’s former best friend. That would be quite a twist, but it makes no sense considering Adam is much younger than Shauna and frankly looks nothing like Jackie.

The final two episodes will reveal — if not get us closer — to the truth about Adam, but according to Melanie Lynsky, who plays Shauna, there’s one theory viewers haven’t figured out yet. “Yes I’ve read your Adam theories, and just so you all know, there’s one that basically no one has mentioned yet,” she tweeted. “I’m surprised, but also not surprised!”

More like this
'The Last Of Us' Video Game Revealed Tess’ Fate In The HBO Series
By Brad Witter
'That '90s Show' Is Officially Coming Back For Season 2
By Gretchen Smail and Grace Wehniainen
The Plane Crash In 'Dear Edward' Is Based On A 2010 Tragedy
By Grace Wehniainen
Keyla Monterroso Mejia Is Finally The Star Of The Show
By Gabrielle Bondi
Get Even More From Bustle — Sign Up For The Newsletter
From hair trends to relationship advice, our daily newsletter has everything you need to sound like a person who’s on TikTok, even if you aren’t.