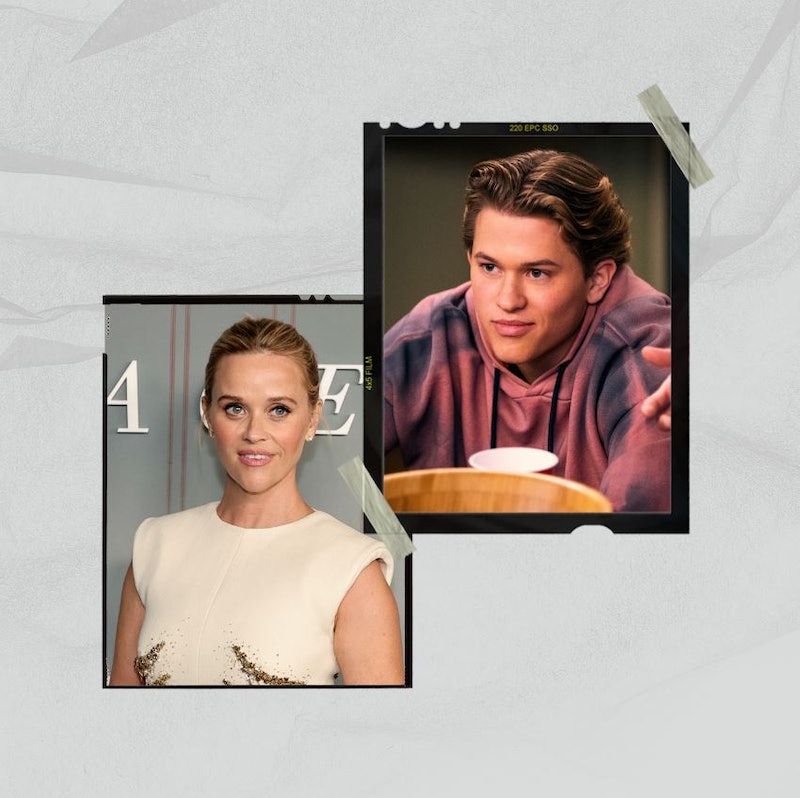 Reese Witherspoon has always been a proud mom, so it’s no surprise that she made sure to catch son Deacon Phillippe’s acting debut in Never Have I Ever Season 3 on Friday, Aug. 12. Multitasking like a champ, the Oscar winner fit in a marathon-viewing session the day the new episodes dropped. She watched the Netflix series from the comfort of a hair and makeup chair, and she even shared her experience with fans.

Apparently, Witherspoon has a lot more chill than many parents. She didn’t specifically call attention to the fact that her and fellow actor Ryan Phillippe’s son plays private school student Parker in the series; instead, she focused on how much she’s been enjoying the Mindy Kaling show as a whole.

“I’m binging Never Have I Ever … it’s so good!” she told the camera in the first of three Instagram stories where she can be seen watching it on a cellphone. “It’s really funny.”

In another story, the actor gushed over newcomer Anirudh Pisharody, who plays Parker’s classmate Des. “Oh my god, he’s so cute,” she said of her son’s co-star. As she watched, she gasped in shock, explaining that two characters were “fully making out.” From there, Witherspoon reacted mid-marathon yet again, letting fans know she’d gotten hooked. “I got to go to the next episode,” she said. In text, she added, “Now I can’t stop !!!!!” and “This show is soooo good !”

Witherspoon’s appreciation for the show — and for Des, specifically — was a moment for some of the cast. “SPEECHLESS,” Pisharody wrote, sharing the story in which the lauded actor calls him “so cute.” Except, he wasn’t speechless. “Not an American ICON noticing me in any way freaking out rn send help,” he added.

Meanwhile, Phillippe shared his own story about his Never Have I Ever role on Aug. 13. “Couldn’t have asked for a better first acting job,” the 18-year-old wrote over a screenshot showing a new episode from Season 3 on Netflix. “Catch me in episodes 7 & 8,” he added.

His mom’s friendship with Kaling helped the recent high school grad land the part. “Reese had told me that he was interested in performing... and I only had this role that seemed really good for him,” Kaling told Entertainment Tonight just days before Season 3 premiered. “He’s so super talented, obviously really handsome, but here’s this kid who’s been raised by two very successful actors and he wanted to learn. He came to set, he really wanted to learn from our cast and I just love that energy.”

Phillippe isn’t limiting his learning to acting, either. Earlier in August, he announced “a little project” on Instagram. It turned out to be his first mixtape, Justakid, which he released on Soundcloud on Aug. 5, explaining in an IG post that he’d made it with his best friends. Once again, Witherspoon was there to support him. “So proud of You!” she commented.

More like this
Here’s Everything Coming To & Leaving Netflix In October
By Jake Viswanath
Caleb McLaughlin Details Racism From 'Stranger Things' Fans
By Radhika Menon
The ‘Emily In Paris’ Season 3 Release Date Is Here, Plus The First Footage
By Bustle Staff
Shaina Explains Why Natalie’s 'Love Is Blind' Text Claims About Shayne Have “No Validity”
By Grace Wehniainen
Get Even More From Bustle — Sign Up For The Newsletter