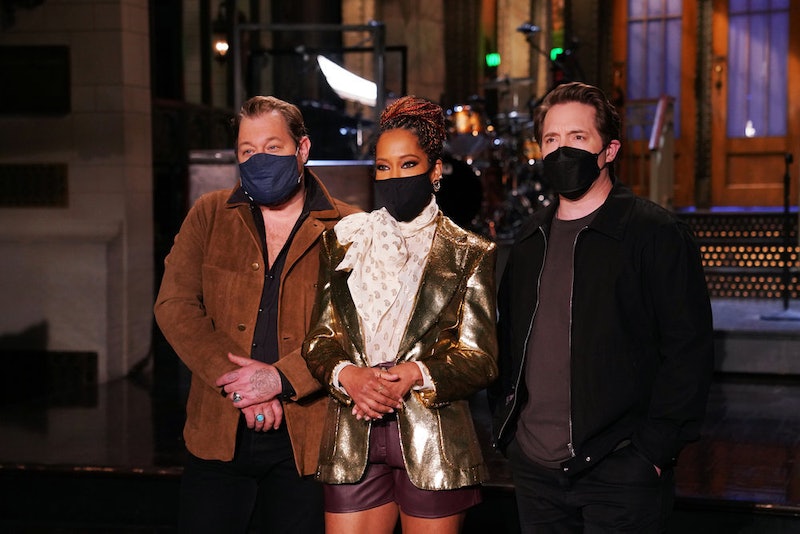 Regina King can finally add hosting Saturday Night Live to her list of growing accomplishments. The If Beale Street Could Talk Oscar-winning actor and One Night in Miami director took the stage for the Feb. 13 episode. Fittingly, in her first-ever SNL monologue, Regina King talked about her successful career, and joked about the joys and struggles of being a famous Black creative.

She opened the monologue by explaining that she grew up watching Saturday Night Live. "I remember watching Eddie Murphy on the show when I was a little kid, and thinking, 'Wow, someday I'll be on that stage.' Then he left and I was like, 'Hm, I'm good,'" she joked. "I'm kidding. It's such an honor to be here."

"But I'm not complaining," she added. "I kind of like it that way. Whenever Black fame gets too crazy for me, I just go to the nearest white town and I'm a regular old suspicious shopper again."

She then joked that Lorne Michaels said that if she was ever feeling nervous on stage, she could always play "the race card." Then, she said, sounding confused, "He did a little shoulder shimmy and then moonwalked out of my dresser."

Kenan Thompson later came out dressed in a bucket hat and a gold chain. He claimed he had no particular reason to be dressed like that, and then whipped out a mic and airhorn. "Did y'all hear that? My girl is out here killing it," he said, hyping up the crowd after King talked about her directorial feature film debut with One Night in Miami. "My dude, you still ain't clapping loud enough," he said, pointing to someone in the audience.

King bashfully told him to stop, saying, "I'm a trained actor, I don't need all of that." But Thompson is right in bragging about King's career. Recently, she was nominated for a Golden Globe and a Screen Actors Guild Award for One Night in Miami, and last year won an Emmy for Watchmen. While she's best known for her dramatic roles, King demonstrated on SNL that she absolutely has comedic chops as well.

Fittingly, ahead of her own debut, Feb. 6 host Dan Levy left King a sticky note on her backstage mirror. "Regina! You got this! Much Love, Dan," the note read. As King proved tonight, Levy was absolutely right.

More like this
Michael B. Jordan Tackled His "Public Breakup" With Lori Harvey On 'SNL'
By Brad Witter
Who Is Pete Davidson Dating? He & Chase Sui Wonders Got Caught Kissing
By Jake Viswanath
The Black Lotus Staff Has "Had Enough" In The 'White Lotus' Spoof From 'SNL'
By Brad Witter
Here's Everyone Who Will Be Competing In 'Survivor' Season 44
By Brad Witter
Get Even More From Bustle — Sign Up For The Newsletter
From hair trends to relationship advice, our daily newsletter has everything you need to sound like a person who’s on TikTok, even if you aren’t.