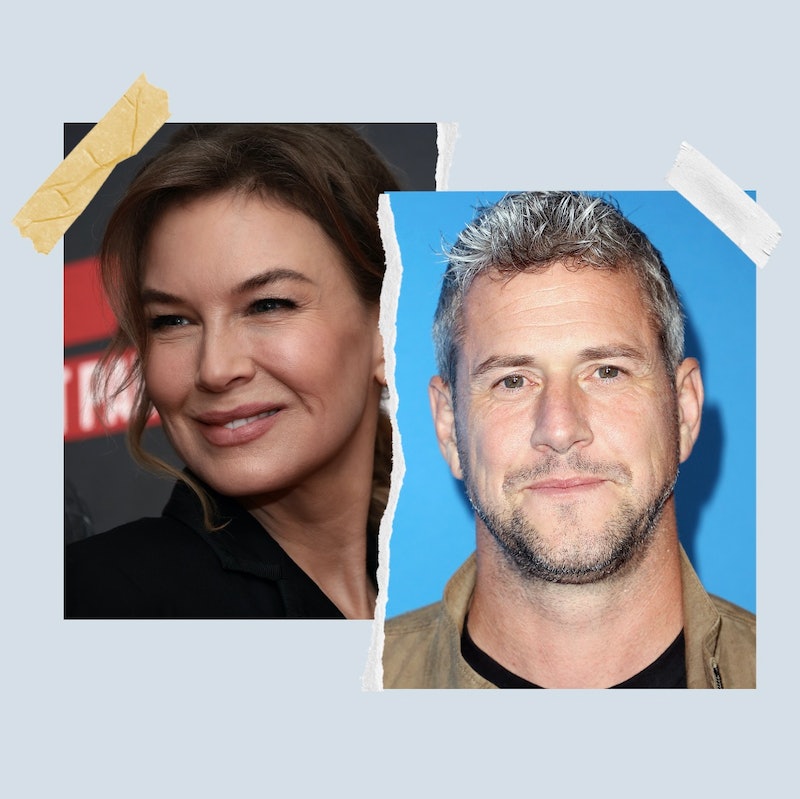 Renée Zellweger is an Oscar winner, but unlike many of her fellow acclaimed peers, there’s not much the public knows about her beyond her acting roles. However, her most recent romantic relationship, with English television presenter and motor specialist Ant Anstead, has given Zellweger’s fans more of a glimpse into her personal life.

Both Anstead and Zellweger have been married to other people before — Anstead twice, most recently to Flip or Flop’s Christina Hall (formerly Christina Haack) — and he told Us Weekly in January 2022 that another marriage was not in the couple’s future anytime soon. “I mean … what’s the rush?” he said. As Anstead’s divorce from Hall was only finalized in July 2021, it’s not surprising that he’s not in a hurry to tie the knot again.

Read on to learn more about the couple’s romance.

The catalyst for Zellweger and Anstead’s relationship was, perhaps unsurprisingly, a television show. The couple met in June 2021 while filming an episode of Celebrity IOU: Joyride, Anstead’s Discovery+ series. Zellweger’s episode involved renovating cars for the twin nurses who cared for her friend and former publicist Nanci Ryder, who was diagnosed with ALS in 2014, prior to her 2020 death. The actor thought the cars would be a perfect way to honor and thank the brothers. But filming the episode also ended up sparking the pair’s romance, despite Zellweger’s wild driving.

Although the couple didn’t confirm their romance until attending a public event together in August, they were seen getting cozy in public together throughout July, and Zellweger even made a couple of appearances on Anstead’s Instagram story. The TV presenter also spoke about meeting Zellweger while co-hosting Entertainment Tonight in August. “The right time is often the most unexpected,” he said of their relationship. “There’s absolutely no way it was something I expected, but there’s something magical in that, right?”

Anstead and Zellweger’s relationship hit a key celebrity relationship milestone in September 2021 with his first Instagram grid post of them.

Zellweger keeps the details of her personal life relatively private and doesn’t even use social media, but Anstead is much more active, making it unsurprising that he was the one to make their romance Instagram official.

Throughout the fall, Zellweger was spotted spending time with Anstead and his youngest child Hudson. Anstead also took a couple of trips to New Orleans in order to visit Zellweger while she worked on her new limited series The Thing About Pam. In October, Anstead shared a snap of the two stars kissing. The pair also spent Thanksgiving together and took Hudson to a Saints game.

Anstead spent time with his young son decorating their Christmas tree, and he shared a few snaps of the process on Instagram. One of the pictures he uploaded was of an ornament that he’d hung of two smiley characters in a tree hauling a little tree. The yellow figures were named Ant and Renée, and it was there to commemorate their first Christmas together. The HGTV star told Entertainment Tonight that he and Zellweger had “plans” to see one another over Christmas, but he remained relatively coy in the chat. Although the two each had busy holiday seasons, a source told Us Weekly that they were planning to spend New Year’s Eve together.

January 2022: Not Getting Married Soon

Speaking to Us Weekly in January 2022, Anstead commented that while some may have suggested that wedding bells were already ringing, that was not the case. “Oh, absolutely not,” the TV host answered when asked whether he and the star actor were getting married. “I mean … what’s the rush” he said before also divulging that he hadn’t thought yet about having more kids with the Oscar winner.

Ahead of the release of her new TV show The Thing About Pam, Anstead congratulated his love on Instagram, while also making light of the character she plays, who is less than reputable. He shared a snippet of the program, which debuted on NBC on March 8, and he started his caption with the joke, “Beaming with pride (and now sleeping with one eye open!) Ren’s latest role!”

More than six months after the start of their relationship, the notoriously private Zellweger opened up a bit about meeting Anstead in an interview with Harper’s Bazaar. When asked by the interviewer about whether she thought Nanci Ryder, her friend who died from ALS, had brought her together with Anstead, Zellweger responded, “Yeah, we do joke about that. She’s always doing her best. It made me smile. It made me smile to think on this, yeah, the serendipity of it all.”

On April 23, Anstead posted a throwback picture on Instagram of he and Zellweger that captured the first time they met. The two were smiling, and the TV host captioned the snap, “WOW! This just popped up in memories One year ago today! Sat on the back of a fire engine on the final day of filming having handed two amazing men a car as a thank you from Ren Amazing what can happen in just one year…….” Two days later, Anstead took to his Instagram story to wish his girlfriend a happy birthday, captioning a sweet black and white photo of the two, “Happy Birthday to this beautiful Lady! Ren you are PURE CLASS! I know how lucky I am.”

While his relationship with Zellweger is heating up, Anstead is still dealing with his ex-wife, and as time goes on, it seems things are becoming more contentious between the two. On April 28, Antstead filed for sole custody of the son he shares with his ex, 2-year-old Hudson London. Just one day later, she fought back against claims that she isn’t spending enough time with her child, saying that she is “shocked to see the false allegations against me and [Anstead’s] belief that he has been failing to protect our son by sharing custodial time with me.”

In a May 8 Instagram post, Hall posted a photo with her husband Josh Hall, and the caption is seemingly in response to the custody battle and her partner’s support throughout it: “May has never been a great month for me. Not sure what that means astrologically or spiritually but I’ve had some of my worst times in May. The difference is this May I have a man who treats me with unconditional love and respect. Standing by me and helping me through these times as I feel like I’m being sucker punched left and right. It’s when you have your lowest moments that test your relationship when you really see what kind of people you are together. If you have a person who loves and respects you hug them extra tight tonight because trust me not everyone has this.”

This article was originally published on April 12, 2022