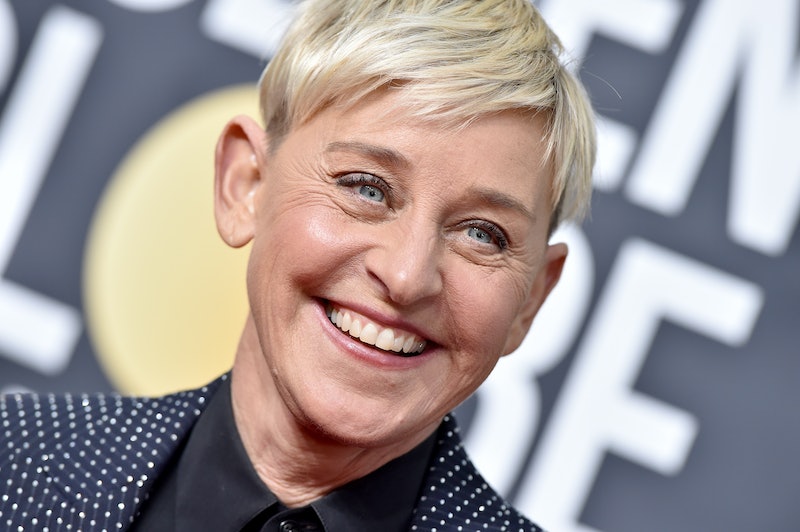 After numerous claims from current and former employees alleging a toxic workplace environment, some people are ready to say goodbye to The Ellen DeGeneres Show, and they've got some suggestions for who should replace Ellen DeGeneres. The popular daytime talkshow is currently dealing with some major fallout from allegations ranging from instances of sexual harassment, misconduct, racism, and microaggressions, as detailed in two recent BuzzFeed reports. And on Saturday, Aug. 1, The Daily Mail posted a report claiming that DeGeneres wants out of the show before her brand, which is built on a philosophy of kindness, is permanently damaged. While the show's executive producers have denied the rumors that the talk show host is considering making an exit from her long-running series, that hasn't stopped Twitter from offering up #ReplaceEllen suggestions ranging from Tiffany Haddish to Dakota Johnson, who famously called DeGeneres out for claiming she wasn't invited to the actor's 30th birthday party.

If DeGeneres really does exit her show in the near future, The Sun claimed that James Corden, the host of The Late Late Show on CBS, is the top brass at NBC's first pick to step into the hosting role. But Twitter isn't sold on the idea. While Corden has made his late night show a hit with segments like "Carpool Karaoke," there are plenty of women, people of color, and members of the LGBTQ+ community who deserve a show of their own. And just in case NBC and Warner Bros. Entertainment doesn't have time to do the legwork, Twitter has some A+ suggestions for who can rescue the popular chat show from cancellation.

Johnson was one of the first celebrities to publicly challenge DeGeneres' reputation as the "Queen of Nice" when the host tried to claim she wasn't invited to the actor's birthday party. The 50 Shades of Grey star quickly shut DeGeneres' claims down, and fans think she should be rewarded for her willingness to call the host out on national television.

Haddish is hilarious, giving, and a total star. There's no doubt that she's the daytime talk show host that America needs right now; the only question is: does she have time to give away trips to unsuspecting audience members while also being one of Hollywood's go-to leading actors? If she's up for some multitasking, then her fans are ready to follow her wherever her career takes her.

Look, Garner's nice personality is not up for debate. She's always been known as one of Hollywood's kindest stars, and she's been practicing her talkshow hosting skills on her Instagram, where she often creates skits and funny clips of faux cooking shows or DIY home improvements. If she wants to turn The Ellen DeGeneres Show into a cooking/chat show hybrid, she has the internet's full support.

This choice is a bit more economical. If NBC casts Page, they'll barely need to change the name of the show (and no need for new merch designs either). Meanwhile, viewers would get a host whose passion for LGBTQ+ rights and making change in Hollywood is well documented.

Sykes had her own talk show for one short season on Fox in 2009, and viewers have been wanting more ever since. Now seems like the perfect time to bring the comedian back to daytime TV where she can get real about issues and serve up celebrity interviews all at the same time.

Anyone who has seen Nailed It! on Netflix knows that Byer has an enthusiastic, joyful hosting style that makes watching her a treat. As long as she doesn't have to leave her Netflix job behind (she's irreplaceable and the Pinterest-fail show is a bright light in this dark world), she would be the perfect successor to DeGeneres.

Cox isn't just a class act, she's an Emmy-winning actor whose Instagram feed is so cool, it's hard not to wish you were her best friend. She also recently handled a bit of live TV awkwardness during the 2020 Emmy nominations announcement with grace, proving she has what it takes to host her own show.

DeGeneres has taken great joy in scaring American Horror Story actor Paulson every single time she's appeared on The Ellen DeGeneres Show. There would be no sweeter revenge than seeing Paulson make the chat show her own and ban jump-scaring guests forever.

Sure, she's already hosting the upcoming Supermarket Sweep reboot, but Jones is the ultimate multitasker. She also gets super into TV and movies, and her enthusiasm would be more than welcome on the daytime TV landscape.

DeGeneres hasn't given any indication that she's leaving her talkshow, which is currently undergoing an internal investigation by Warner Brothers. But, should the comedian decide to step back after 17 seasons, it's clear there's a wealth of talent that could fill her daytime talkshow slot.