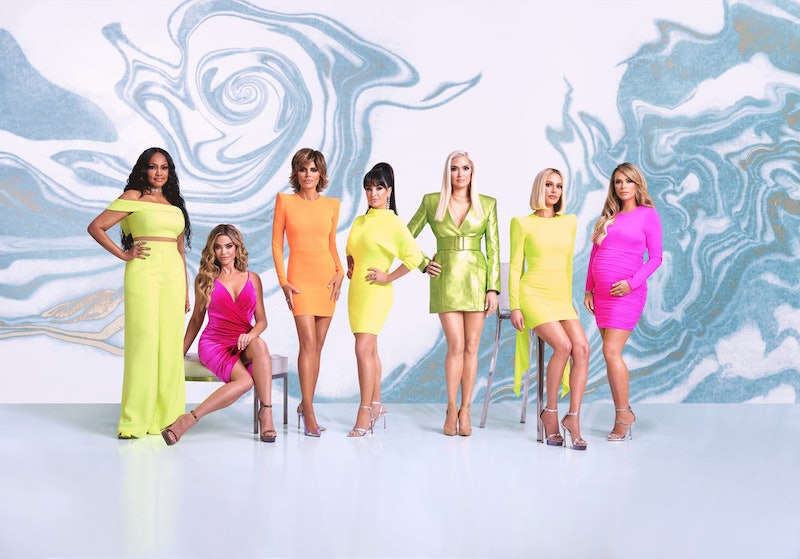 Update: Bravo announced on April 12 that RHOBH Season 11 will premiere on May 19. Kyle Richards, Lisa Rinna, Erika Girardi, Dorit Kemsley, and Garcelle Beauvais are all set to return, as is Sutton Stracke, who will move from “friend” to a full-fledged housewife. The season will also include new housewife Crystal Kung Minkoff and friend Kathy Hilton.

Earlier: With all the wild accusations and rumors from The Real Housewives of Beverly Hills Season 10 (mostly) put to bed, viewers are already looking ahead to RHOBH Season 11. Although Bravo has yet to make an official renewal announcement, a forthcoming new season is less of a matter of if than when. RHOBH led the ratings among cable shows on Wednesday nights, according to Variety, and there's certainly plenty of drama to spare for seasons to come.

In fact, the returning wives could already be shining their diamonds. The Bravo reality series kicked off last season with the cast jetting off to the Big Apple for New York Fashion Week, which Bravo shot in September 2019. The network typically reveals the new seasons a month ahead of the premiere date, and the official Season 10 announcement arrived in March.

One wife who definitely won't be back for Season 11? Denise Richards. Her rep confirmed to Variety on Sept. 9 that the Wild Things actor was leaving RHOBH after two seasons. The news came as little surprise to many, given that drama between Denise and Brandi Glanville dominated the season, with Bravo announcing that Denise "stopped shooting with the group" toward the end of production in December. (She did, however, appear on all three parts of the RHOBH Season 10 virtual reunion.) "I'm just upset that we couldn't reach an agreement for next season, I'm kind of living in that sadness," executive producer Andy Cohen recently told People. "We were negotiating a deal with her and we couldn’t reach an agreement on the deal."

Despite initially saying in an August SiriusXM interview that she wouldn't come back if Denise didn't return, Season 10 newcomer Garcelle Beauvais later hinted that she'll be in the RHOBH Season 11 cast. During an interview on The Jenny McCarthy Show after news of Denise's departure broke, Garcelle discussed her strained friendships with Kyle Richards and Lisa Rinna, noting they're "probably going to wait and [sit down and talk things out] on camera. She also noted that Lisa had warned her she'd be a target in her second season on the show.

As far as which other cast members will return, Erika Jayne admitted to Bustle in May that it's "tough to speculate," but her plan is to keep coming back "until it's not fun anymore." She added, "Listen, everyone has to do what is right for them at that time. Who knows?"

More like this
Everything To Know About 'RHONY' Season 14
By Jake Viswanath and Alyssa Lapid
Everything To Know About Danna Bui-Negrete From 'RHOSLC'
By Jake Viswanath
Twitter Is Still Reeling Over Tyler’s 'Strictly' Exit
By Sophie McEvoy
Yes, That Is Victoria & Another ‘BiP’ Alum In Zach’s ‘Bachelor’ Trailer
By Kadin Burnett and Grace Wehniainen
Get Even More From Bustle — Sign Up For The Newsletter