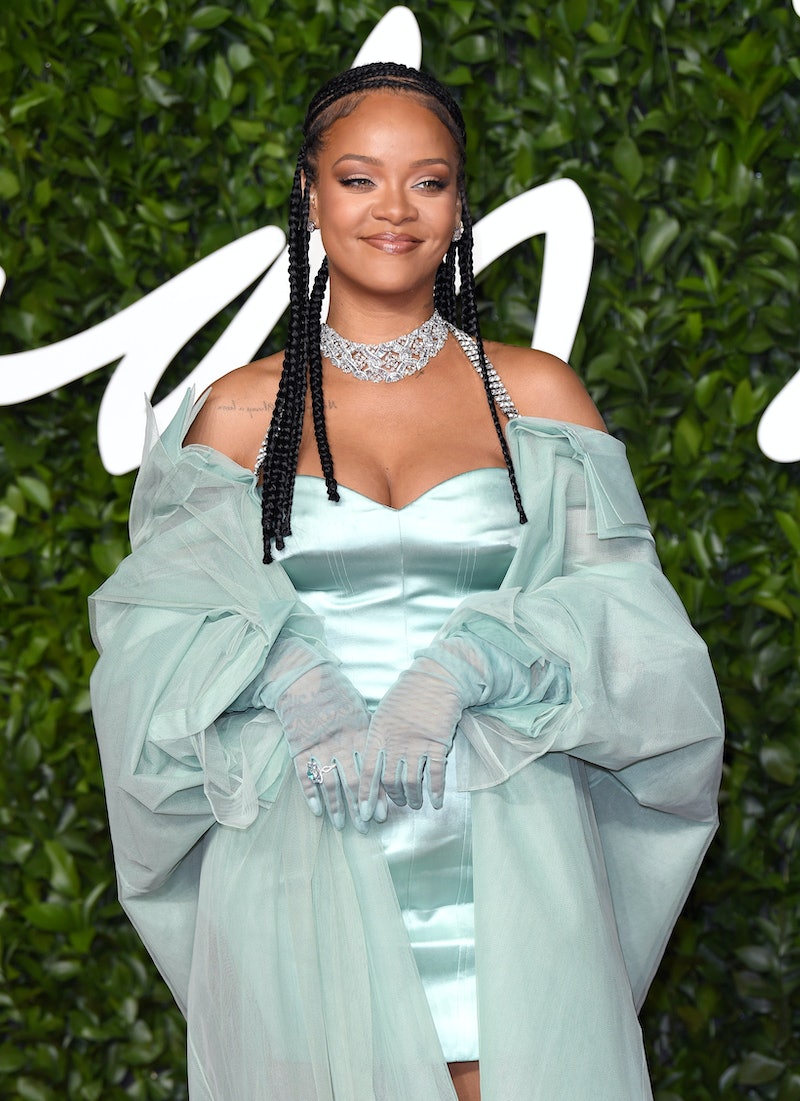 The wait for Rihanna's new album isn't over, but the singer promises her new music will be worth the wait. During a recent interview with Entertainment Tonight, Rihanna gave an update on her next album, promising fans that they will "not be disappointed" by her new music. When the long-awaited R9 comes, the star promises it will definitely fulfill fans' expectations.

Though it's been four years since the release of her last album, ANTI, Rihanna revealed that she is "constantly" working on new music in order to perfect her next release. "I am always working on music," Rihanna told ET. "I am always working on music and when I am ready to put it out in the way that I feel fit, it's gonna come out. And you're not going to be disappointed when it happens. It's going to be worth it." And while she knows that fans are clamoring for her to release R9, as fans call it, Rihanna explained that she won't release it until she's satisfied with it. "I'm not just gonna put it out just because people are waiting," she added. "It's taken this long, I'm gonna make it worth it."

Rihanna has been teasing her fans about releasing new music since December of 2018, when she told fans that she planned to drop R9 "sometime in 2019." The following September, Variety reported that the singer had just signed a an overall deal with Sony/ATV music publishing, though she didn't release any music in the months following those reports.

In October 2019, Rihanna told Vogue that she has been working on a "reggae-inspired" album over the past few years. "It’s not gonna be typical of what you know as reggae," she continued, adding, "But you’re going to feel the elements in all of the tracks." She followed that up a few months later with a joking Instagram post, where she told fans that she was "listening to R9 by myself and refusing to release it."

"I like to antagonize my fans a little bit," the singer joked to Entertainment Tonight in February 2020, referencing the many memes and comments she's posted about her upcoming album — including that Instagram post. "Well, they antagonize me, too! So, they get it right back." In her last album update in April, she revealed that she's too busy "saving the world" in the wake of the ongoing coronavirus pandemic to focus on dropping a new album. "If one of y'all motherf*ckers ask me about the album one more time when I'm tryna save the world, unlike y'all president," she said during an Instagram Live, adding that she'll take them "on sight!"

While Rihanna has admitted multiple times that she "can’t say when I’m going to drop" the album, the singer has offered a few clues about what fans can expect when R9 is finally released. “I don’t want my albums to feel like themes," she told Vogue UK in their March 2020 issue. "There are no rules. There’s no format. There’s just good music, and if I feel it, I’m putting it out."

Adding that she does still plan to release a reggae album as well, Rihanna continued, "I feel like I have no boundaries. I’ve done everything – I’ve done all the hits, I’ve tried every genre – now I’m just, I’m wide open. I can make anything that I want." Now, fans just have to continue to hold on until she's finally ready to share what she's made with them.

More like this
Rihanna Shares Video Of 'Black Panther 2' Filmmakers' First Reaction To “Lift Me Up”
By Radhika Menon
Twitter Can’t Believe The Madonna Biopic Is Scrapped & Fans Have A Solution
By Alyssa Lapid
Beyoncé & Blue Ivy Performed A "Brown Skin Girl" Duet At Her Private Dubai Concert
By Brad Witter
Lewis Capaldi Is “Really Sorry” After Pre-Sale Ticket Fiasco Guts Fans
By El Hunt
Get Even More From Bustle — Sign Up For The Newsletter
From hair trends to relationship advice, our daily newsletter has everything you need to sound like a person who’s on TikTok, even if you aren’t.