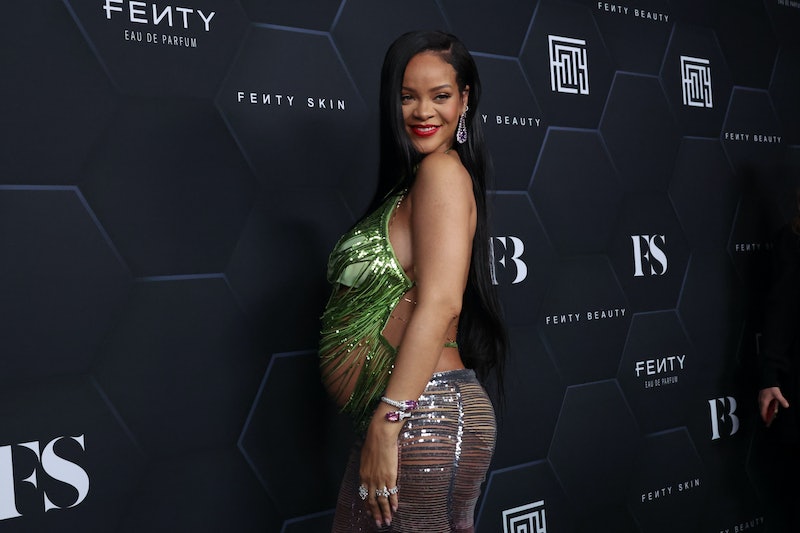 Rihanna is usually a private person, but the soon-to-be mom opened up a bit more than usual during a recent red carpet celebrating her companies Fenty Beauty and Fenty Skin. During an interview with Entertainment Tonight, the billionaire updated fans about her pregnancy, the likelihood for a “Fenty Baby” brand, and the progress of any new music that may or not be inspired by her pregnancy. “Well, yes, you’re still going to get music from me,” Rih said. “Not a lullaby. My fans would kill me if they waited this long for a lullaby. [They’d say,] ‘We are grown!’”

Rihanna hasn’t released an album in six years, when she dropped Anti in January 2016. New music from her has been delayed by many years due to her thriving businesses and now her baby, so her stans have become known for constantly asking the nine-time Grammy winner when she’ll unleash her next album. This is largely because for the bulk of her career, Rihanna kept to a rapid-fire release schedule that earned her 14 No. 1 hits on the Billboard Hot 100 (the third most No. 1s out of any artist in history, only behind The Beatles and Mariah Carey). Between 2005 and 2012, Rihanna delivered seven albums with the deluge of hit singles never stopping. The first sign that things were slowing down came when it took her four years to release 2016’s Anti.

While the 33-year-old hitmaker hasn’t delivered a studio album in quite some time, she has still been active, on and off, in the music world. Since she stopped promoting Anti, Rihanna has scored chart hits as a featured artist on singles fronted by N.E.R.D. (“Lemon”), Future (“Selfish”), DJ Khaled (“Wild Thoughts”), Kendrick Lamar (“Loyalty”), and PartyNextDoor (“Believe It”). The latter song, which came out in 2020, stands as her most recent single release.

Rih On Her Pregnancy & “Fenty Baby”

During the same red carpet interview, Rihanna elaborated on how her first pregnancy is going, saying that she’s “trying to enjoy it as much as I could.” She called the pregnancy “an exciting journey so far,” insisting that she’s “just taking it as it comes every week. There’s always something new and I’m just taking it and I’m enjoying it.”

When ET’s Rachel Smith asked her, “When are we going to get Fenty Baby,” Rih reacted with a playfully overwhelmed expression. “Well,” Rihanna said, laughing. “One thing at a time.”

When news of Rihanna’s pregnancy broke at the end of January, many fans were happy for her and longtime boyfriend A$AP Rocky, but some seemed convinced that her new role of mother — not to mention her several billion-dollar businesses to run — would detract from her making music. This new ET interview appears to put some of those concerns to rest.

And while Rihanna has started speaking about her experience carrying her first child, details are still scarce regarding when the child might arrive, whether it’s a boy or a girl, or what names the musicians are considering (though there have been hints).

More like this
Mariah Carey Is Releasing Her “Lost” '90s Grunge Album
By El Hunt
Everything To Know About Taylor Swift’s 10th Studio Album, 'Midnights'
By Grace Wehniainen and Jake Viswanath
Lizzo Twerks While Playing James Madison's 200-Year-Old Crystal Flute Onstage
By Radhika Menon
Twitter Is Freaking Out Over Rihanna’s 2023 Super Bowl Halftime Show Announcement
By Stephanie Topacio Long
Get Even More From Bustle — Sign Up For The Newsletter