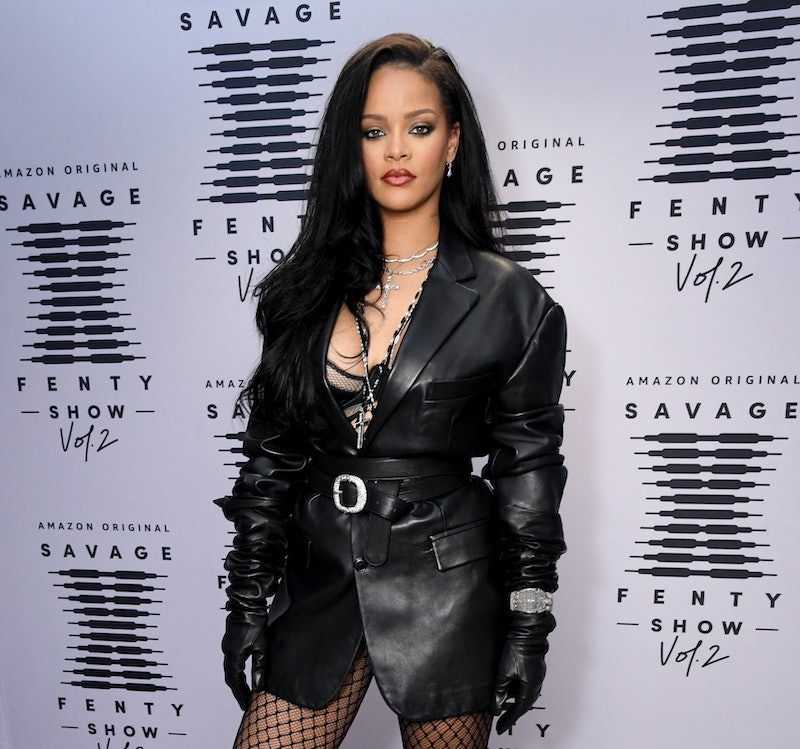 Since Rihanna's last album Anti was released in 2016, Donald Trump became president, Ariana Grande and Taylor Swift released three albums combined, and the COVID-19 pandemic stopped the world in its tracks. Needless to say, the Navy has been waiting for a long time for R9, and while they have to be even more patient, she's making more progress than ever. Rihanna's newest music update shows that she's working through COVID-19 — even though the pandemic is just another in a long list of reasons why her new album has been endlessly delayed.

In a new interview with the Associated Press, Rihanna revealed that she has held "tons of writing camps" — where prolific songwriters come together to create tracks for one superstar — specifically for her new album. The singer didn't give an update on how much of R9 she has completed, but she did say that she has been working on curating the album, asking herself, "What do I feel personally? What do I want to put out, and as an artist, how do I want to play it with my art? How do I want to interpret that?"

Since Anti, the entrepreneur has been keeping busy with her many businesses, including the recent launch of Fenty Skin and her lingerie line Savage x Fenty. (The brand's second fashion show will premiere on Amazon Prime Video on Oct. 2.) However, Rihanna promised that she is still devoted to music. "You do pop, you did this genre, you do radio, but now it’s just like, what makes me happy?," she said, hinting that her music won't be full of coronavirus blues. "I just want to have fun with music. Everything is so heavy. The world that we live in is a lot. It’s overwhelming every single day. And with the music, I’m using that as my outlet.”

However, much like everything else, Rihanna's R9 process has been drastically affected by COVID-19. In another interview with Entertainment Tonight, the singer admitted that the pandemic has impacted "everything," including the timing for her next album. Many fans were hoping for a new album to arrive by the end of 2020, and despite coronavirus, there's still hope. "I'm that type of girl where I just want to figure out a solution," she told ET of her determination to work through the pandemic. "I don't want to stay stuck on the problem. With COVID-19, every day has been, 'So what do you do about it?'... It's forced me to figure things out and get creative and clever about it."

Even though she made no promises, RiRi's latest update is actually more promising than a few of her previous ones. Back in April, the singer fired back at fans who were asking about new music while she was explaining the work of her Clara Lionel Foundation. "If one of y'all motherf*ckers ask me about the album one more time when I'm tryna save the world, unlike y'all president," she commented on an Instagram Live session, adding that she would take them "on sight!" In July, however, she hinted that her new music was going to drop "sooner than fans think" in an interview with Access Hollywood.

According to her latest update, Rihanna is so close to releasing new music, she's already thinking about how to release it. "I want to go on tour but I can’t, so I’m stuck with music that I love, and now I’m trying to figure out how I can even create visuals to that," she told AP. "That’s a challenge as well. But I love challenges so, you know, I’m gonna get it done."

More like this
Rihanna Is America's Youngest Self-Made Woman Billionaire, According To 'Forbes'
By Hugh McIntyre
What Is Ariana Grande's Net Worth? When It Comes To Money, She Has No “Problem”
By Hugh McIntyre
Adele Says It Would Be “Wonderful” To Have Kids With Boyfriend Rich Paul
By Jake Viswanath
Britney Spears’ Honeymoon Plans Include Watching This Movie With Her Husband
By Grace Wehniainen
Get Even More From Bustle — Sign Up For The Newsletter