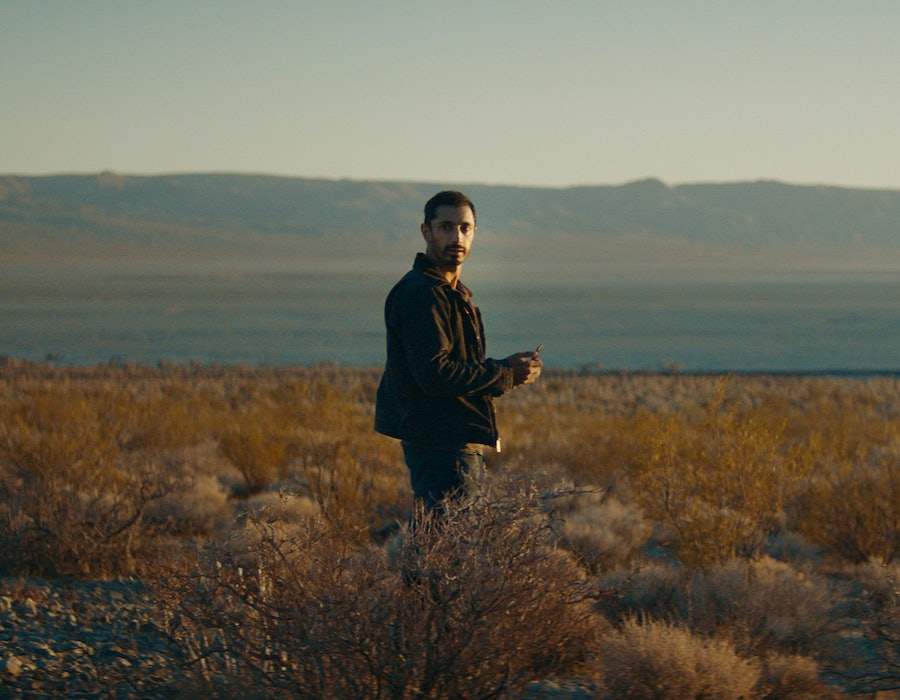 As a kid, Riz Ahmed had no problem picturing himself as an actor. Despite a dearth of Pakistani and Muslim characters on the British telly, he still felt a kinship with the people broadcast into his living room. “That’s the amazing thing about stories,” Ahmed tells Bustle. “You imagine yourself into all kinds of people’s experiences.”

The award-winning actor, sometimes rapper, and certified social justice zaddy has had some pretty good experiences of his own recently, both on and off-screen. Last year, he got married to novelist Fatima Farheen Mirza and celebrated an Oscar nomination for The Sound of Metal; now, he’s starring in two more films. In this month’s Encounter, he plays a father trying to save his children from deadly parasites. In Mogul Mowgli, which came out in September, he’s a rapper battling an autoimmune disease. Both of these roles are departures from the terrorists and convenience store clerks that Muslim actors like Ahmed are often relegated to, and that’s not a coincidence. “I feel like I never took on those roles from the beginning of my career because I was conscious of it,” Ahmed says. “I was adamant that I wanted to do the opposite of those roles.”

There’s a fine line between responsible representation and perpetuating stereotypes, and Ahmed believes that the quality of the script determines which side a project will fall on. Take, for example, the 2016 HBO miniseries The Night Of, in which Ahmed plays a Pakistani-American student on trial for a murder he didn’t commit. The milestone of a South Asian Muslim leading a primetime cable series is as groundbreaking as it is irrelevant, because his character Naz is more than just that. He’s full of contradictions — astute in some ways, naïve in others, and irreparably mangled by the system. You don’t need to be a Pakistani Muslim to understand him.

Ahmed won an Emmy Award for The Night Of, making him the first Muslim actor in history to take home a lead acting trophy. He calls this triumph “bittersweet,” adding: “I’m aware that exceptions don’t change the rules. But I feel, to some extent, a responsibility to leave the door open and raise the conversation for others.”

Below, Ahmed discusses his career, the actors who made him love the movies, and how our very real global pandemic prepared him for Encounter’s fictional one.

We’ve already experienced a global contagion, but if a swarm of infectious parasites were to appear on Earth tomorrow, á la Encounter, how would you protect yourself?

Yeah, I guess we’ve had a bit of a dry run with COVID, haven’t we? I’d probably use some of that experience. But it’s difficult to say. Part of what this film asks of us, and part of what we’ve all learned from the pandemic, is that maybe there is a limit to how much you can protect yourself and your loved ones. You can do your best, but ultimately our fate isn’t fully in our hands. So it’s a difficult question to answer.

One of the things about Encounter that I found salient was that the film follows a South Asian family, but it doesn’t tokenize their experience. What sorts of things do you look for in a part or a script to make sure that you aren’t falling into that trap?

I don’t think there is a separate box that needs to be ticked regarding representation. I think if all the characters are written with nuance and humanity and empathy — all the characters, that is — then it’ll always fall on the right side, you know what I mean? I think sometimes when we talk about representation, we’re talking about it as an additional layer to be considered to make stories better in a different way. But it’s not. It’s an organic outgrowth of the same criteria that we use to assess whether stories are good. Do they extend humanity to everyone watching, and to those in the story? So I feel like it’s the same thing. The same things that make a good script are what make good representation.

I’m Persian, and because this is an issue that’s very personal to me, I’d like to ask you a few questions about being of South Asian and Muslim descent in an industry that typically ignores such actors. Did you ever feel pressured to take on certain roles that stereotype Muslim, South Asian, or Middle Eastern people because that was all that was being offered?

Yeah, certainly. I started acting in 2005, which was the very early days of the War on Terror and that ugly drumbeat of demonization and Islamophobia that was so dominant in our culture. So really, that was the only work available for me. But early on I made a decision to go into acting specifically to not do that, to not take on those stereotypical roles of terrorists or violent people, and to specifically do the opposite of that. So I had made a commitment to myself to do that. And I was very lucky that one of my first projects was Michael Winterbottom’s The Road to Guantánamo, and I got to meet the Tipton Three who were detained and tortured in Guantánamo Bay for three and a half years, and that was a very informative experience for me. I went to Pakistan, Afghanistan, and Iran — to Tehran and Zahedan — and going to the quote-unquote “Axis of Evil” firsthand and meeting the, again, quote-unquote “bad people” in Guantánamo, and really understanding the roles their stories play and complicating that narrative. That really stayed with me, and there was no going back after that. There wasn’t really a choice.

Were there any Pakistani or Muslim actors who you looked up to as a kid that gave you hope that you, too, could be successful as an actor?

Definitely, but there were also other actors too. Al Pacino and Robert De Niro excited me about the possibility of being an actor just as much as Amitabh Bachchan and Shah Rukh Khan. Same with Bruce Lee and Jackie Chan. Those were their stories at their best. Anyone can imagine themselves into them. Stories complicate our ideas of who we really are, and who we can relate to, and who they really are. There is a realization I had that there is no them — it’s just us. I was inspired by so many things growing up.

You’ve established a fellowship with Pillars Fund that provides grants to emerging Muslim artists and creatives. How do you envision this helping young Muslims in the arts?

By providing them with the mentorship and financial support they need to invest in themselves, and to take the time and space to develop as artists. The reality is that a lot of Muslims in the UK — more than 50% — live below the poverty line. When thinking about what the needs are of these underrepresented groups, one of them is just the unrestricted cash grant that we’re providing them. Sometimes it’s just as simple as that, like making sure they can pay their rent to take some of that heat off, so they can develop or find their voice as an artist, like the people who have inherited that privilege are able to do. So I hope it will support them in all kinds of ways, and of course the mentorship and the committee members we have, like Mahershala Ali and Hasan Minhaj, so many people … I’m blanking right now, but we just got like a “Muslim Avengers” that we’ve assembled.

Looking forward to the future, what sort of stories are you looking to tell that you haven’t yet?

I’d love to get back into doing comedy. I haven’t done that in a while. It’s been almost 12 years since I did Four Lions, which I loved doing. I think comedy is a fantastic vehicle to push buttons and tell challenging stories and to also just have fun.