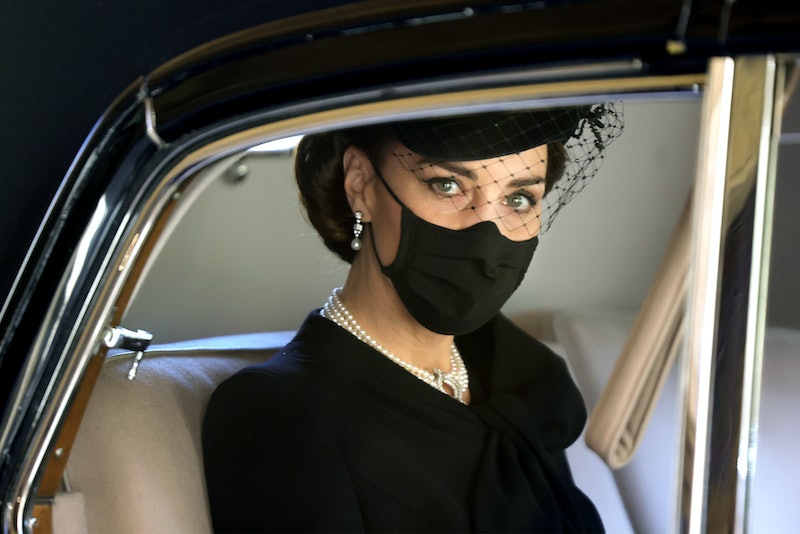 The British royal family is known for its stoicism, but members showed their love for Prince Philip during his funeral in many quiet ways. All throughout the somber event on Saturday, April 17, there were subtle tributes from his loved ones, ranging from the jewelry they wore to the flowers they brought. The personal touches made for an especially beautiful celebration of the 99-year-old Duke of Edinburgh, who died peacefully on April 9 at age 99.

The funeral was a scaled-back affair, but that suited the queen’s consort, who reportedly wanted a quieter event, opting for a ceremonial royal funeral instead of a state funeral. Not only was it planned with the duke’s “own personal wishes” in mind, per the royal family’s official announcement, but it also worked within the United Kingdom’s COVID-19 guidelines. The number of attendees was capped at 30, according to the BBC, and social distancing was observed inside St. George’s Chapel.

Royals who did attend — and at least one who didn’t — contributed in special ways. Eagle-eyed viewers may have spotted some of the personal touches throughout the event, which was broadcast on TV and streamed online.

Multiple royals provided wreaths, and the Duke and Duchess of Sussex were among them. While Meghan had to opt out of attending her grandfather-in-law’s funeral due to her second pregnancy, she and husband Prince Harry paid tribute to Prince Philip with a wreath. They made sure it was full of plants with special meaning, such as the national flower of the royal consort’s native Greece, acanthus mollis (bear’s breeches), and eryngium (sea holly) to represent the Royal Marines, per Toya Holness, the global press secretary of Archewell. Additionally, the wreath was accompanied by a card, handwritten by Meghan.

The Duchess of Sussex wasn’t the only one who wrote to the late Duke of Edinburgh. Some viewers noticed a card that appeared to read, “Your Loving Lilibet,” on Prince Philip’s coffin. That would indicate it was from Queen Elizabeth, as it used the nickname she was given in childhood. Metro reports that it was indeed from the monarch but suggests it said, “In Loving Memory.” Buckingham Palace would not comment on the note and told the newspaper it was “private.”

Over the course of their 73-year marriage, Queen Elizabeth is believed to have honored Prince Philip on multiple occasions with her brooch choices. His funeral may have been another one of those times. The queen wore the Richmond Brooch, a diamond brooch that was originally given to her grandmother Queen Mary for her wedding. It’s one the reigning monarch has worn many times in the past, often at events honoring people who have lived lives of service, much as her husband did.

Meanwhile, Camilla, the Duchess of Cornwall, similarly honored her father-in-law. Her brooch, however, was a bugle. The significance comes from the fact that she is colonel in chief of The Rifles, a role she took over from the Duke of Edinburgh in 2020, per Hello! magazine.

Kate, the Duchess of Cambridge, also appears to have chosen to pay tribute to the Duke of Edinburgh via her jewelry. At the funeral, she wore a four-strand pearl necklace with a diamond clasp and pearl earrings from the queen’s collection. The earrings, known as the Bahrain Pearl Earrings, were a wedding gift to Queen Elizabeth, per People. Additionally, Kate previously wore the necklace at a celebration of the queen and Prince Philip’s marriage — their 70th anniversary.

Prince Philip’s coffin wasn’t carried in any ordinary hearse; it was placed on a modified Land Rover. The royal family chose to use it as the royal consort himself had a hand in designing it.

The Music And Readings

The royal family also deferred to Prince Philip’s choices when it came to the hymns and readings included in the service. Among them was “Action Stations,” a naval call to battle.

Though Prince Philip’s loss is clearly a devastating one for the royal family, they came together and honored his life in a beautiful way.