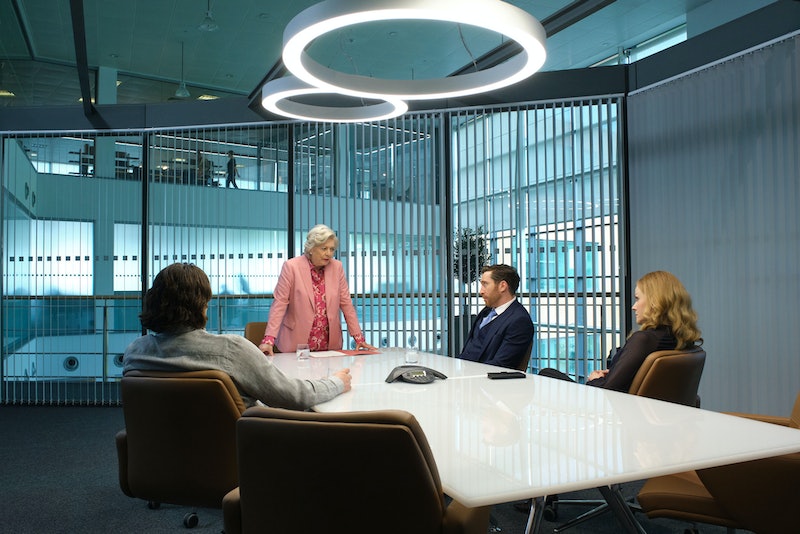 Featuring problematic characters with dodgy pasts, a shocking murder and suspicion, brand new BBC series Rules Of The Game is a thriller that has the complexities of sexual politics within the workplace at its heart. Penned by Ruth Fowler, the series is said to be inspired by the Harvey Weinstein scandal and Tarana Burke’s #MeToo movement and is set within the family-run company Fly Dynamic, a toxic office environment in the North West. Given the themes explored in the series, it’s worth asking if Fly Dynamic is based on a real company?

Well, not exactly. While Ruth Fowler has maintained that Fly Dynamic is a fictional company, she says the issues explored in the series are inspired by “many women’s experiences...” including her own.

Rules Of The Game star, Maxine Peake, also stressed that the series is “not just about this company, it’s about something that is systemic in all forms at workplaces and institutions”.

Peake added: “This show is so relevant and important now because we had this explosion with the #MeToo movement, but obviously like everything else we need to continue that.”

In the four-part series, which airs January 11, Fly Dynamic is a family-run sportswear company led by ruthless and hard-headed COO, Sam, played by Maxine Peake. When she arrives at work one day to find a dead body in her office reception, she is soon forced to confront the company’s dicey past – and its problematic present – when the new HR manager (Rakhee Thakrar) delves into company secrets and misconduct.

While a fictional story, the sad reality is there are many high profile cases of sexual misconduct in major corporations over the last few years. For example, back in 2018, more than 20,000 Google employees walked out of offices worldwide to protest multimillion-dollar payouts made to executives accused of sexual misconduct or harassment as they left the company, reported CNBC. The tech giant later agreed to overhaul its sexual harassment policies as part of an extensive legal settlement. More recently, in 2020, McDonald's, Pinterest, Fox News, and Warner Bros all faced gender discrimination and/or sexual harassment suits.

With that said, it’s clear why Fowler said, per BBC, that she was “more than ready” to write a drama loosely based on #MeToo in a fictional British workplace, after the years of “tangled messages of consent and blame” that she’d grown up with as a teenager in the late 90s.

Peake also explained that Rules Of The Game shows these issues are “happening in every workforce and to people who have no way of speaking out”.

The actor added: “I think it’s important we keep telling these stories and keep the momentum. Things are changing, but not fast enough. There are still issues to be tackled, and it’s not going away anytime soon. I know we’re not changing the world, but we’re making sure that these issues don’t go away, we have something that is a drama but has a strong political vein running through it.”

More like this
ITV's 'Maternal' Was Inspired By A Very Simple – & Unanswerable – Question
By Maxine Harrison
The Banned 'Friends' Ad Shows Monica As You’ve Never Seen Her Before
By Sam Ramsden
Con O'Neill Was Connected With Sarah Lancashire Long Before 'Happy Valley'
By El Hunt
'Bridgerton' S3 Will Show A *Very* Different Side To Kanthony
By Sam Ramsden
Get The Very Best Of Bustle/UK
Sign up for Bustle UK's twice-weekly newsletter, featuring the latest must-watch TV, moving personal stories, and expert advice on the hottest viral buys.