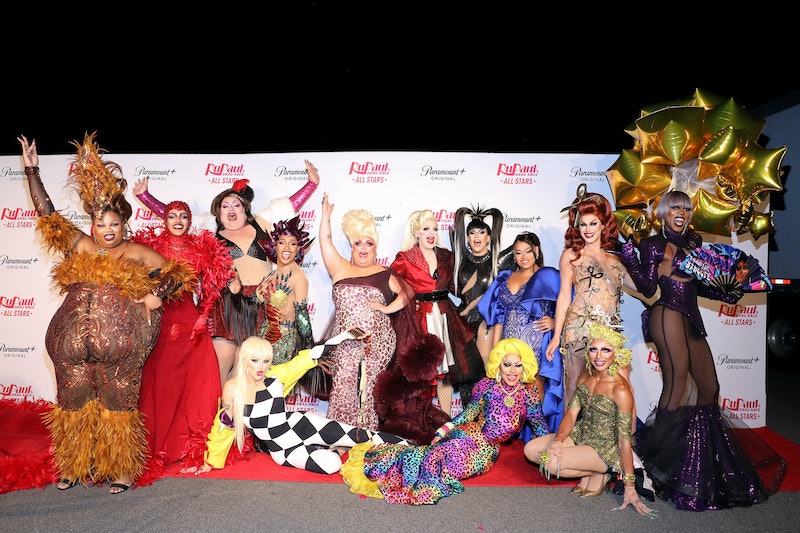 For 13 regular seasons and five All Stars seasons, RuPaul’s Drag Race has aired weekly on cable television networks Logo or VH1, allowing fans everywhere to watch every episode simultaneously whether at viewing parties inside LGBTQ+ bars, at home with friends, or online with fellow fans on social media. But for the sixth iteration of All Stars in 2021, production company World of Wonder moved the series to streaming service Paramount+ in the United States, where episodes have been debuting at 3 a.m. ET every week since June 24 and will continue to do so all summer at the same early hour. Viewers weren’t too pleased with the decision to move All Stars to Paramount+ for a variety of reason, considering that the collective live viewing experience has aided the show’s viral nature and built a dedicated fanbase that has consistently broken ratings records.

“I don’t think it’s fair to us,” All Star Trinity K. Bonet, who first competed on Season 6 of Drag Race in 2014, tells Bustle at Voss Events’ recent Drive ‘N’ Drag Saves 2021 tour stop in New York City. She adds that “it’s a tradition” for queens and fans alike to see the show at viewing parties. “People spoil everything, so even for myself, they were posting and tagging me, and I was like, ‘I want to watch it at the watch party. I don’t want to see what I said.’ It’s weird. I don’t think it was a good idea, but oh well. It is what it is.”

“Some b*tches are like, ‘Ugh, another streaming service.’ It’s 15 dollars ... four episodes each month for three months, five dollars a month. B*tch, spend the 15 dollars, ’cause you gonna spend it on Uber Eats.”

So what exactly are the fans’ complaints? First, regular seasons of RuPaul’s Drag Race are still set to air on VH1. This means fans must now subscribe to Paramount+, which costs $5 to $10 per month, to watch All Stars 6, as well as subscribe to a live TV service with access to VH1 or WOW Presents Plus to watch Drag Race. Second, as Bonet mentioned, many fans venture out to weekly Drag Race viewing parties hosted by LGBTQ+ bars, many of which recently reopened from COVID-related closures. Now that episodes are released at 3 a.m. ET rather than broadcast at 8 p.m. like Season 13, there’s arguably less of an incentive for fans to attend a bar viewing party, where they’d likely spend money on drinks, food, and sometimes entrance tickets to support their local bars.

It’s up to the bars to “get their sh*t together,” Season 5 alum and All Stars competitor Serena ChaCha says, in order to adapt to the new release format. “As business people, they’re going to work around that. Streaming television has been talked about as the future of television for a while,” she explains. “A lot of people didn't have [access to Logo or VH1 or] the means to go to a watch party, so now they have the capability of watching us on their phones.”

Ginger Minj, who appeared on Season 7 and All Stars 2, admits that she was “a little bit worried” about the switch. “I’ve known over the last eight years, ‘OK, I’m gonna have a steady income by hosting [viewing] parties,’ and I was afraid that it wasn’t going to continue to happen,” she says. However, Minj claims that viewing parties were actually “bigger than ever” for the premiere episodes. “It’s like the Super Bowl. You can sit back and watch it in your house, but that’s no fun! You want to go and participate with all your friends — and scream at the people you don’t like.”

Kylie Sonique Love, who previously competed on Season 2, doesn’t see it as that big of a change. “I think people that are truly fans of the show will adapt, [and] five dollars is not a lot to ask for,” she says, noting that many drag performers’ live shows and meet and greets cost “a lot more” than the price of a Paramount+ subscription.

Fellow Season 2 alum Pandora Boxx considers it a positive change, especially since she doesn’t have a cable subscription. “I thought it was worthless to pay for cable that I wasn’t watching, and so it was really hard for me to actually watch Drag Race. So I’m kind of excited,” she says. “Even though it drops at a different time, you can still do viewing parties because people are still going to come, and I think a streaming service opens it up to so many more people that don’t have cable that can actually watch it [now].”

“B*tch, get your ass to the local bar, mingle, greet, [and] drink with the local drag queens and the Drag Race girls they’re booking, because regardless of if you see it at 3 a.m. or 8 p.m., it’s more about being social.”

While previous Season 11 competitor Scarlet Envy recognizes that “nothing is ever perfect,” she sees the switch to streaming as “a new era” of All Stars. “I also drop at 3 a.m. generally, so that’s very relatable for me,” she says. “We’re streaming now. This is how we watch things, you know? Down with cable TV. I think it’s something to be embraced.” As far as the move’s effect on viewing parties, Envy believes the change could help performers prepare before stepping into a hosting position, as it’s “hard to pay attention” while entertaining an audience. “I can watch the episode first and do my field research, and figure out what I’m gonna do [at the parties],” she continues. “We’re watching the crowd and moderating the commercial breaks ... So I think it’s nice.”

READ NEXT: All Stars 6 Queens Describe The Season In One Word

Silky Nutmeg Ganache, who also competed on Season 11, agrees with Envy’s sentiment and tells us that she’s “fully booked for viewing parties” and hopes people attend them to support the bars that have struggled through the pandemic. “B*tch, get your ass to the local bar, mingle, greet, [and] drink with the local drag queens and the Drag Race girls they’re booking, because regardless of if you see it at 3 a.m. or 8 p.m., it’s more about being social,” she says. “So take a step back, and don’t become selfish about what time. Just don’t watch it.”

Ganache continues, encouraging fans to sign up for Paramount+. “Some b*tches are like, ‘Ugh, another streaming service.’ It’s 15 dollars,” she says before generously laying out the math for undecided viewers. “Twelve episodes, four episodes each month for three months, five dollars a month. B*tch, spend the 15 dollars, ’cause you gonna spend it on Uber Eats. I like Chipotle, and my order is 15 dollars, so I’m gonna be open and honest about that. Do what you got to do, and go to the bars and support, b*tch.”

Below, check out more fan reactions about All Stars’ move to Paramount+:

READ NEXT: All Stars 6 Queens Reveal The Frontrunner