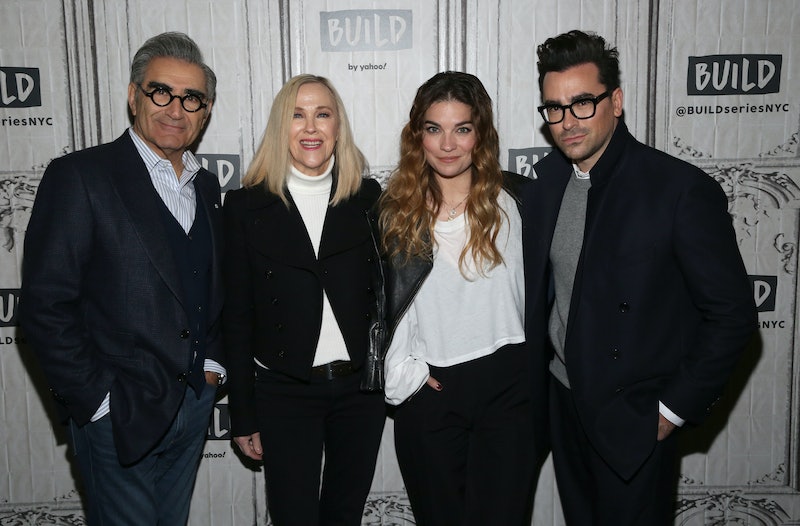 If you laughed and happy-sobbed your way through the cozy world of Schitt's Creek over quarantine, you're not alone. During a special Schitt's Creek reunion and Q&A, moderator/mega fan Sir Patrick Stewart revealed that as he watched the emotional finale episode, he "laughed out loud ... almost continuously throughout that episode, except when I was crying." Throughout the Q&A, the core cast of Dan Levy, Eugene Levy, Annie Murphy, and Catherine O'Hara also recalled their favorite moments from filming. Understandably, joyful tears started flowing as they reminisced on their hit show.

As the real-life dad of Schitt's Creek co-creator Dan Levy, Eugene said his favorite memories of filming were all those family moments in the motel. He also spoke about that historic night at the Emmy's and one small issue he had with all those wins: They only received three of their collective nine trophies at their Toronto celebration party, so they never got a picture with an arm full of awards. Dan responded, "Yeah, well. Dad, thanks, but that is a parent talking. We had a very good time, and we're just grateful to be here."

When it came time for Annie to reflect on her favorite moment, she felt "verklempt" as she spoke about how lovely the cast was. Tearing up, Annie shared, "So many moments over those six years will stay with me forever, but I think our last day of shooting will be kind of, something that flashes before my eyes as I'm dying," she said. Continuing her thought, Annie added that she realized she was "saying goodbye to very good friends and just being surrounded by this crew and wonderful cast of characters that I've grown to love so deeply over the years."

And for Dan, the fun, supportive environment they all worked in will be his new gold standard. He said, "It will inform, and it has informed, the standards with which I know that I will be working from here on out." Dan's next project is a highly-anticipated hosting slot on the Feb. 6 episode of Saturday Night Live, so here's hoping that set is just as great.