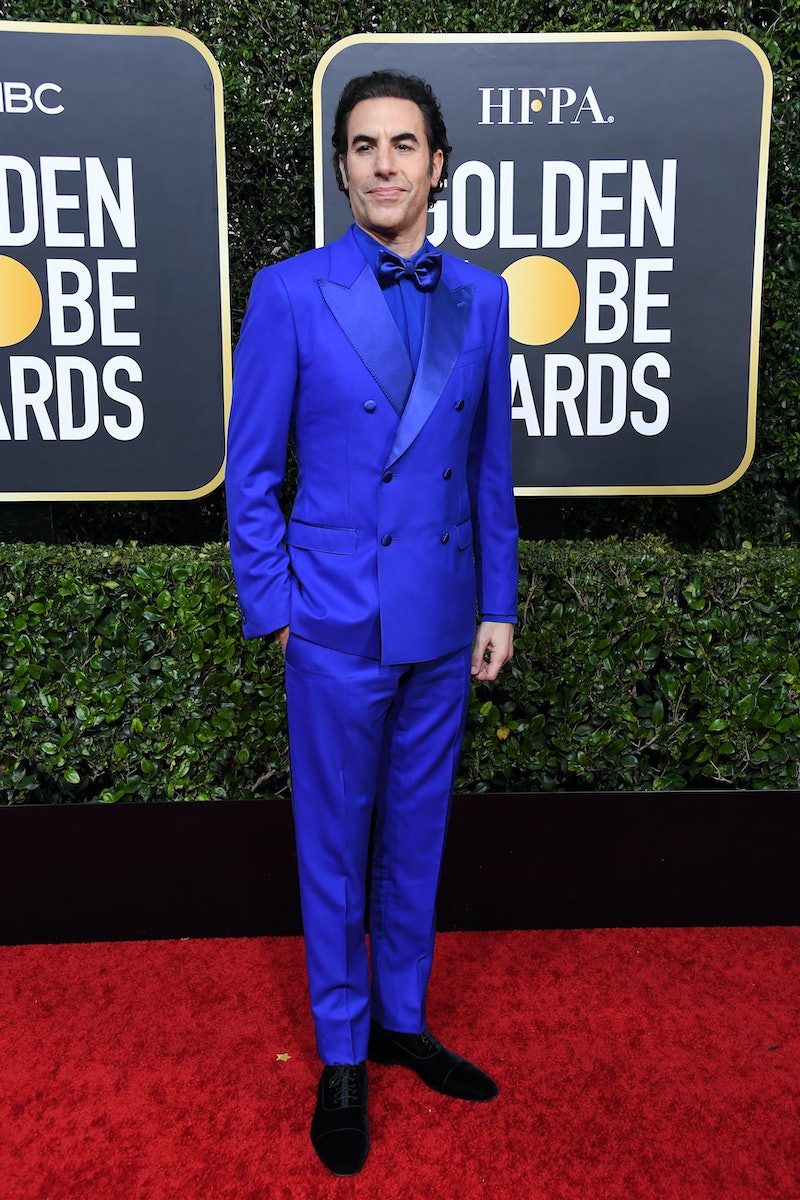 The attacks have gotten personal. Borat 2 star and co-writer Sacha Baron Cohen wrote a scathing response to Donald Trump via Twitter on Saturday, Oct. 24, a day after the U.S. president told journalists he was “phony” and a “creep.” Baron Cohen’s tweet pulled no punches whatsoever. Not only did he tell Trump “the whole world laughs at you,” he suggested POTUS would make an excellent “racist buffoon” in a future project.

Tension between Baron Cohen and the Trump White House arose in the lead-up to the Oct. 23 release of Borat 2, which is officially called Borat Subsequent Moviefilm: Delivery of Prodigious Bribe to American Regime for Make Benefit Once Glorious Nation of Kazakhstan. The mockumentary comedy paints the Trump administration in an unfavorable light, thanks in part to certain members’ unwitting participation. Most notably, Trump’s personal lawyer Rudy Giuliani became the subject of controversy after footage came out showing him in a hotel room with the title character’s daughter (played by Maria Bakalova), who was posing as a reporter. (Giuliani has insisted that “at no point was [he] inappropriate,” though many viewers disagree.) The scene prompted reporters to ask Trump about Borat 2, leading to his pointed criticism of its star and, in turn, Baron Cohen’s clapback.

“Donald—I appreciate the free publicity for Borat!” Baron Cohen tweeted in part. “I admit, I don’t find you funny either. But yet the whole world laughs at you.”

The actor-writer didn’t stop there. He added that he is “always looking for people to play racist buffoons,” and that they should talk because Trump will “need a job after Jan. 20.”

While Trump himself escaped an inadvertent Borat 2 role, the same can’t be said for his vice president, Mike Pence. After being mentioned numerous times in the film, the VP eventually comes face to face (sort of) with the titular Kazakh journalist. Even so, Trump hasn’t been able to avoid Baron Cohen altogether. As he told reporters on Friday, he and Cohen met “years ago.” The incident he described sounded like a 2003 interview in which Trump sat down with another Baron Cohen character, the faux interviewer and rapper Ali G, for a brief and bizarre exchange.

“That’s a phony guy. And I don’t find him funny,” Trump said on Friday, per Deadline. “I don’t know anything about him other than he tried to scam me.”

Based on what we’ve seen so far, any talking he and Baron Cohen do in the future is likely to be more cutting than collaborative in nature.