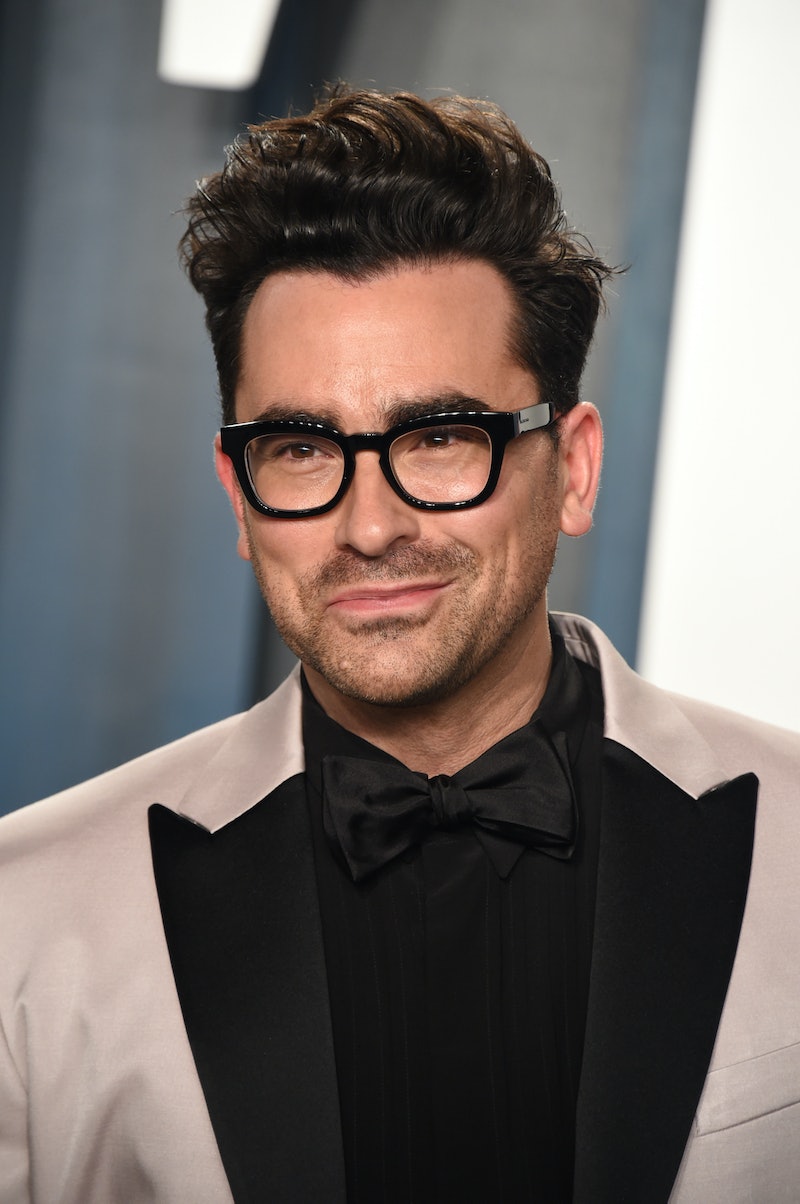 Dan Levy's TV reign will likely continue at the 2020 People's Choice Awards: The Schitt's Creek creator and actor picked up various nominations across several categories, including Comedy TV Star of 2020 and Male TV Star of 2020. But while his work on Schitt's Creek has garnered the most accolades and cemented his icon status in the pop culture zeitgeist, Levy's illustrious career timeline proves that he's certainly no stranger to the biz.

Before his role as the sardonic but beloved David Rose, Levy had a career that spanned consulting, hosting, being a music video extra, and more. It all eventually led to his CBC sitcom Schitt’s Creek, which he co-created (and co-starred in) with his real-life father, Eugene Levy. Post-Schitt’s Creek, Levy remains booked; he's set to star alongside Kristen Stewart in a festive rom-com called Happiest Season. As the actor continues to shine in his career, here's a look back at his major projects thus far.

"Behind These Hazel Eyes"

Let's go way, way back to the very beginning of Levy's career in 2005 when he appeared in Kelly Clarkson's moody video for "Behind These Hazel Eyes." In a blink-and-you'll-miss-it appearance, Levy plays a wedding guest and is stunned when Clarkson throws her bouquet at her fiancé's mistress and destroys the floral arrangements, effectively calling off the wedding with a flourish. Fast forward to 2:56 to see Levy as a star on the rise.

During his stint at MTV Canada, in which he worked as a video jockey and host of The Hills aftershow, Levy tried his best to prove that he isn't just another celebrity kid profiting off of his famous father. In an April interview with Variety, Levy said, "It was amazing for me, just in terms of the freedoms it afforded me, and the confidence I was given. Not just as a host, but as someone who was trying to make a name for myself outside of my dad."

Eventually, Levy realized that MTV was no longer the right fit for him and the work was causing him anxiety, so he decided to move on. Around that time, he began working on projects that offered a bigger sense of fulfillment, and that's when Schitt's Creek came to be. "I had come out of MTV, I had made a name for myself, as small as it was, up in Canada," he explained. "But that, in a way, made me feel OK with going to my dad for this idea. So I went to him with this idea of a wealthy family losing their money and said, 'Do you want to work on this with me?' And he said, 'Yes.'"

While in the early stages of working on Schitt's Creek, Levy continued to work multiple gigs in Hollywood. Most notably, he was featured as Robbie in Degrassi Goes Hollywood and multiple episodes of teen drama Degrassi: The Next Generation. In Lifetime's Cyberstalker, Levy played a deceptive detective's assistant who stalked Mischa Barton's character and killed her parents. For the horror musical Stage Fright, Levy played an entertainment reporter, and for his guest role in Modern Family, he starred as a courtroom sketch artist seeking revenge. It's clear from his résumé that Levy has range.

Of course, this is the role he's most loved for, but as hilarious as the Emmy-winning show is, Levy considers it a drama. "It is a drama that happens to involve very funny circumstances, and characters that are not equipped to handle those circumstances," he told Variety. Now that the series has wrapped, Levy said he wants "to keep telling stories that mean something to me, and that are potentially joyful." He recently signed a deal with ABC Studios and believes it's a positive next step. He also thinks it's a partnership that will help him continue to release even more creative and emotionally satisfying work in the future.

Bad News: Unfortunately, Levy's hosting gig on The Great Canadian Baking Show only lasted from 2017 to 2018 because of scheduling conflicts. Good News: Fans were able to witness Levy's expertise at eating baked goods and now have a slew of delightful clips and GIFs from the show to replay on a loop.

Christmas came early in 2019 when The Kacey Musgraves Christmas Show premiered on Amazon in November. Throughout the program, which included appearances by Kendall Jenner, Troye Sivan, and Zooey Deschanel, Levy served as the narrator and landed a few lighthearted jabs at the production.

Premiering on Nov. 25, Happiest Season is described as capturing "the range of emotions tied to wanting your family's acceptance, being true to yourself, and trying not to ruin Christmas." In it, Levy plays John, Abby's (Kristen Stewart) best friend who saves the day after she has to hide her relationship because her girlfriend hasn't come out to her family. It Levy's first major post-Schitt's role, and it's clear he has a long career ahead of him.

More like this
Here’s Everything Coming To & Leaving Netflix In October
By Jake Viswanath
What’s New On Netflix: Ana De Armas’ 'Blonde' & A Nick Kroll Special
By Arya Roshanian
Everything To Know About The Long-Awaited ‘Community’ Movie
By Stephanie Topacio Long
Paul Mescal, Man Of Mystery
By Samantha Leach and Heather Hazzan
Get Even More From Bustle — Sign Up For The Newsletter