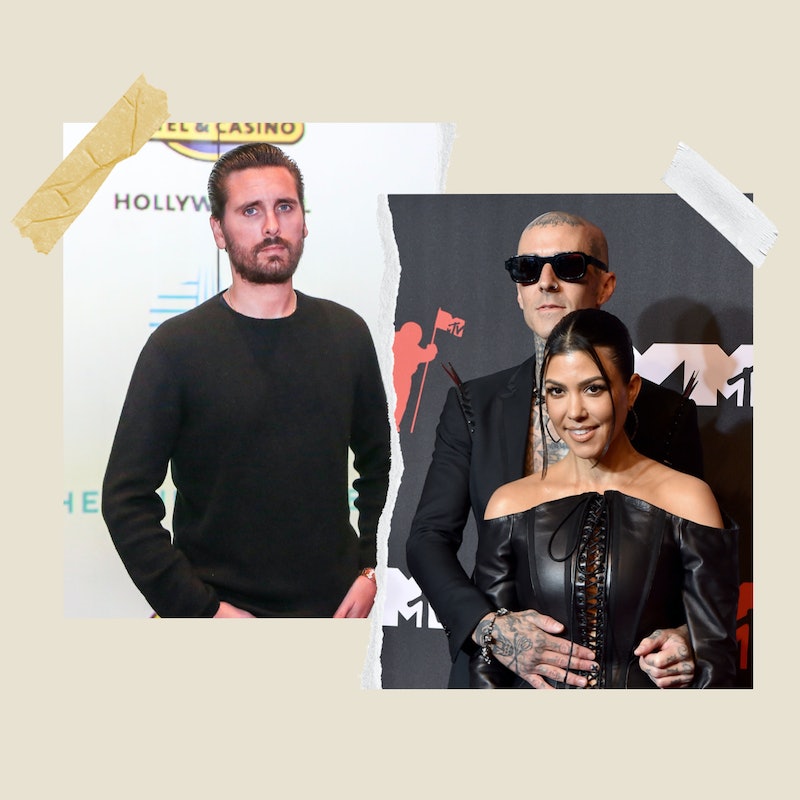 Kourtney Kardashian and Travis Barker are officially one step closer to spending the rest of their lives together. After showing off their steamy romance for months on Instagram, the Poosh founder revealed on Sunday, Oct. 17, that the Blink-182 drummer asked for her hand in marriage. “Forever,” she wrote alongside two photos from the romantic proposal, which took place on the beach at sunset in the middle of a heart made out of red roses. And while the couple’s family and friends are thrilled by the news, fans are already tweeting about the reality star’s ex, Scott Disick, who may not be taking it so well.

“Is someone checking in on Scott Disick at this time??” one fan tweeted upon finding out about Kardashian and Barker’s engagement. Several other fans also weighed in after the proposal, many pointing to the fact that the 42-year-old KUWTK star quickly accepted a proposal from the musician after repeatedly rejecting offers from Disick, with whom she shares three children. “I always thought Kourtney Kardashian was anti marriage,” Twitter user @myleezakardash wrote. “Whole time she was just anti marrying Scott Disick. Yikes!”

While some people expressed genuine concern for Disick, others took a different approach by creating memes about the awkward situation instead.

Despite the memes, many fans were hoping that Kardashian would choose to be with Disick in the end. “My toxic trait is wanting Kourtney Kardashian and Scott Disick to be together,” Twitter user @Haleyyyyyc wrote. Another fan echoed that sentiment, writing that they were “rooting for Scott Disick,” but after a decade of waiting for him to change, it was time for Kourtney to move on. “Finally Kourtney is happy and living her life,” they added.

The 38-year-old Talentless founder has been very vocal about wanting to rekindle his romance with Kourtney, who he met in 2006 and dated until 2015. “Wherever Kourt stands, I stand with her,” he said on the final season of Keeping Up With the Kardashians. “I love you, and I’m ready to marry you right here, right now.” At the time, Kourtney wasn’t ready to rule out a future with Scott, but during the reunion special in June, she revealed why their relationship never worked out. “I think the substance abuse was the dealbreaker,” she said.

Scott, for his part, admitted that he made many mistakes throughout their relationship. “I was pretty irresponsible,” he confessed. And although he has since made it clear that he doesn’t support Kourtney and Travis’ relationship, he gave them his blessing anyway. “I think if you really love somebody, you want them to be happy no matter what,” he told host Andy Cohen. “So I do give her a blessing to be happy.”