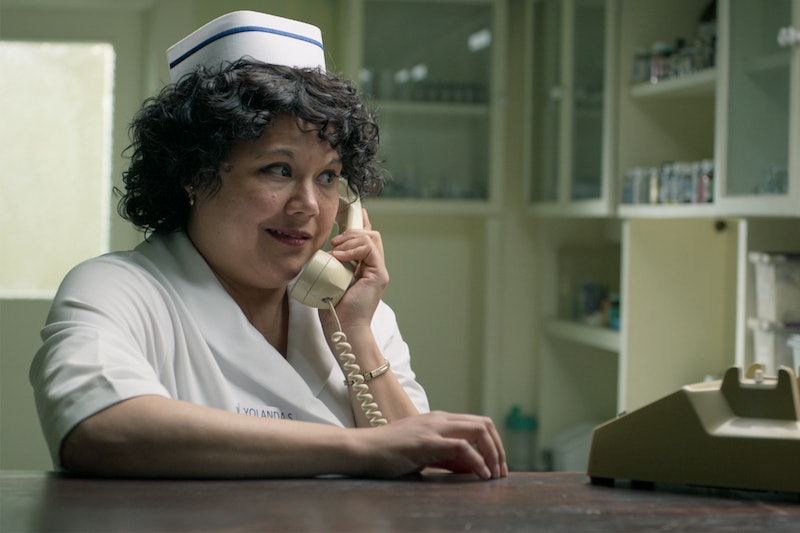 Selena: The Series may have only showed a brief glimpse of Yolanda Saldivar in the first part, but the actor who plays her has already begun reminding fans not to get the two confused. Natasha Perez shared that she's worried for her safety during an interview with Entertainment Weekly, noting that the late Tejano singer still has an incredibly fervent fan base that might not separate her from her character. Saldivar — Selena's one-time business associate and president of her fan club — shot and killed the singer in Corpus Christi, Texas, in 1995.

While Perez said she thought it would be "fascinating" to play Saldivar onscreen, she also admitted that taking on the role of such a controversial figure made her concerned for her well-being. "I remember working with the director on the scene, and she asked me how I was feeling," the actor told EW. "I told her I was feeling conflicted. The actress in me is fascinated by the journey of a complex character, but the human in me has all sorts of feelings. The actress in me is also worried for her safety."

Perez noted that "a lot of people take this very seriously and think that it's real," and then made sure to emphasize the separation between herself and her character. "In this case, the character is real, but it's not me," she said. "I'm not her."

There does seem to be a saving grace for the actor: the difference between her onscreen look and her real-life appearance. Perez told EW that several of her co-stars actually didn't recognize her on set early on in filming. "It took them a few weeks to get used to the fact that I was the one they were seeing around set," she said. "I'm hoping that will happen in the real world too and that I'm not that recognizable out of my costume."

The real Saldivar was known as Selena's "number one fan" and founded the singer's official fan club in 1991, according to Texas Monthly. She eventually became close friends with Selena and even worked her way up to running her clothing boutiques for her, despite the fact that her appreciation for the singer often reached "obsessive" levels. A former roommate told the outlet that Saldivar's apartment was "like a shrine" to Selena.

In 1995, weeks before the murder, Saldivar was fired from her job for allegedly stealing money from the boutiques, per the New York Times. Selena's father, Abraham Quintanilla Jr., told reporters that the singer had gone to meet with Saldivar in order to retrieve some financial records when things took a deadly turn. (Saldivar claimed the shooting was accidental, but prosecutors pointed out that the former nurse didn't call 911 or attempt to stop Selena's bleeding.)

In October 1995, Saldivar was convicted of murder and sentenced to life in prison. At the time, Texas law stated that prisoners sentenced to life would have to serve 30 years before being eligible for parole; Saldivar will officially be up for parole on March 30, 2025, which would make her 65 years old. In 2018, Abraham told Primer Impacto that the Quintanilla family is not opposed to Saldivar receiving parole at that time. "We do not care if they release her today," he said. "Nothing is going to give us back my daughter."

While Selena's tragic death still looms large in the minds of the singer's fans, Perez made it clear to EW that the Netflix series isn't about her murder, but is instead a celebration of her life. "The series isn't about her death," she said about the upcoming Part 2, which will introduce Saldivar properly. "Yolanda is there to add tension to what's going on, but what's going on is so beautiful because it's an artist finding herself, an artist emerging and finding her place within her family and society."

More like this
Netflix Reveals First Look At Wednesday In The 'Addams Family' Spinoff Series
By Bustle Editors
A New 'And Just Like That' Table Read Pic Confirms A Key Character's Return
By Jack Irvin and Grace Wehniainen
Nicola Coughlan Shared A Lady Whistledown Excerpt From ‘Bridgerton’ Season 3
By Grace Wehniainen, Alyssa Lapid and Sam Ramsden
Watch The Thrilling Teaser Trailer Of 'Shadow And Bone' Season 2
By Gretchen Smail and Jack Irvin
Get Even More From Bustle — Sign Up For The Newsletter