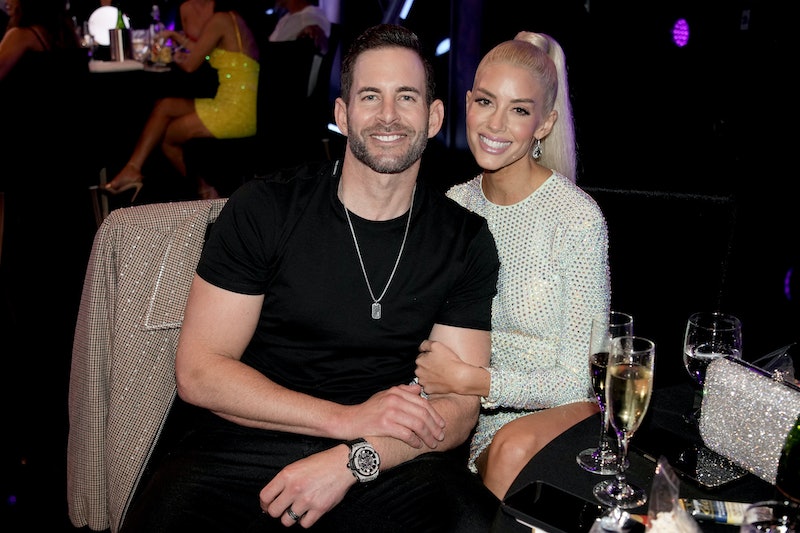 When the second season of Selling Sunset began filming, Heather Rae Young and Tarek El Moussa had just started dating. Fans learned a bit about the early stages of their relationship — including that Heather met Tarek's kids pretty early on, and then an engagement a couple years into dating. Since then, the couple has blazed past many more relationship milestones, including expanding their family. On July 13, Heather and Tarek announced that they are expecting their first baby together, due in early 2023.

Read on to find out how it all started with the reality stars, from their budding romance to their baby on the way.

After finalizing his divorce from Flip or Flop costar Christina Anstead in January 2018, Tarek met Heather after spotting her on a yacht near his. Photos of the two cuddling and kissing at Redondo Beach, California's Portofino Hotel & Marina surfaced in late July 2019.

On August 8, Tarek called Heather his girlfriend on Instagram.

"After more than 3 years on my own I’m so PROUD to say that this beautiful, sweet and talented young lady is my girlfriend!" he captioned their photo, in part. "The first time I saw her smile she 'did that thing to my tummy,' and I knew right away I needed to get to know her . . . I just want to let the world know I met someone special that makes me want to be a better man."

The same month, Heather and Tarek gave a joint interview to People in which they revealed that they love to do "normal people things" like going out to dinner and watching movies. "He's been very romantic. It's been very amazing," Heather said. When celebrating Tarek's 38th birthday on Aug. 21, they even met each other's dads.

September 2019: Heather Gets The Best Gift

When Heather turned 32 the following month, Tarek surprised her with her dream car: a white hard-top Ferrari. She shared a "gushy post" on Instagram to show off her new wheels, calling Tarek a "special man" and encouraging her followers to not "settle for anything less" than true love.

Following a European vacation to Amsterdam and Paris, Tarek included Heather in his holiday family photo with his kids Taylor, 9, and Brayden, 4 — all in matching pajamas. "I just love you and our little family so much," he wrote along with the Dec. 6 Instagram shot, thanking Heather "for coming into our life and making this photo possible." She's also gone to Taylor and Brayden's sporting events, watched their school performances, and attended their birthday parties over the past year. They all celebrated Easter 2020 together, too.

In January 2020, Tarek revealed on Instagram that he and Heather have been "living together for a while now," splitting their time between his Orange County home and her place in West Hollywood "one or two nights a week." Then in April 2020, Tarek sold his house, and the pair began renting a beachfront home in Newport Beach while they wait to "build or find the perfect house," he told People.

While celebrating their one-year anniversary with a boat trip to Catalina Island, California on July 25, Tarek proposed to Heather with an eight-carat emerald-cut diamond ring. "I think being engaged is so special because he chose me and I love him so much," Heather told People, adding that the beach proposal was the best day of her life. "I love him more than anything and he's my best friend in the whole world, I cannot stop smiling.”

Their wedding planning kicked off in October 2020 when Heather announced that they’d locked in a wedding date and location, and she’d chosen her “dream dress” from her favorite wedding dress designer, Galia Lahav. “We don't want to have a super big wedding, but our small wedding is probably gonna be someone else's big wedding, so we'll see how things go,” Tarek told People in November. “But we're planning on doing it far enough out to where hopefully the pandemic settles down a little."

Tarek and Heather hosted an intimate engagement party on April 24, 2021 in Newport Beach with Heather’s Selling Sunset co-stars Chrishell Stause, Amanza Smith, Mary Fitzgerald, Romain Bonnet, Davina Potratz, and Jason and Brett Oppenheim all in attendance. "The most special night with the most special man... I can't stop smiling," Heather captioned an Instagram party video, which was set to the tune of Justin Bieber's “Holy."

The couple officially tied the knot on October 23, 2021 in Miramar Beach, Montecito, California. Their nuptials were broadcast in December on HGTV and Discovery+ in a special titled Tarek & Heather The Big I Do. Heather’s vows focused on family, thanking Tarek for trusting her to help him raise his kids Taylor and Brayden. The wedding was a star-studded affair similar to their engagement party, with Emma Hernan commenting on the newlyweds: “She’s the jelly to his peanut butter.”

July 2022: Expecting Their First Child Together

Heather and Tarek originally stated that they did not want any more children, but after a choreographed routine by Taylor and two of El Moussa’s nieces at the reception, Heather seemed to change her tune.

“We might make a baby,” she said at the end of their wedding special. “You never know. I don’t know. Honestly, I love Taylor and Brayden so much, so why not?” The couple soon began in vitro fertilization treatments and were scheduled to undergo an embryo transfer in fall when they found out she was pregnant. “I'm just obsessed with my kids. They're my everything, so having another one is just icing on the cake. I'm so excited,” Tarek told People. Heather is due early 2023.

More like this
Love Is Blind’s Natalie Claims Shayne Signed Up For 'Perfect Match' While They Were “Still Together”
By Brad Witter
Yes, That's Christina From 'The Bachelor' In Taylor Swift's "Fifteen" Music Video
By Brad Witter
All The Clues About Aly & Zach’s Relationship Status After 'The Bachelor'
By Brad Witter
Gemma Atkinson & Gorka Márquez Are Strictly The Sweetest Couple
By El Hunt
Get Even More From Bustle — Sign Up For The Newsletter
From hair trends to relationship advice, our daily newsletter has everything you need to sound like a person who’s on TikTok, even if you aren’t.

This article was originally published on May 22, 2020