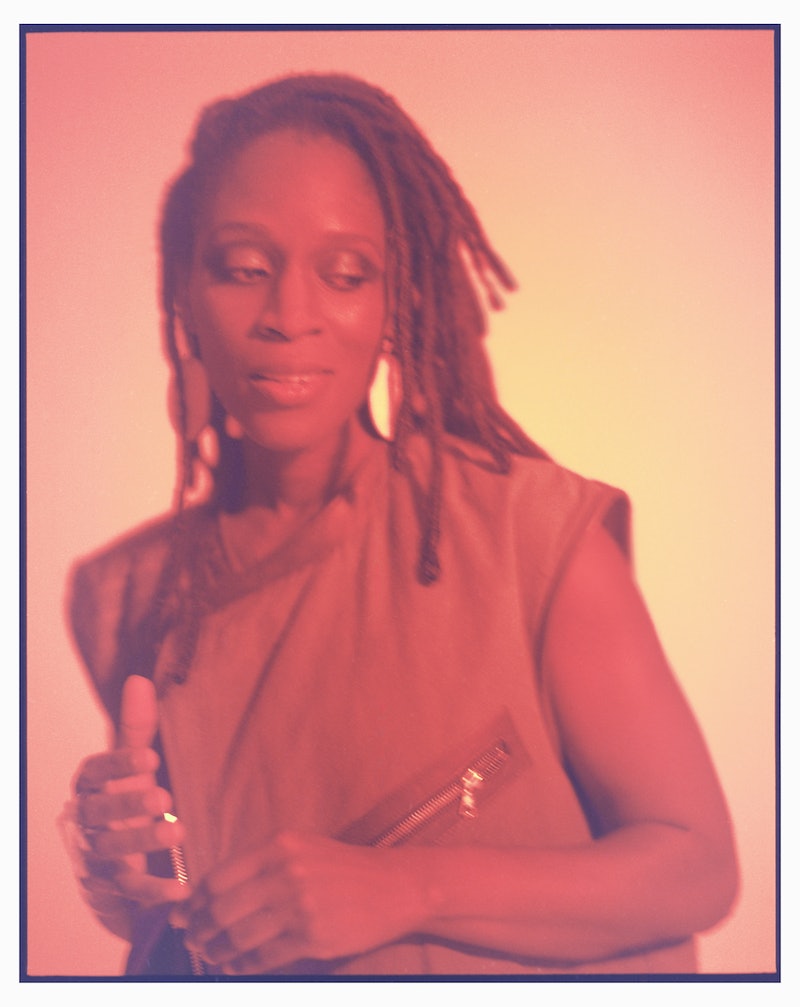 “You have to forgive me, I’m nursing a hangover and my brain is like marshmallow right now,” Sharon Duncan-Brewster says, midway through our Zoom conversation. It seems she partied a little too hard the previous night, celebrating the London premiere of Denis Villeneuve’s Dune, and who could blame her?

Being back in the UK was something of a homecoming for the 45-year-old actor, who prior to Dune was primarily known for her work in British TV. Duncan-Brewster grew up in London’s Hackney neighborhood, and the opportunity to bring Dune to her hometown was a way of coming full circle — of bringing the role that changed her to the place that raised her.

Duncan-Brewster’s character — a gender-swapped version of Dr. Liet-Kynes, the imperial planetologist from Frank Herbert’s novel — is a many-sided one. She’s ostensibly an ecologist, devoted to studying her native planet Arrakis, but she’s long acted as more than just a scientist. When the emperor orders her to oversee the planet’s transition as it’s handed from one royal house to another, she must appear to be impartial, even as she places her hand on the scale — both for the emperor, and for her own hidden agenda. “She’s a person in power who doesn’t actually hold that much power on paper, but is keeping a lot of things together on the sidelines,” Duncan-Brewster says. To prepare for the part, she studied duplicitous elected officials. “I looked around [at] UK politicians, and dipped into the ones that don’t necessarily tell the truth all the time.”

Yet even if Liet-Kynes’ motives aren’t always easy to identify, she’s unwavering in her ultimate goal: protecting her fellow Fremen, the indigenous people of Arrakis. Inhabiting the leader’s persona lent Duncan-Brewster a new perspective on how to navigate conflict. “I’m a different human being because of it. There is a certain calm I’ve acquired somehow by playing her,” she says. “I realized how things in our world can be fixed if we just open our ears. [The repair] can’t come from a place of panic. It only comes from listening to one another and putting peace into practice.”

Much has been made of Dune’s prescience, of all the conflict and ecological wreckage it seems to have foretold. But like Liet-Kynes, Duncan-Brewster has hope for her world. “If we take the energy we put into arms and weapons, and invest that into saving ourselves and our environment, I think we’d be alright,” she says.

Below, Duncan-Brewster discusses playing a gender-swapped character, the timeliness of Dune, and working with Timothée Chalamet.

Were you a fan of Dune before you signed on to the movie?

Not at all, actually. The other day, I was thinking about my earliest connection to it. As a young person, I remember seeing posters for the [1984 David Lynch adaptation] in train stations and outside cinemas, but I wasn’t old enough to see it. I also remember seeing lots of photographs of Sting. And then I realized that I had a boyfriend back in the ‘90s who was actually in the TV miniseries adaptation. That was probably my first proper connection with it, but that’s about it. So when I got the phone call asking to self-tape for my role, I had to learn all about the universe online.

Do you feel like you have anything in common with your character?

You know, I would say yes, but I think that’s because most of us do. We all play different roles [like Liet-Kynes does], don’t we? We have our outdoor behavior, our work mode, and the way we carry ourselves with our friends, which are all different from how we behave with our family. And sometimes these different personalities never meet. We don’t realize how much we shape-shift and change around different people. And I don’t necessarily think that’s a bad thing. I think we all have to survive in a world that moves and changes so rapidly. We’re bombarded with so many different aspects of living.

Your character is gender-swapped in the movie. Did that change anything about your approach to the role?

I’ve always said that if you’re a woman playing the role of a man, you’re still just playing a character. It’s not much different. I mean, there are differences, but as performers, we all fine-tune and hone in on what makes those differences important in our portrayal, if they need to be there. Sometimes they do, and sometimes they don’t. It depends on the story. And in the case of Dune and Dr. Liet-Kynes, it’s okay to just play the person as a person.

Did you have to deal with any fans who were upset that Liet-Kynes was gender-swapped?

I’ve gotten so many DMs on Twitter and Instagram from fans about the movie. They’re very protective of Frank Herbert’s work, and I totally respect that … but as a performer, there is danger to delving into places where one should not go. And there is temptation there. So I did peek onto a few chat forums, just to see what the general consensus was. There were some things said that were … I wouldn’t say they were eye-openers, but they were informative, to say the least. But at the same time, there were no defined sides. There were also people who were ecstatic. So I did peek for a bit, but then I just moved on. It’s hard to resist not looking, especially with a project like this.

You had a lot of scenes with Timothée Chalamet. What was it like to work with him?

Ah, oh Timothée! Beautiful, gorgeous Timothée — and what a lovely human being. You know when you’re working with a younger person, and you just know they’re destined for greatness? All I kept thinking about while filming was how excited I was for his future.

He’s just the real deal, and I loved working with him. He’s very focused. There were times he was in the zone, and you knew not to disturb him. You just kind of look at him and think, “This is the heartthrob all these teenagers are screaming about.” But at the end of the day, he’s just his lovely, floppy, funny self. And you forget that he’s the age that he is, because his talent is well beyond his years. He’s just a cool dude, and he deserves all the respect and kudos that he's gotten so far.

You’ve mentioned the timely political undertones in the film. Is there anything that you feel particularly relevant to the conversations we’re having today?

Oh gosh, there are so many. In regards to ecology and our environment, they have the summits that are occurring right now. We’re receiving all this news about how we need to look after our planet, and if we don’t hurry up, we’ll be in deeper trouble. There are newcomers who come to this land, that has basically been depleted, and are they even going to give the respect that it deserves?

There’s displaced people who have been in their own space that somehow encounter someone else taking over. There’s just so much. Almost every story line is timely. I think anyone over the age of eight is going to find something in this film that connects to them politically, as well as globally. Not to mention race and ethnicity and gender. We talk about ownership of worlds and people taking over. That’s something that has gone as far back as day one on Earth. I think we’re a much more rounded human race now. We should’ve found ways to live peacefully by now, is what I’m trying to say. If we took the amount of energy we put into arms and weapons, and put it into saving ourselves and our environment, I think we’d be alright.