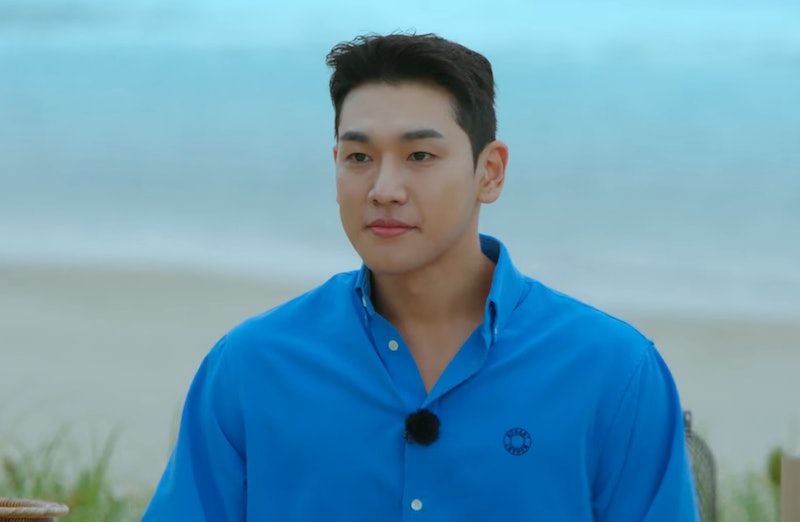 While Single’s Inferno has a lot in common with other beachy dating shows (see: Bachelor in Paradise), there’s one big element that makes it stand out from the rest. On the Netflix show, whose second installment premiered Dec. 13, contestants don’t share specifics about their life — like what they do for work or how old they are — until they get invited on an overnight date to Paradise. For contestant Shin Dong-woo, this was an attractive prospect.

“Single’s Inferno is a place where we compete with only our looks and charm, and not our occupation or age,” he said during his introduction on the show. “So I’m curious to see how much I can appeal to people with my charm.”

Just because Dong-woo’s details are kept a secret from his castmates doesn’t mean they have to be a secret to viewers. Here’s everything you should know about Dong-woo’s job, Instagram, pageant resume, and beyond.

As Dong-woo shared during his date with Shin Seul-ki, he works as a plastic surgeon, having received his medical degree from the Yonsei University College of Medicine. “I’ve seen my father impact others positively through the use of medical knowledge and technology,” Dong-woo explained on the show. “That’s what prompted me to go to med school.”

The reveal won over the hosts, who were watching from a separate room. “He’s too good to be true,” one said; “How is he even real?” wondered another.

As it turns out, however, Dong-woo is very much real — though the combination of his looks, charm, and chosen occupation may seem like something out of Grey’s Anatomy. (If you’re a fan, you’ll remember that Mark Sloan, aka McSteamy, was a popular plastic surgeon himself.)

Despite the demanding job, Dong-woo told Seul-ki that he’s able to balance it with his personal life. “No matter how busy I am, I never let work get in the way of dating someone,” he explained.

In the photo Dong-woo posted in his work uniform, his medical lab coat reads “Severance,” which is part of the Yonsei University Health System.

Dong woo’s Instagram is somewhat sparse, but the images he has posted prove that his life is defined by more than surgery alone. For example, he’s done several photoshoots: some in scrubs, some in streetwear, and some with no shirt at all.

He also has a dog named Thor, and despite having a brawny name, he is quite tiny.

Dong-woo’s Instagram also features his status as 2021’s No. 2 runner-up in the Mister Global Pageant.

There are also several photos of Dong-woo working out. As he explained in his intro, he lifts weights almost daily. “I feel very satisfied to see my body develop as I hit and surpass my limit,” he said.

As Dong-woo revealed during his date with Seul-ki, he is 32 years old.

More like this
Jin-young Reflected On His Relationship With Seul-ki After 'Single’s Inferno'
By Brad Witter
'Bling Empire: New York’ Star Tina Leung Has A Superhero Alter-Ego
By Alyssa Lapid
Everything To Know About 'Selling The OC' Season 2
By Brad Witter
Who Is Dorothy Wang Dating After The 'Bling Empire: New York'?
By Karen Fratti
Get Even More From Bustle — Sign Up For The Newsletter
From hair trends to relationship advice, our daily newsletter has everything you need to sound like a person who’s on TikTok, even if you aren’t.