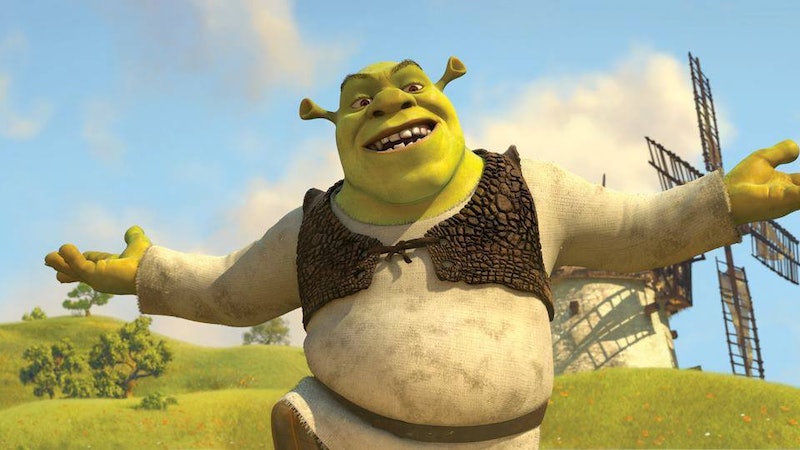 In 2001, Shrek was released as a new kind of animated tale. And I don't mean computer-generated, although the film was part of that movement in the early 2000s. I mean that the supposed kids movie Shrek had dirty jokes that may have gone over your head when you first saw it. The 2001 movie is smart, hilarious, and puts a modern twist on all those wholesome fairytale cartoons from your childhood, like Cinderella, Snow White, and Sleeping Beauty.

Shrek follows the title character, a so-called "ugly" verdant ogre (voiced by Mike Myers), who is pushed into an adventure made up of an Eddie Murphy-voiced Donkey and, eventually, finding love with Cameron Diaz’s Princess Fiona in a new kind of happily ever after. Like many animated tales, Shrek's jokes can be appreciated on many levels — and you can laugh and cringe at them even more once you're older and realize the real meaning behind some of them. Seriously, they got away with a lot of stuff that’ll leave you wondering, "How on earth did they sneak that joke into a movie for kids?"

Check out the twisted turns and adult jokes from Shrek that may have gone over your head upon first viewing.

Voiced by John Lithgow, Lord Farquaad is the single-and-ready-to-mingle, pint-sized man-child ruling the city-state of Duloc. Now, take out the R and say his name. It sounds suspiciously like the word "F*ckwad," doesn't it? Nice one, DreamWorks. We see what you did there.

OK, put the R back in and check out the scene in which Shrek and Donkey happen upon Duloc Castle, Lord Farquaad's large, phallic lair, and wonder if he's compensating for, ahem, something about his stature down below. Even Shrek notices and makes a quip about it to Donkey.

When (French) Robin Hood finds Princess Fiona, he sings a musical number in which the chorus begins with him belting out that he likes a “saucy little maid.” It’s clear this bit is headed toward him saying he likes to get "laid." Until he interrupts, of course. He also eventually grabs a small “blade” and melodically threatens to “ram it through” the heart. Seems like an unnecessary phallic weapon, especially since he has a sling of arrows on his back.

In The Dating Game/The Bachelorette segment of the movie where Magic Mirror lists the eligible princesses and possible mates for Lord Farquaard, he introduces Snow White as such: “Although she lives with seven other men, she’s not easy.” Predictably, the guards chuckle. Can’t a girl have seven platonic male roommates in the middle of the woods without people assuming a benefits situation?

Yes, there’s a scene in the kids movie that has Lord Farquaad preparing to pleasure himself to a photo of Fiona. Lord Farquaad is seen topless in his bedroom, with only his sheets to cover his bottom half. He then demands the visibly uncomfortable Magic Mirror to “show me the princess” and then takes a quick peep under the sheets. See it for yourself (or don’t and hide thine eyes).

The movie opens with Shrek reading a fairytale and then using a page from the book, one about true love and true love’s first kiss, mind you, to literally wipe his butt. You can hear him exclaim, “Like that’s ever gonna happen. What a load of...” as the toilet flushes. Perfect timing. It’s also quite the statement to open the subversive fairytale.

7. The “Welcome to Duloc” Song

Another butt-wiping joke comes in the form of the "Welcome to Duloc" song when the little wooden toys sing, “Please keep off the grass, shine your shoes, wipe Your…” They then bend over and pause for dramatic effect before coyly saying “face,” so what they really may mean to say is something else that rhymes with grass. A literal dirty joke.

In one scene, Fiona sings to a momma bird but ultimately fries the creature with her high notes before she grabs the bird’s baby eggs and fries them for breakfast. (Again, this is a kids movie.) But that’s not all. When Shrek wakes up to Fiona cooking the spoils of her murder, Donkey mumbles this in his sleep: “Oh, yeah, you know I like it like that” and “Oh, baby, come on.” Donkey has wet dreams, too. Who knew?

While Donkey and future wife Dragon are, um, "flirting," Dragon wraps herself around Donkey and feels around him. Donkey then cries out, “That’s my personal tail; you’re going to tear it off!” It’s unclear what's going on, but Donkey expresses his lack of consent and need to take things slower, calling Dragon out for the “unwanted physical contact” and communicating that he’s not ready for a “physical relationship.”

When the guards round up magical creatures in cages to evict them from Duloc, the infamous trio of bears from Goldilocks and the Three Bears are also held captive — Papa Bear, Mama Bear with her pink bow, and Baby Bear. In a later scene, Papa Bear and Baby Bear are free in the swamp, visibly upset and comforting each other. Where is Mama Bear, you ask? A shrewd TikTok user pointed out the grim fate of Mama Bear when she returns as part of the home decor in Lord Farquaad’s bedroom where her pelt and bow are on display as a rug. Now that’s dark.

In a scene where Shrek and Donkey are fighting about Donkey wanting to stay at the swamp and Shrek being anti-social, they exchange choice words, and Shrek calls Donkey a “jackass.” The word “jackass” literally means a male donkey, but it’s also one used to describe certain people with undesirable traits. Clever, Shrek. Clever.

This article was originally published on May 18, 2016