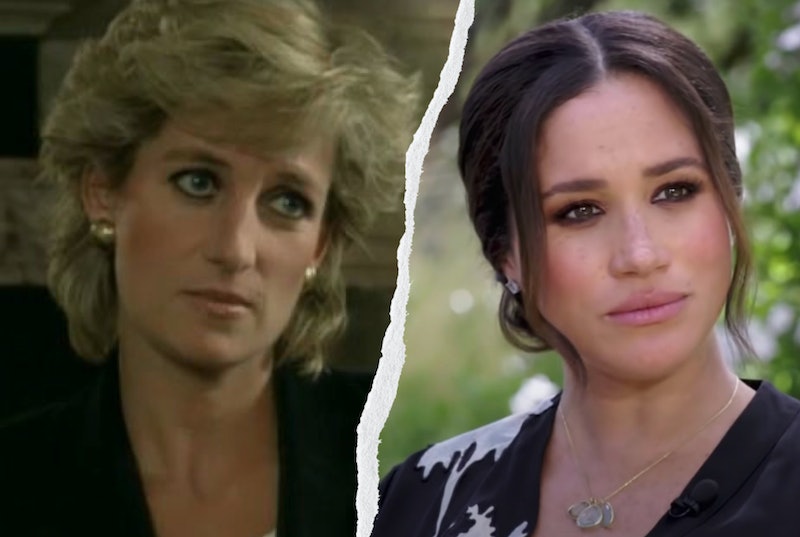 In 1995, Princess Diana gave her first post-royal interview for a Panorama special with Martin Bashir after her separation from Prince Charles. More than 25 years later, her son Prince Harry and his wife Meghan Markle sat down with Oprah Winfrey to give an equally revealing interview following their departure from the royal family last year.

Both interviews were deemed controversial at the time of airing. In 2022, the BBC apologised for its obtaining of the late Princess of Wales’ infamous sit-down with Bashir. Following an inquiry that concluded the broadcaster had fallen short of “high standards of integrity and transparency,” the BBC vowed to never air Diana’s Panorama interview ever again.

As many viewers have pointed out, the two interviews are similar in many ways, from the topics covered to the revelations about how royal life. Below are just some of the most striking parallels between the two, which may help us understand how Diana's legacy shaped Harry and Meghan's exit from the royal establishment.

1. On Joining The Royal Family

When Diana was asked by her interview Martin Bashir about how she prepared for royal life, she answered: "At the age of 19, you always think you're prepared for everything, and you think you have the knowledge of what's coming ahead. But although I was daunted at the prospect at the time, I felt I had the support of my husband-to-be."

However, as Diana went on to explain, no one ever "sat her down" to discuss what exactly her role as the Princess of Wales would entail. Despite eventually finding her footing, the process left her feeling extremely isolated. "You had to either sink or swim," she told Bashir. "And you had to learn that very fast."

During the Oprah interview, Meghan detailed a very similar experience, explaining that she went into royal life "naïvely." She admitted that she "didn't grow up knowing much about the royal family", and had to resort to Googling information like "the words to the [British] national anthem."

Meghan says she overwhelmed by the amount of freedom taken from her. "When I joined that family, that was the last time... that I saw my passport, my driver's licence, my keys," she told Winfrey. "All that gets turned over."

Diana described the media attention as the most "daunting aspect" of her relationship with Prince Charles. The late princess said that she and her husband were told that the media attention would "go quietly" following the engagement and wedding, but that wasn't the case. Instead, the spotlight fell specifically on Diana, which she described as an "isolating experience." She explained, "I was the one who was always pitched out front, whether it was my clothes, what I said, what my hair was doing, everything."

For Meghan and Harry, the treatment they received from the British press was a huge factor in their decision to leave royal life. "It was a large part of it," Harry told Oprah, going on to speak specifically about the racism his wife was subjected to. "The UK is not bigoted, the UK press is bigoted, specifically the tabloids. But unfortunately, if the source of info is inherently corrupt or racist or biased, then that filters out to the rest of society."

Diana discussed her diagnosis of post-natal depression openly with Bashir, as well as how those around her reacted at the time. While she said she received "a great deal of treatment", she felt as though she "was the first person ever to be in this family who ever had a depression or was ever openly tearful."

Diana went on: "I never had a depression in my life. But then when I analysed it I could see the changes I'd made in the last year had all caught up with me, and my body had said: 'We want a rest.'"

Even so, Diana said she still felt "compelled to go out and do engagements" while trying to heal mentally. She didn't want to "let people down," especially those who supported her.

During Sunday's interview, Meghan was also very open about her own mental health, revealing that she "didn't want to be alive anymore" during her first pregnancy. "I was clear, it was real, it was frightening, and it was a constant thought," she said.

During this time, Meghan still made public engagements but only because she feared she couldn't be left alone. Meghan said the thoughts running through her mind at the time were, "I can't be left alone; I'm afraid of what I might do."

After separating from Charles, Diana stepped back from royal duties and decided to focus more on her charity work and leading a private life. "The pressure was intolerable then, and my job, my work was being affected," she said. "I was constantly tired, exhausted because the pressure was just, it was so cruel."

She continued: "I thought the only way to do it was to stand up and make a speech and extract myself before I started disappointing and not carrying out my work."

During their interview, Harry and Meghan spoke about the process of leaving royal life. They said they wanted only to step back from their professional roles, and not the family as a whole. "We were saying, 'OK, if this isn't working for everyone, we're in a lot of pain, you can't provide us the help that we need, we can just take a step back,'" Meghan told Oprah.

Harry added, "It's really sad that it's gotten to this point, but I've got to do something for my own mental health, my wife's, and for Archies, as well, because I could see where this was headed."

Throughout the Panorama interview, Diana made the importance of sharing her side of the story abundantly clear, as did Harry and Meghan with Oprah.

"Maybe there's a lot of women out there who suffer on the same level but in a different environment, who are unable to stand up for themselves because their self-esteem is cut into two," Diana explained. "I think every strong woman in history has had to walk down a similar path [of being seen as a threat], and I think it's strength that causes the confusion and fear."

With the support of each other, Harry and Meghan were able to explain their side of the story, using Diana's strength as a guide. Speaking about his mother and how she might react to his and Meghan's experience, Harry said: "I think she would feel very angry with how this panned out and very sad. But ultimately, all she'd ever want is for us to be happy."