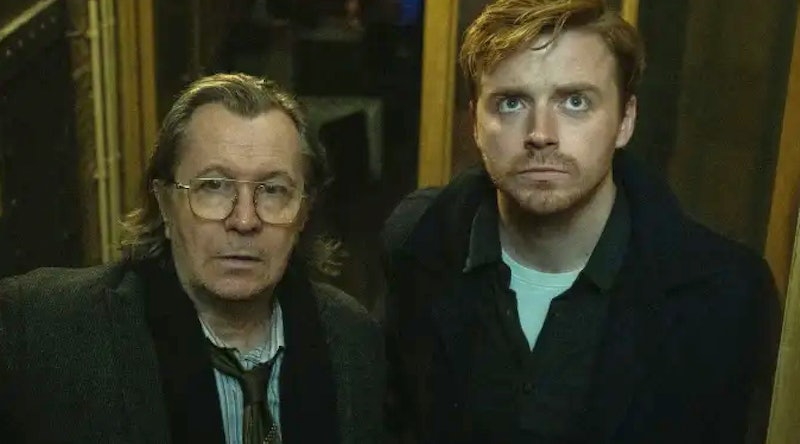 This article contains spoilers for Slow Horses, the book and TV series.

Written by award-winning author Mick Herron, Slow Horses, the first book in Herron’s Slough House thriller series, has been adapted for the small screen by Apple TV+. The six-episode series stars Oscar-winning actor, Gary Oldman (The Darkest Hour), as well as Kristin Scott Thomas (The English Patient), Jack Lowden (Dunkirk), Jonathan Pryce (The Two Popes), and Olivia Cooke (Ready Player One), in an ensemble cast. And the series has proven itself to be quite the gripping watch.

Oldman plays Jackson Lamb, the bandleader of a group of disgraced MI5 agents — disgraced in that they’ve messed up enough to have landed at Slough House, the “dumping ground” department of MI5. The agents are all looking for redemption, and one such agent is River Cartwright (played by Lowden), who was shunned for failing to prevent a terror attack at King’s Cross. When a man is abducted and his captor threats to behead him for all to see on the Internet, Cartwright seizes the opportunity to restore his reputation.

That’s the TV series, but how exactly did the novel end? Herron ties the plot together with fake bombs and hijackings. Diana Taverner (played by Kristin Scott Thomas in the series), Lamb’s boss, is hoaxed with a fake bomb by Lamb alongside Nick Duffy, the head of MI5's internal security. It turns out that Taverner is the one that organised the kidnapping of the young man, Hassan, in an attempt to get back into MI5’s good books.

River and Lamb uncover the hoax, and rather than Taverner coming out on top, she’s forced to realise that Lamb will be staying at Slough House for good, running things his way, and keeping her in check whilst doing so.

Speaking to Radio Times, Scott Thomas has said the series looks, "behind the mirror [of] James Bond. It's the sort of stuff you'd rather not look at." We’re intrigued to know what that means, and we can’t wait to find out if the book ending matches up with the TV finale.

Apple TV+ Trailer for Slow Horses.
More like this
Rupert Grint Just Shared A *Major* Update About Ron Weasley’s Future
By El Hunt
'Abbott Elementary' Fans Probably Missed This 'Parent Trap' Easter Egg
By Sam Ramsden
This First Look At 'The Gold' Shows Jack Lowden In A Whole New Light
By El Hunt and Sam Ramsden
Everything To Know About The 'Daisy Jones & The Six' TV Series
By Maxine Harrison and Brad Witter
Get The Very Best Of Bustle/UK
Sign up for Bustle UK's twice-weekly newsletter, featuring the latest must-watch TV, moving personal stories, and expert advice on the hottest viral buys.