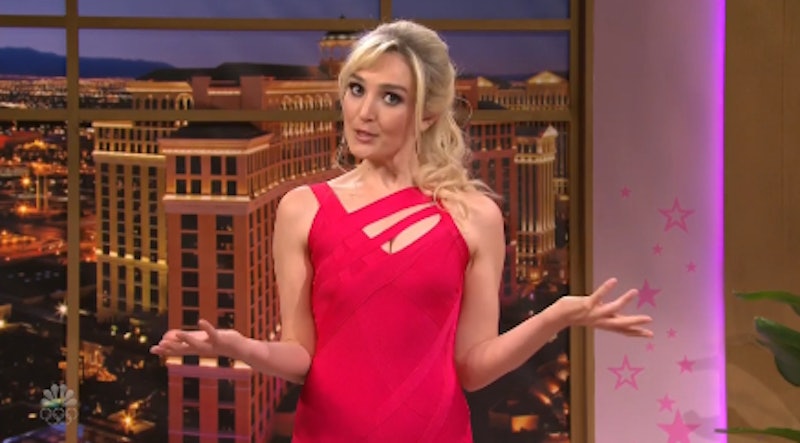 During this week's SNL cold open, "Britney Spears" (perfectly parodied by Chloe Fineman) led viewers through the messy mistakes made by Ted Cruz, Andrew Cuomo, and former The Mandalorian actor Gina Carano — all guests on an aptly named talk show, Oops You Did It Again.

The guests on the Saturday Night Live sketch's talk show, including a just-back-from-Cancún Cruz played by Aidy Bryant, all shared an uncanny knack for doubling down on their very public missteps (as he says, "I'm in a little bit of hot water... which I'm told is a thing no one in Texas has").

But the star of the show was the fictionalized Spears herself, who danced and referenced her highly publicized legal battle for independence following the Framing Britney Spears doc ("you all know me from my upbeat Instagram videos and the word conservatorship"). The character also brought up that infamous apology from ex Justin Timberlake.

"I'd like to give a quick shoutout to our sponsor, the Notes app. Are you looking to post a lame apology 20 years late? Go through the motions with the Notes app."

The fictional Spears took issue, too, with Cruz calling his ill-timed vacation his daughters' idea.

"As someone who was often blamed for other people's problems at a young age, maybe leave your daughters out of it, 'cause it could really mess with their heads."

Sounds like there is some serious #FreeBritney energy in the SNL writers' room. It was a Britney-filled night: Not only did Pete Davidson reference the singer during a Weekend Update segment, but NBC also aired Spears' 2000 SNL hosting gig earlier in the evening.