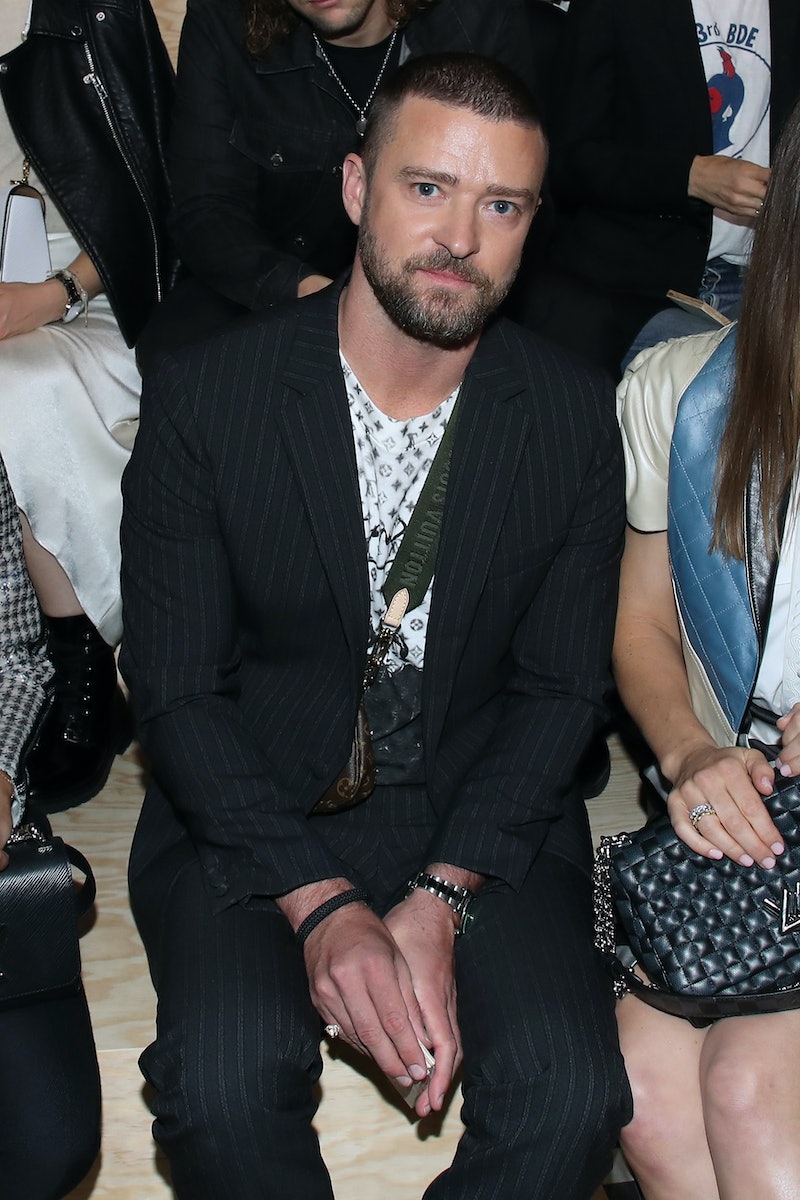 Justin Timberlake has finally responded to the Framing Britney Spears backlash — and apologized to Janet Jackson in the process. In a Feb. 12 Instagram post, the singer acknowledged his privilege as a white man in the entertainment industry and his role in the negative public perception of both women and their careers.

The Framing Britney Spears doc, which premiered on Hulu Feb. 5, observed Spears' relationship with Timberlake and accusations that she cheated on him. Viewers see footage of Diane Sawyer asking Spears, "What did you do?" suggesting she broke Timberlake's heart. His "Cry Me a River" video features a Spears lookalike cheating on him. And when a reporter asked, "Did you f*ck Britney Spears, yes or no?" he responded with a lighthearted, "OK, yeah, I did it!" Keep in mind, Spears' virginity was already an unwelcome point of interest for the press.

In his post, Timberlake also specifically mentions fellow musician Janet Jackson. Their performance in the 2004 Super Bowl ended with Timberlake accidentally ripping Jackson's top and exposing her breast. Ultimately, the incident led to her being essentially blacklisted from CBS and MTV and precluded her from future projects, including the following Grammys. Timberlake did not suffer those same repercussions. In fact, he was allowed to perform at that very award ceremony just days later. He also headlined the 2018 Super Bowl halftime show.

"I've seen the messages, tags, comments, and concerns and I want to respond. I am deeply sorry for the times in my life where my actions contributed to the problem, where I spoke out of turn, or did not speak up for what was right. I understand that I fell short in these moments and in many others and benefited from a system that condones misogyny and racism. I specifically want to apologize to Britney Spears and Janet Jackson both individually, because I care for and respect these women and I know I failed."

Referencing Hollywood, Timberlake added, "The industry is flawed. It sets men, especially white men, up for success. It’s designed this way. As a man in a privileged position I have to be vocal about this. Because of my ignorance, I didn’t recognize it for all that it was while it was happening in my own life but I do not want to ever benefit from others being pulled down again."

Reactions to Timberlake's apology range from skeptical to, sometimes, forgiving. Of course, it's not our apology to accept. One user used a JoJo music video thumbnail — aptly, for her song Too Little, Too Late — to describe the timing of Timberlake's apology. Another noted, "If you only apologize when you're in the midst of a personal PR catastrophe, it does not count :)"

Singer Brandi Carlile commented on Timberlake's post, saying, "Really beautiful to read this. I think it’s going to speak to a lot of people’s pain. I can’t wait to see how you get involved with elevating women and marginalized people. you’re an inspiring dude to me. ❤️💪🏼"

Back on Twitter, one user opted to use Timberlake's now-infamous song in condemnation of his delayed apology, asking, "Where were you almost 20 years ago? You made an entire career scapegoating these women without remorse or accountability because it lined your pockets. Cry me a river."

Spears and Jackson have not yet commented on Timberlake's statement.

More like this
Britney Spears Shares & Deletes Photos Of Justin Timberlake From 22 Years Ago
By Jake Viswanath
Britney Spears Shared The Real Reason She Shut Down Her Instagram Account
By Brad Witter
'Friends' Star Maggie Wheeler Offers Support To Matthew Perry After Reading His Memoir
By Alyssa Lapid
The 'Scream 6' Trailer Shows Off Hayden Panettiere's Return & Ghostface In NYC
By Jack Irvin and Jake Viswanath
Get Even More From Bustle — Sign Up For The Newsletter
From hair trends to relationship advice, our daily newsletter has everything you need to sound like a person who’s on TikTok, even if you aren’t.