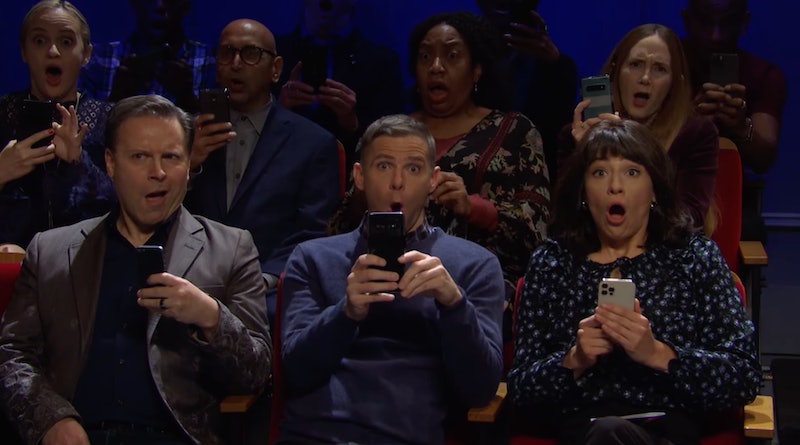 During the May 14 episode of Saturday Night Live, Jesse Williams’ nude scene leak got the sketch treatment — sort of. In case you missed it, leaked images of the Tony-nominated actor’s nude moment in Take Me Out recently surfaced online after reportedly being captured and shared by a theatergoer, prompting a conversation about consent and, as Actors’ Equity put it, the “mutual understanding” between actors and audiences in theater. “Trampling on this agreement ... is a violation that impedes our collective ability to tell stories with boldness and bravery,” the group said in a statement.

In the SNL version of events, a very similar incident happens during a fictional performance — but unlike Take Me Out, which earned four Tony nominations, it’s clear that this work isn’t destined for acclaim. “As I’m sure you are aware, there is a penis in this show,” announces Kenan Thompson as the director ahead of the play. “Yes, we go there — and it better not end up online. If you post it, you will lose the penis. OK? So just enjoy it, and then let it go.”

He also warns that due to COVID, the performance will be put on entirely by understudies — who only had 30 minutes of rehearsal before showtime. Naturally, things were a little rough, ranging from bad accents to forgotten lines. Incidentally, Bowen Yang’s turn as the nude performer is the only part of the play that goes off without a hitch — and every member of the audience has their phone out to capture the moment.

Williams (who played himself on SNL earlier this season) didn’t respond to the sketch — but earlier in the week, he did speak out against the incident it was based on. “I’m not really worrying about it. I can’t sweat that,” he told the Associated Press May 12. “We do need to keep advocating for ourselves. And it’s wonderful to see a community push back and make clear what we do stand for, what we don’t. Consent is important, I thought. So, let’s keep that in mind universally.”