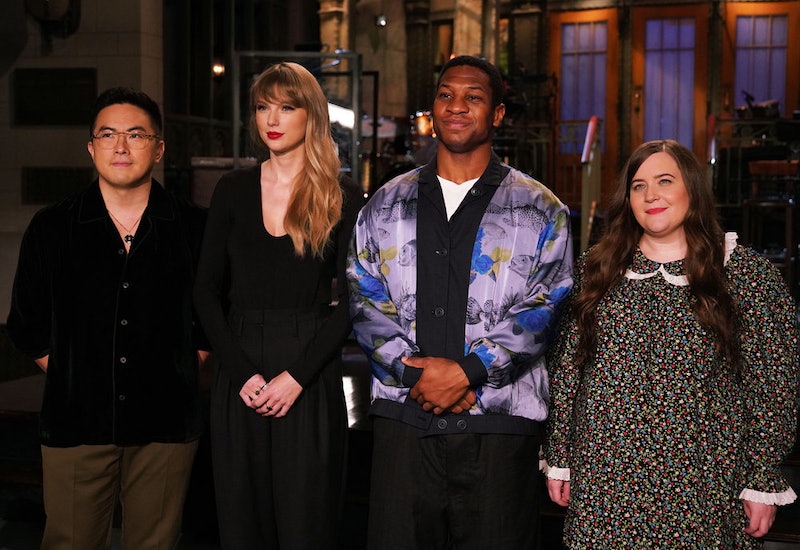 A self-proclaimed “big Swiftie,” Saturday Night Live’s Bowen Yang was naturally excited when Taylor Swift performed on the Nov. 13 show. Days prior to NBC’s live broadcast, the Emmy nominee even got to meet the singer while filming promos. “People at SNL threw me a bone and said that, ‘You can stand next to her,’” Yang recounted to host Jimmy Fallon during a Friday, Dec. 17 virtual interview on The Tonight Show. “It was a huge deal. I got to tell her that, in an improvised line in a promo, that her song ‘Treacherous’ is the sound of falling in love, which I believe to be true.”

The “meat” of the story, however, was how he ended up getting a photo with Swift and Sadie Sink, featuring a mirror-reflection cameo from photographer Ryan Reynolds. (Really.) “Sometimes they say, like, don’t meet your heroes. She’s a hero,” Yang said of Swift, adding that she “was lovely all week.” Ignoring that well-meaning advice, he worked up the nerve to approach the 11-time Grammy winner after her live 10-minute “All Too Well (Taylor’s Version)” performance.

“I was like, ‘You know, after the show, she’s probably riding high. She doesn’t want to talk to, like, the riffraff like me,” Yang shared. Even so, he stood outside her dressing room, trying to decide whether or not to knock on her door.

The third-season SNL cast member eventually went for it, and Swift “couldn’t have been nicer,” he added. “I said, ‘I don’t normally do this, but can we please take a picture?’” he recounted. “And then, she was like, ‘Of course, can Sadie Sink the star and the muse of my music video, be in it?’ I was like, ‘Of course!’” After Swift asked who should take the photo, “Deadpool himself, Ryan Reynolds, was like ‘I’ll do it!’” Yang said.

Blake Lively’s foot even made a cameo in the Instagram photo, which Yang captioned, “RIGHT THERE WHERE WE STOOD!!!!!!” — lyrics from Swift’s 2012 “Holy Ground” track. The Gossip Girl alum pointed it out herself after Yang posted the photo to his Instagram, writing, “Whose gorgeous foot is that?!”

In addition to all the aforementioned celebrities, several other famous faces came out to support Swift’s musical guest turn, which also included her appearance alongside Pete Davidson in the “Three Sad Virgins” parody music video. Joining her on set were Selena Gomez, Joe Jonas, Sophie Turner, Cara Delevingne, and Anya Taylor-Joy.

Yang’s backstage experience may have been the best part of the whole night, though. “Pure bliss. I’m blissed out,” he told Fallon of his emotional state in the photo.