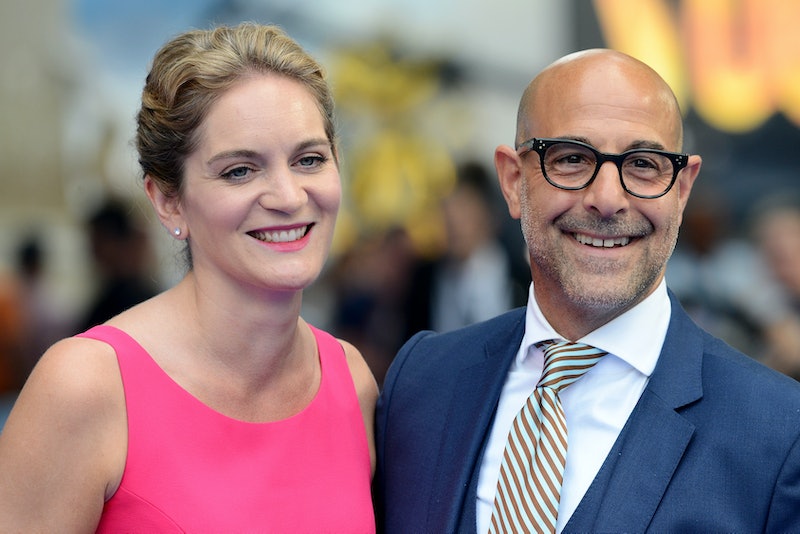 Stanley Tucci is the leading man in all of our hearts, as evidenced by his immaculate catalog of films, but he has only one leading lady around his arm. The Oscar-nominated actor is married to literary agent Felicity Blunt, the sister of his Devil Wears Prada co-star Emily Blunt (yes, this means John Krasinski is his brother-in-law). In fact, it was Emily who introduced them to each other in the first place, and while it wasn’t love at first sight, they did eventually get married, proving what a good matchmaker Emily is.

During their decade-long marriage, Tucci and Blunt have kept a relatively low profile, but never fail to support each other’s projects — especially when it comes to food. The low-key couple charmed Instagram followers in 2020 when Tucci started giving the most calming and charming cooking and cocktail tutorials, with Blunt acting as the loving and helpful camerawoman (and sometimes Emily and Krasinski as his unhelpful assistants), which eventually spawned his CNN cooking show Stanley Tucci: Searching for Italy. Read on for Tucci and Blunt’s full relationship timeline.

Tucci first met Blunt at the red carpet premiere of The Devil Wears Prada in June 2006 after Emily introduced her co-star and her sister to each other. At the time, Tucci was married to his first wife, Kathryn “Kate” Tucci, but both of them became friendly with Blunt. “Felicity —Emily's sister, my wife — she and Kate talked at the premiere that night and I have a photo of them together, which is so odd,” Tucci told the WTF With Marc Maron podcast in 2021. “And then many years later, I ended up marrying Felicity.”

2010: They Reconnect At Emily’s Wedding

Tucci and Blunt reconnected at Emily Blunt’s wedding to John Krasinki in 2010, which took place over a year after Kate passed away from breast cancer. The two hit it off once again, and things eventually turned romantic. “Emily loved Stanley on the set of Devil, and just thought they would hit it off, so she set them up,” a source told US Weekly in 2011. “Felicity is a lovely person and very warm and comforting.”

Tucci and Blunt got engaged in 2011 after a year of dating. But as he told Maron in 2021, he initially felt pangs of guilt after proposing to his now-wife, since they had only re-met a couple of years after Kate’s passing. “I panicked instantly afterwards," he explained. “It was very hard to go on vacations at first, really hard to go with Felicity someplace. I felt guilty. It’s horrible.”

In another interview with CBS Sunday Morning, Tucci explained that he still grieves Kate to this day, but keeps in mind that she would want the actor to move on. “It’s still hard after 11 years,” he said. “And it always will be hard. But you can’t let it, and she would never want any of us to wallow in that grief and let it take over our lives. She wasn’t like that.”

2012: The Couple Secretly Gets Married

On Aug. 8, Tucci casually announced that he had married Blunt in a brief interview with the New York Daily News. Just weeks after their private nuptials, the couple celebrated their marriage with a bigger ceremony and reception in London, where Emily served as her sister’s maid of honor and actor Steve Buscemi was Tucci’s best man. The star-studded guestlist also included Emily and Tucci’s Devil Wears Prada co-star Meryl Streep, Patricia Clarkson, Julianne Moore, Colin Firth, and Kenneth Cole, which would make one hell of a cast for a movie.

2014: They Write A Cookbook Together

Fans already associated Tucci with food after his 1996 film Big Night, but he first shared his love of food with Blunt when they co-authored The Tucci Table in 2014, which includes recipes that share both his Italian history and her British roots.

Oct. 2014: Felicity Is Pregnant With Their First Child

On Oct. 19, Tucci told US Weekly that he and Blunt were expecting their first child together. “I'm very excited to be a dad,” he told the outlet. “It’s incredible. I'm most excited to have a baby with Felicity and for the baby to be healthy.” Tucci shared three children with his late wife Kate, 22-year-old twins Nicolo and Isabel, and 20-year-old daughter Camilla. While it marked Blunt’s first child, he had no concern about that either, gushing that she would be a “great” mother.

Jan. 2015: The Couple Welcomes Their Son

On Jan. 25, Tucci and Blunt welcomed their first child together, a son named Matteo Oliver, and confirmed the announcement in a hilarious statement to PEOPLE. “I believe he is mine,” Tucci joked. “We are all thrilled to welcome him to this cold, cruel world.” On a more serious note, he added that his family was “thrilled that he is here and healthy.” After the outlet posted about the baby’s arrival on Twitter, Blunt replied, “Thank you!! He's a cutie!”

In an interview with The Guardian, Tucci commended Blunt for taking such great care of him and his three children with his late wife Kate. “It is not easy to find somebody who is going to take on three teenagers and a widower,” he remarked. “That’s a lot. But she was willing to take on that challenge. She cares for the kids as if they are her own, and it is a tough role, being a step-parent.”

On April 19, Tucci and Blunt welcomed their second child together, a baby girl named Emilia Giovanna. The couple had announced their pregnancy only a month prior at a screening of Tucci’s film Final Portrait, which he wrote and directed, by showing off Blunt’s baby bump, which was adorably rubbed by her sister Emily and friend Blake Lively.

Bored at home in April 2020, Tucci decided to teach his followers how to make a negroni cocktail by crafting one for his wife, who filmed the tutorial for Instagram. Immediately, Twitter praised the actor, calling it one of the most calming things they’ve ever watched — even Chris Evans chimed in to praise his Marvel co-star. Blunt filming her husband’s cooking and cocktail tutorials became a regular occurrence. The videos even caused some to make rather explicit thirst comments, which Tucci took in stride. “Oh, my God, I was crying laughing at some,” he told Vanity Fair in 2021. “Some of them were just so filthy and funny.”

In an interview with PEOPLE, Tucci opened up about his cancer diagnosis in 2017, which left him unable to eat and dependent on a feeding tube after undergoing chemotherapy and radiation treatments on his tongue. He credited his wife for helping him recover during the tumultuous period. “Felicity's undying attention, affection, and encouragement got me through it,” he said.