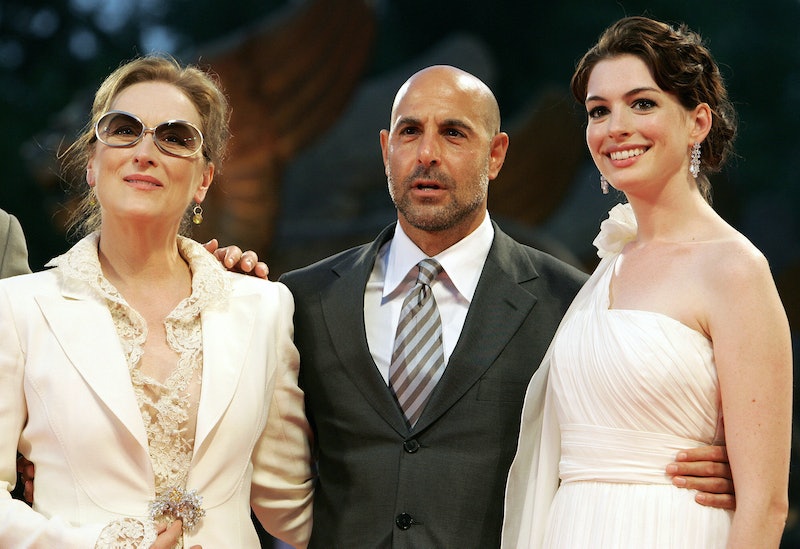 Emmy-winning actor Stanley Tucci has been the backbone of so many of your favorite films, including Easy A and The Devil Wears Prada. Without his supporting turns as the rock-solid confidant, the supportive BFF, or the empathetic father, these quintessential coming-of-age or over-the-top films wouldn’t have nearly as much warmth and humor. And the few times that he’s gotten the chance to play the leading man, like in the tearjerker Supernova, only remind the industry to give him more lead roles.

Lately, Tucci has been a different kind of aspirational. He hosts the CNN travel series Searching for Italy, which returns on Oct. 9 for Season 3, leaning into his love of cooking and his Italian heritage to discover the gems of the region — and making us all very hungry along the way.

Tucci has been nominated for a Tony, a Grammy, and an Oscar, giving him EGOT potential in the future. He already won three Emmys for Winchell, Monk, and Park Bench with Steve Buscemi. But frankly, it’s a crime that Tucci hasn’t won an Oscar. These nine films and TV shows starring Tucci prove he deserves more recognition from award shows. Spoilers ahead.

Andy (Anne Hathaway) wouldn’t have survived as the assistant of Miranda Priestly (Meryl Streep) without Nigel (Tucci), the most loyal art director and confidant of them all. He knew Miranda in and out — even when she screwed him over on a new job — and took a chance on giving Andy a makeover, being the first to spot her potential at Runway.

Tucci’s only Academy Award nomination to date was for his turn in 2009’s The Lovely Bones, in which he played the serial killer who cruelly murdered the central character Susie Salmon (Saoirse Ronan), going darker and more sinister than he ever had in his career to this point.

Stream The Lovely Bones on Starz

No offense to our actual parents, but we all want Stanley Tucci to be our dad. Emma Stone’s onscreen father in her breakout comedy is remarkably open, utterly embarrassing (in a loving dad way), and perhaps the least judgmental person alive. He’s all dad jokes all the time — but you won’t be cringing over his punchlines.

Rent or Buy Easy A on Prime Video

Burlesque is another great film where Tucci’s acting is top-notch — he hadn’t met his co-star Cher until they were cast together, which could have fooled any viewer with their close-knit chemistry. He plays Sean, the right-hand man and dearest friend of Tess Scala (Cher), who later becomes a trusty confidant for her burlesque club’s newest dancer Tess (Christina Aguilera).

As the host of The Hunger Games, where literal children from the 12 districts of Panem kill each other until one victor is left standing, Caesar Flickerman should be the guy you love to hate. Instead, you hate that you love him. Tucci makes grim tragedies sound entertaining and outdoes Ryan Seacrest when it comes to building suspense.

We’ll keep repeating it: Tucci deserves an Oscar. It’s unfair that he wasn’t even nominated for his role in Spotlight, which won Best Picture for crying out loud. As the attorney representing victims of sexual abuse in the infamous Boston Catholic Church scandal, Tucci shed light on their stories, brought truth to power, and fought for justice in a way only he could.

You can’t create something as iconic as a series about Joan Crawford and Bette Davis’ infamous rivalry and not have Tucci in it. You just can’t. Luckily, Ryan Murphy knew this and cast him as Jack L. Warner, the head of Warner Bros. who had to deal with the ladies’ petty behavior as they were filming What Ever Happened to Baby Jane?

Tucci teams up with Meryl Streep again in this biopic about Julia Child’s early career in the cooking industry. An avid home cook himself, starring as Julia’s supportive husband Paul Child in Julia & Julia wasn’t too far off from Tucci’s real-life persona, and he and Streep continue to bank on their onscreen chemistry in different types of roles.

In his most emotional role yet as a writer slowly succumbing to dementia, he takes a road trip, which just might be his last, with his pianist partner (Colin Firth) across England’s Lake District. The actors are beautiful as perhaps the most loving couple you’ll ever see, even as their relationship becomes all too real.

More like this
Here’s Everything Coming To & Leaving Netflix In February
By Jake Viswanath
Pamela Anderson’s Dating & Marriage History Could Be Its Own TV Series
By Jake Viswanath
What Is Pamela Anderson’s Net Worth? She Was Never Paid For Her Stolen Sex Tape
By Hugh McIntyre
'GoT' Star Emilia Clarke Says She "Just Can't" Watch 'House Of The Dragon'
By Brad Witter
Get Even More From Bustle — Sign Up For The Newsletter
From hair trends to relationship advice, our daily newsletter has everything you need to sound like a person who’s on TikTok, even if you aren’t.