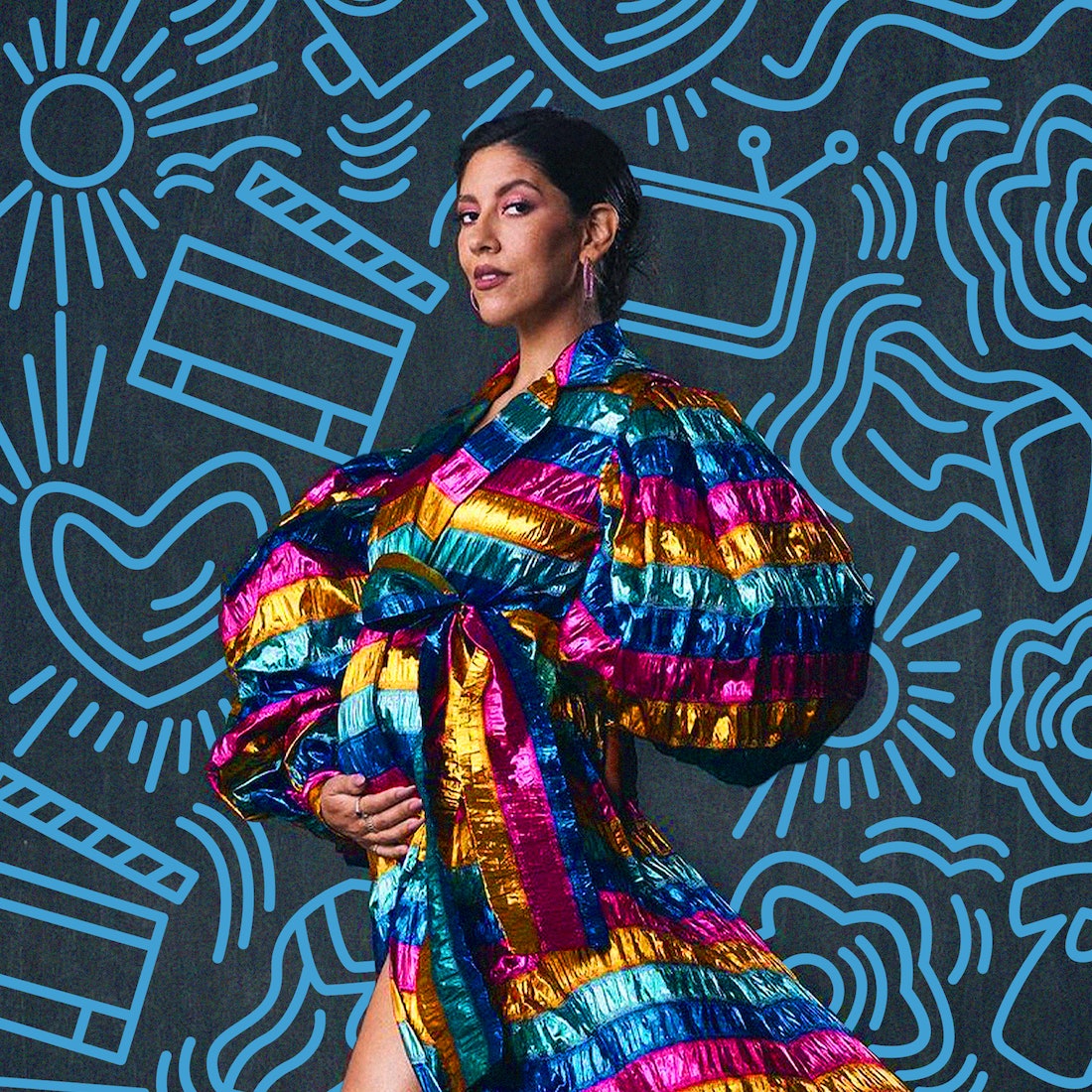 During Pride Month 2021 alone, Stephanie Beatriz announced her pregnancy, finished shooting her role as Detective Rosa Diaz in the final season of NBC’s Brooklyn Nine-Nine, and danced her way into theaters as Carla in the film adaptation of Lin-Manuel Miranda’s In The Heights. “I feel really grateful, sometimes very sad, sometimes really happy, and sometimes really gassy,” the 40-year-old entertainer tells Bustle, adding that she’s trying to stay present. “I think when big, difficult things happen in your life, like wrapping [Brooklyn Nine-Nine], it would be easy to sort of charge through it and push down feelings. I’m just allowing them to come as they come.”

Over the past eight years, Beatriz has won over audiences as the outwardly gruff, yet secretly kindhearted Detective Diaz on Brooklyn Nine-Nine. Throughout seven seasons, Rosa has bloomed alongside Beatriz, even echoing major moments in her personal life. After Beatriz came out as bisexual via a one-word tweet in 2016, Rosa also came out as bisexual on the show’s fifth season in 2017. Now, as the show prepares to air its final season starting in August, Beatriz thinks fans will be “really satisfied” with her character’s ending. “In the words of Jake Peralta, it’s going to be super toit,” says Beatriz, jokingly quoting co-star Andy Samberg’s character. “Obviously you can’t make everyone happy, but we will hopefully make a lot of people happy.”

We really want all the same things in life: to feel happy, to be seen, to feel safe, to feel love. And we all deserve them.

Beatriz’s career is soaring to even greater heights this June, as she’s stepping into Carla’s shoes in In The Heights, which sets itself apart from the musical with a few key changes such as the decision to have Carla and salon owner Daniela (Daphne Rubin-Vega) be in a committed relationship. Beatriz considers it a “brilliant shift” to the original storyline. “To have Carla and Daniela be gay and layered into that community and be totally accepted, not struggling to be heard, or fighting because they’re out, or not being accepted by the people they love, but just part of the family, I just love that,” Beatriz explains.

It’s through LGBTQ+ representation in TV and film that Beatriz believes art can usher in positive change. It’s a discussion she is trailblazing with her refreshingly honest and nuanced portrayals of LGBTQ+ characters, like Rosa and Carla. “Art is the way to move humanity forward,” she says. “When you create art, there’s a possibility for creating empathy in other people. That’s really what it’s all about. You can’t start to see someone as your equal, or as a fellow human being that deserves all the same rights as you do, if you don’t see them in the first place. If you don’t see them anywhere around you, how will you know that they’re just the same as you? ... We really want all the same things in life: to feel happy, to be seen, to feel safe, to feel love. And we all deserve them.”

Learn to drive! I didn’t learn to drive until I was about to move to L.A., and it was quite stressful learning as a full-on adult as opposed to a mini-adult. The other advice would be trust yourself more. I always knew what I wanted to do in life, but I got in my own way a lot of the time. I let my lack of confidence in myself and my abilities take control and I didn’t step into my fullest self for quite a long time. I think if I could go back and talk to my 16-year-old self, I would say that. Also JNCOs are not as cool as you think they are. Like, one pair is fine, maybe four pairs is a little overkill.

Can you recall a specific moment when you decided to step into your fullest self?

Oooh child, I wish it was one moment. I think it really is a series of tiny building blocks of self-confidence [that you gain] as you live your life. It’s little moments like having conversations with friends that bolster your self-esteem, or making yourself do something that feels completely uncomfortable and scary but also feels like it might be just within your reach. For example, auditioning for Brooklyn Nine-Nine was a total dream come true because I wanted to be on something like Parks and Recreation so badly.

Then, when I got the audition, I remember having a moment in my car where I was reading the script and was I thought, “Oh no, I don’t know if I should go in for this. I’m not that funny.” But there was also that sort of small voice of confidence in my mind that was like, “Wait a minute, how dare you? How very dare you, ma’am, talk yourself out of this before you’ve even given yourself the opportunity to get it.” It’s less one moment and more little tiny wins that build up over time.

What is your proudest moment as a member of the LGBTQ+ community?

I think some of my proudest moments are connected to the work that I’ve done. Rosa coming out as bisexual on [Brooklyn Nine-Nine] was really wonderful because it allowed conversations to happen with people all over the world. The response has been really meaningful. Sometimes, I’ll get a random message from someone or I’ll meet them in real life, and they’ll say, “That episode started me thinking, it made me feel like I wasn’t alone, it made me feel like I could come out to my parents, or the journey of that character made me feel like I was being seen on TV in a way that I’ve never seen myself.”

I think that’s so special to be able to do that on a sitcom. Network television is accessible to so many people; all you really need is a TV and almost everyone you know has one. The possibilities for reaching people and spreading ideas, empathy, love, and acceptance are so great, and I’m so grateful that I work with people like Andy Samberg, Dan Goor, and the rest of our writers that wanted to explore that storyline. I think that was a really special moment for me, and it continues to have positive repercussions in the LGBTQ+ community, which I’m really proud of. All of it is important.

I think they all need our support. One that I will name that I really like is the Sylvia Rivera Law Project, which provides help to people that might not necessarily have access to lawyers and representation. They do a lot of incredible work, including helping trans people get their names changed on the myriad paperwork to reflect who they really are. That’s a thing that most people take for granted, and I think that that can be a difficult and trialling journey when people are already going through so much.

I’m hopeful for the day that everyone knows of The Trevor Project like they know 911. That any kid that is LGBTQ+ will know about it and how to get in touch with someone if they’re feeling lost or desperate.

I also like The Trevor Project because if something like [it] had been accessible to me and many other people I know, we would’ve maybe made different choices in our own lives. We would’ve had a safe space to reach out to someone when we were in need. I’m so grateful that it exists and I’m hopeful for the day that everyone knows of The Trevor Project like they know 911. That any kid that is LGBTQ+ will know about it and how to get in touch with someone if they’re feeling lost or desperate. It can be such a hard thing for people to feel like they have any kind of community. I live in Los Angeles and I’m very lucky to live in a city that people flock to because they have open hearts and want to live and learn from a diverse group of people, races, ethnicities, and cultures. Not everybody lives in a place like that.

There’s so many people. One is a personal friend: Gaby Dunn. Gaby is so smart and cool and just lives their truth so beautifully. There’s also Janet Mock who has expanded into this really prolific artist, director, producer — she’s so multifaceted as an artist; I think she’s incredible. Then artists like Christian Siriano who is not only this incredible talent, but has this personality that people just gravitate toward. All he was ever doing was being himself on [Project Runway] and people were like, “Yes, I want that realness and I want to be dressed by that person because look how talented they are.” A lot of [my inspirations] are also my personal friends in the LGBTQ+ community. I think about them a lot because they’re not big names, social figures, or actors, but they are people who are making a difference all the time in their own lives and in other people’s lives.

I’m celebrating Pride by supporting brands that I feel are making actual headway in the LGBTQIA community — meaning that they’re not just showing up for this particular celebratory month, but they’re doing things year-round that help and support the community. I’m going to eat a lot of food because I’m also pregnant.

I wish there were parades and stuff to go to; I truly do dream of the day where we can take our own kid to a Pride parade. I think it’ll be so fun, amazing, and awesome and it’ll hopefully become a family tradition that we get to celebrate together every year. This is slightly personal, but my immune system is compromised slightly because I’m pregnant so I don’t totally feel safe being in big huge crowds yet or going to big parties to celebrate. I’m going to sort of make it a gentle, quiet celebration.

Any way of celebrating Pride Month is valid!

That is true! I was in New York City for World Pride when we were shooting In The Heights and it was the most electric, fun, incredible experience. As somebody who does get recognized during those parades as someone who’s out, bi, and in the public eye, that is also so special because you get to meet all of these strangers who see you, see themselves in you, and talk to you about their own coming out stories and journeys as human beings. I just adore that about Pride. I just love hugging full-on strangers that are waving their bisexual flags and we’re pointing in each other’s faces and screaming joyfully that we see each other. I really miss that, and I’m looking forward to doing that again in the future.