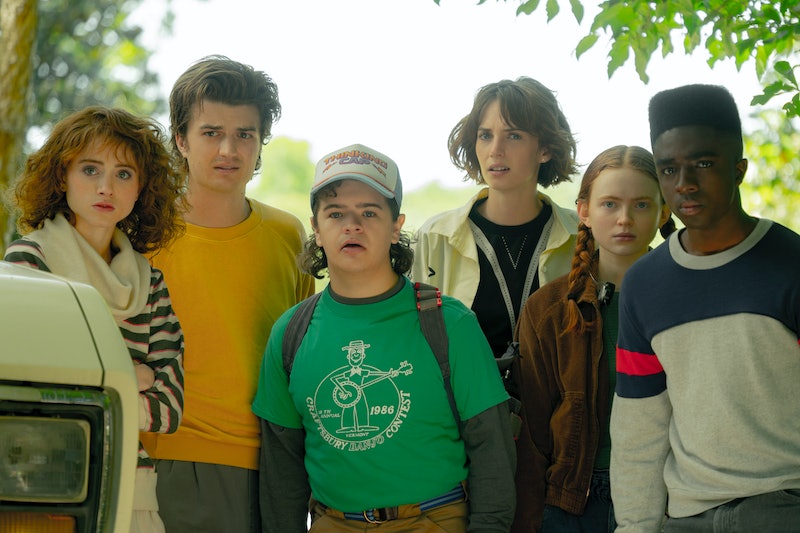 The first such moment happens between our resident Hellfire besties, Dustin (Gaten Matarazzo) and Eddie (Joseph Quinn). After Eddie sacrifices himself to save his friends from the Demobats, Dustin finds him dying — and he’s shattered. Though he tells Eddie that they’ll get him help, he soon realizes that there’s no coming back from those kinds of injuries. And Eddie knows it, too. “I didn’t run away this time, right?” Eddie asks, referencing his moment of fear when Chrissy (Grace Van Dien) died earlier in the season.

Dustin confirms that no, Eddie definitely did not run — and reluctantly promises to “look after those little sheep” for his fallen friend. “Good, because I’m actually going graduate,” Eddie says. “I think it’s my year, Henderson. I think it’s finally my year.”

The character’s next (and last) words are the tragic bit improvised by Quinn. “I love you, man,” Eddie says, prompting Dustin to respond, tearfully, “I love you, too.”

The next bit of improvisation happens during Max’s (Sadie Sink) death scene literally one minute later (Netflix, you’re sick for this!). Max’s second confrontation with Vecna turns out to be way more dangerous than the first — because this time, her Walkman was smashed and she had no Kate Bush to help her run up that hill to safety.

Her bones snap and eyes bleed — and when she finally falls from the air, she tells Lucas (Caleb McLaughlin) that she can’t see or feel anything. Lucas tries to assure her that she’ll be OK, but he’s clearly terrified himself. “I don’t want to die; I’m not ready,” Max cries.

“You’re not going to die, please hang on,” Lucas says, as Max takes a turn for the worse and actually dies in his arms — and knowing, now, that she technically comes back to life doesn’t make the scene any less tragic.

Here’s where Caleb McLaughlin’s heartbreaking improvisation comes in. “Erica, help!” Lucas calls for his sister in desperation, while pleading with Max to hang on.

Despite not being scripted, the tragic moment works perfectly with Lucas’ character arc this season. As McLaughlin recently told Netflix, “He’s usually a pretty stable, level-headed kind of guy. He’s the guy who’s like, ‘We’ll be fine. We’ll figure it out. It’s friends. It’s family. We’re going to do this,’” he said. “This season, he’s more vulnerable.”

As we wait to find out what, exactly, happens to Max in Stranger Things Season 5, it’s safe to say that these improvised moments will make your Season 4 rewatch (whenever you’re ready!) that much more emotional.

More like this
‘Stranger Things’ Stan Megan Thee Stallion Grilled Natalia Dyer About Nancy & Steve
By Brad Witter
Who Plays Trent In 'Never Have I Ever'? Benjamin Norris Calls His Character A “Himbo Stoner”
By Grace Wehniainen and Radhika Menon
‘Squid Game’ Creator Hwang Dong-Hyuk Just Dropped A Major Season 2 Tease
By Brian Anthony Hernandez and Bustle Editors
'Stranger Things' Season 5 Will Echo Season 1 In A Key Way, The Duffer Brothers Confirm
By Kadin Burnett and Sophie McEvoy
Get Even More From Bustle — Sign Up For The Newsletter