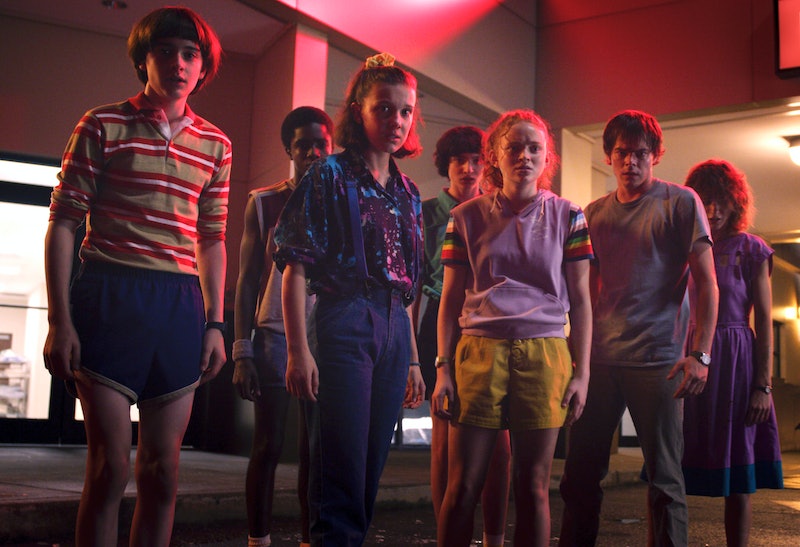 It’s been nearly three years since we last saw the psionic Eleven and the young Hawkins crew of Stranger Things. (And clearly, several of the young actors have the height to prove it.) But in the world of the show, Season 4 of Stranger Things picks up just six months after the battle at Starcourt Mall with the Mind Flayer. For the first time in the series, we see Eleven and Mike’s group of friends separated across the country, navigating the complexities of high school while struggling to move past what they lived through. Meanwhile, the long distance takes a toll on Jonathan and Nancy’s relationship, and though Joyce is far from Indiana, she still can’t forget Hopper’s death. Essentially, this is not the same tight knit squad they used to be, and it’s only when a new horrific villain emerges from the Upside Down that everyone finds their way back again.

Here’s a recap of everything you need to remember about Stranger Things 3.

Dustin Gets A Girlfriend

The Hawkins kids hit their early teen years in Season 3, and for all of them (except poor Will, who’s always third- or fifth-wheeling it) that means embarking on their first relationships: Eleven with Mike, and Lucas with Max. Even Dustin gets a girlfriend: Suzie, a Mormon girl living in Utah who’s quite the computer whiz. He talks with her using a giant radio antenna, and it’s during one of these sessions that he overhears communications that suggest Russians have set up a base nearby.

Billy Becomes A Vessel For The Mind Flayer

Though Season 2 ended with the Mind Flayer being banished from Will’s body and sent back to the Upside Down, we find out in Season 3 that it’s far from dead. It makes its way back to Hawkins and starts building a physical body using gooey, melted down rats, and later, humans. Leading all of them is Max’s brother Billy, who gets possessed when he crashes his car near the warehouse where it’s hiding.

Steve picks up a job at ice cream shop Scoops Ahoy in the Starcourt Mall, where he befriends Robin, a classmate he briefly entertains a romance with until he finds out she’s queer. Robin helps Dustin and Steve decode the Russian radio message, and they figure out it’s a code to get into a base located right under the mall.

Nancy is still in high school in Season 4 — I know, hard to believe at this point — and in Season 3 she and Jonathan get a summer internship at the local paper. It’s run by a bunch of sexist old men who never want to give Nancy a story, so she strikes out on her own to investigate reports of rats consuming poison. This eventually leads her and Jonathan to discover that the Mind Flayer is definitely back, and he’s amassing and liquefying an army. In one terrifying scene, the Mind Flayer takes over the bodies of all their coworkers, and Jonathan and Nancy have to fight their way out of a hospital.

Joyce, Hopper, and Murray Team Up

Meanwhile, Joyce looks into why her magnets aren’t working. She convinces Hopper that the demagnetization is happening all around town because there must still be an electromagnetic device turned on somewhere that’s still tunneling into the Upside Down. At first Hopper is convinced Joyce is making all of this up to avoid going on a date with him, but he eventually gets the mayor to admit the mall is just a front for a Russian operation.

This investigation leads them to Alexei, a Russian scientist who, with the help of Murray’s translating, tells them that the Russians plan to open up a portal right beneath Starcourt. Sadly, Alexei is killed in the process of helping them.

Back at the mall, Lucas’ younger sister Erica goes from badgering Steve and Robin for ice cream to helping them infiltrate the Russian base. She discovers that there’s a hidden elevator, but then she, Robin, Steve, and Dustin all get trapped down there. They’re all imprisoned, and Robin and Steve are tortured for information, with the Russians believing them to be American operatives.

Will, Mike, Lucas, Eleven, and Max eventually figure out that Billy isn’t really Billy anymore, but they fail to burn the Mind Flayer out of his body. They flee to Hopper’s cabin, but Eleven trying to psychically communicate with Billy alerts the Mind Flayer to their location. It attacks the cabin and seriously wounds Eleven’s leg.

Dustin, Erica, Steve, and Robin manage to escape the underground base just as Eleven and the rest show up at the mall to save them from the Russians. But then the pain from Eleven’s wound becomes too much. She manages to use her powers to remove a piece of the monster left in her leg, but it causes her powers to disappear just as Hopper, Joyce, and the giant Mind Flayer monster arrive.

Billy and The Mind Flayer Die — and Maybe Hopper

With everyone back together, and without Eleven’s powers, they figure out they need to close the portal in the base to kill the monster. The kids stay upstairs and lob fireworks at the Mind Flayer, while Joyce and Hopper rush downstairs. Eleven is able to free Billy from the Mind Flayer’s control by referencing his happy childhood with his mom, and he sacrifices himself to save Max and the kids.

Meanwhile, Dustin’s team drives out to his radio tower, and Suzie helps get Joyce and Hopper the keys to shut down the machine. But Hopper gets trapped by the machine while fighting a Russian operative, forcing Joyce to trigger the explosion and close the gate without him. The Mind Flayer finally dies, but seemingly so does Hopper. Dr. Owens and military forces then rush in, and the major is arrested. Months later, the attack is covered up as a chemical leak.

Heartbroken over losing Hopper and her powers, Eleven agrees to move with Joyce, Will, and Jonathan to California. It seems like everything is finally over, but in the final moments the season hops to Russia, where guards are instructed to feed a prisoner to a captive Demogorgon as long as it’s “not the American.” As all the trailers for Season 4 show, Hopper is still clearly alive, and the Hawkins gang’s dealings with the Russians and the Upside Down are clearly far from over.

More like this
'Stranger Things' Season 4 Volume 2 Trailer Teases New Episodes Coming July 1
By Grace Wehniainen and Gabrielle Bondi
Who Could Die In The Stranger Things Season 4 Finale?
By Kadin Burnett
Every Song In The Umbrella Academy Season 3
By Kadin Burnett
First Kill Left Multiple Cliffhangers To Resolve in A Potential Season 2
By Brad Witter
Get Even More From Bustle — Sign Up For The Newsletter