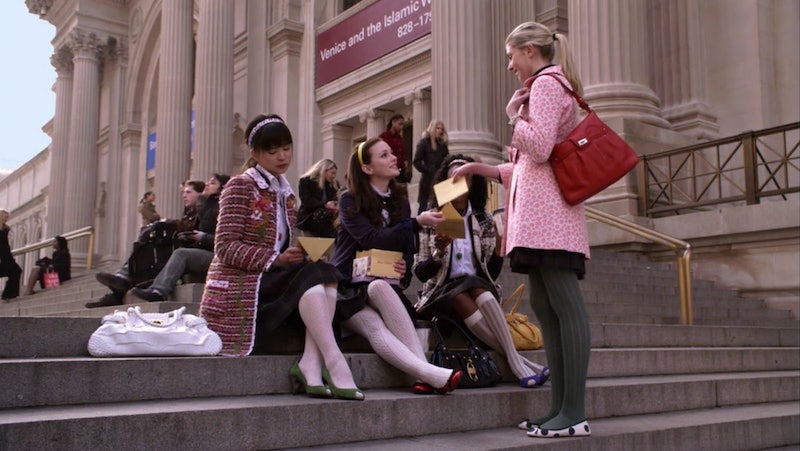 Gossip Girl traded in what was cool. Following a group of über rich New York teens whose lives revolved around an anonymous gossip blog where all of the salacious details of their lives were posted, the CW series spotlighted all of the best and newest 2000s trends, from babydoll dresses and pouf hairstyles to pink Motorola Razrs.

The pilot episode — which aired on Sept. 19, 2007 — includes many of these establishing details. Serena Van Der Woodsen’s (Blake Lively) return to New York City after a year at boarding school is the talk of the town thanks to Gossip Girl, the screen name of the titular gossip blogger. Her arrival isn’t welcome to her former best friend Blair (Leighton Meester), who suspects there’s something between Serena and her boyfriend Nate (Chace Crawford). But it is a chance for Dan (Penn Badgley) — one of the few lower income kids at the ritzy prep school they all attend — to finally act on his long-simmering crush on Serena.

All of the hallmarks of the show are there: the glamorous clothes, the reckless lifestyle, the surprising emotional resonance that echoed through character pairings like Blair and Serena. Even if the pilot carries several markers of the era — “There’s this thing called Myspace…save some trees, have a blog,” is something a character says to his dad to make him feel unhip — there’s a distinctive energy to it.

Now almost 14 years later, Gossip Girl will be back with a new cast and a new outlook for the upcoming HBO Max reboot. Plenty has changed since then — particularly when it comes to what’s considered cool — but here’s what stuck out in revisiting Gossip Girl’s first episode.

Every Song is a Time Machine

As Serena Van Der Woodsen pulls back into New York City, she’s flocked by the whistles of “Young Folks” by Peter Bjorn and John. Later, “What Goes Around … Comes Around” by Justin Timberlake lilts in the background as Blair and Nate hook up. The song choices are all very mid-2000s, but also catchy as hell — a Gossip Girl soundtrack requirement.

I believe it when Bell says she never got notes on her line-readings; they ooze with the sweetness and decadence of honey. Her narration is seamlessly woven into the show, mirroring to us as viewers how ubiquitous Gossip Girl is in the characters’ lives.

The Story Hits Different in the Age of DeuxMoi

Having only one gossip source, even for insular prep school kids, seems quaint in retrospect. While Serena’s return was likely crafted to symbolize the paranoia of paparazzi culture, it now feels like a precursor to the era of DeuxMoi and relying on fans as “curators of pop culture.” Cell phones are the nebulous ether supplying all of this information — even if it was pre-smart phone.

The first iPhone was released in June 2007, three months before Gossip Girl’s Season 1 premiere, so the phones in the pilot are noticeably dated (albeit still new for the time). There’s not yet an official texting culture: Jenny signs her name on her texts to Dan, her brother who presumably has her number saved. And Gossip Girl is as impervious to reality as ever: the show pretends those sliding T9 phones were good enough to snap a clear picture of Serena from across Grand Central Station.

If You Only Watched the Pilot, Gossip Girl’s Identity Would Kind of Make Sense

Big spoiler alert, if you care about Gossip Girl’s identity and somehow haven’t ruined the twist for yourself yet. Aside from making light of his sister’s safety at the hands of a would-be rapist and semi-stalking the girl that he’s had a parasocial crush on for years, Dan’s motivation for being Gossip Girl aligns pretty well in the pilot. He’s a jaded outsider with bad social awkwardness; blogging about his insider peers, whether because he’s desperate to become one of them or simply bitter about their ambivalence to him, actually tracks. But basically everything that happens after this episode means that Dan Humphrey has to be a sociopath to have pulled the whole thing off.

Serena and Dan date, just like their parents did. I hope they have fun at the support group along with Rory and Jess, Archie and Veronica, Betty and Jughead, Veronica and Duncan, Otis and Ola, and Allison and Scott.

The Humphreys are repeatedly called out as scholarship kids, coming from far below the means of their classmates. Watching the pilot now, it’s clear that there’s a bit of line-blurring there, because The Humphreys’ downtown Brooklyn loft is only tiny when compared to the extravagant penthouses of everyone else on the show. It’s possible that their dad’s rockstar money was enough for him to buy a place in New York City, and they live a little more hand-to-mouth now that he just runs an art gallery. But the difference between most people and the Humphreys is still not as vast as the difference between most people and millionaires, let alone billionaires.

The Chuck Storyline is Incredibly Messed Up

In later seasons, Chuck comes to represent a more complicated, nuanced character; his longtime romance with Blair helps to soften and turn him into force for chaotic good — or at least chaotic neutral.

But in the pilot, there’s an innate cruelty to him so fierce that you basically have to pretend he’s non-canonical in the episode. He tries to attack two girls, and whether or not you think he ultimately earns redemption, something feels deeply wrong about hearing Gossip Girl narrate how Jenny might become “Chuck’s victim” with relish.

It’s Not Surprising They Focused On Chuck and Blair

Leighton Meester (Blair) and Ed Westwick (Chuck) are two of the best actors on the series, and they make the most of what they are there to do. While Nate and Serena are set up to be something akin to a moral backbone for the show (or at least the more insulated rich kids), their performances are pretty slight. Meester, on the other hand, manages to channel every inch of emotion into Blair Waldorf, whether it’s a dismayed look at her mother’s party or an agreeable but curt line-reading of “You can go now” when Jenny almost oversteps with Serena. She is perpetually the perfect balance between cool and cruel.

More like this
24 Years Ago, 'Friends' Dropped Its Most Underrated Ross & Rachel Episode
By Grace Wehniainen
The 'Skins' Cast Shared The Reunion We’ve Been Waiting For
By Sophie McEvoy
Netflix Reveals First Look At Wednesday In The 'Addams Family' Spinoff Series
By Bustle Editors
A New 'And Just Like That' Table Read Pic Confirms A Key Character's Return
By Jack Irvin and Grace Wehniainen
Get Even More From Bustle — Sign Up For The Newsletter