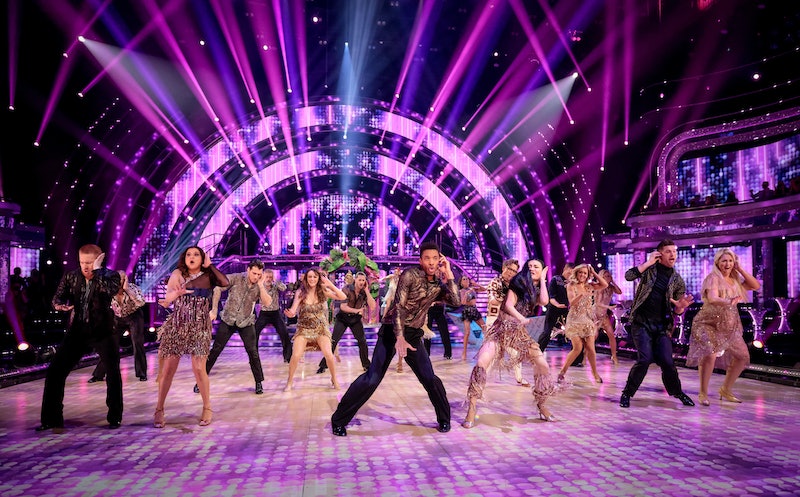 It’s safe to say that Strictly Come Dancing 2022 has entertained us all, and now the show is preparing to bring out the Christmas trees and hang up some tinsel for their time-honoured festive special. Since the show's inception, there hasn't been a year where Strictly hasn't stepped into Christmas with a pasa doble or two. This festive special is no different, with six contestants prepping to spend their Christmas on the Strictly dancefloor.

In 2021, First Dates' Fred Sirieix, The Repair Shop's Jay Blades, BBC broadcaster Moira Stuart, presenter Adrian Chiles, and Handmade: Britain's Best Woodworker presenter Mel Giedroyc took to the dance floor, but it was singer-songwriter Anne-Marie who took home the Christmas trophy with her pro partner Graziano Di Prima. This festive season you can expect to see Strictly hosts Tess Daly and Claudia Winkleman bring the sparkle, alongside "a merry musical performance" and "some spectacular group routines," according to the BBC.

As for what you can expect from 2022's batch of Christmas contestants, last year saw Jay Blade and pro Luba Mushtuk jive to the Only Fools And Horses theme song, while Mel Giedroyc and Neil Jones performed a street/commercial dance to "Ice Ice Baby." Anne-Marie and Graziano Di Prima wowed the judges and the voting audience with their cha-cha-cha routine to "Feliz Navidad," taking home the trophy.

While the nation anticipates what this year's edition of the dancing special will have in store, here's everything we know so far about Strictly’s 2022 Christmas episode.

The regular Strictly judging panel will be there for Christmas, including Craig Revel Horwood, Motsi Mabuse, Anton Du Beke, and Head Judge Shirley Ballas. There have been rumours that fan-favourite Bruno Tonioli could be making a special appearance, but the BBC tells Bustle they “aren’t commenting on this story.”

There will be six contestants in total for 2022’s Strictly Christmas special. Get familiar with the dancing hopefuls, below.

Three years after her husband Chris Ramsey took part in Strictly, podcaster, TV host, and author Rosie Ramsey is following in his footsteps by taking the festive plunge for this year’s Christmas special. “I am thrilled to be dancing in this year’s Strictly Christmas special! After watching my husband Chris compete a few years ago, I’ve been desperate to get on that dancefloor myself,” she told the BBC. Ramsey will be dancing with professional Neil Jones, and is currently prepping to going on tour with Chris for their podcast S**gged Married Annoyed in 2023 in addition to a second series of their talk show, The Chris & Rosie Ramsey Show.

BBC Radio 1 DJ and Live Lounge Host Richie Haywood-Williams, also known as DJ Rickie, was the second contestant to be announced for Strictly’s Christmas special on the Rickie, Melvin & Charlie Show on Radio 1. Despite being “too scared to do it” in the past, DJ Rickie is “ready to go for it, sequins n’ all” with professional partner Luba Mushtuk. Before working for the BBC, Haywood-Williams was KISS FM’s breakfast show presenter for a decade. Alongside his presenting duties on BBC Radio 1, he also hoss the BBC Sounds Footballers’ Football podcast.

Best known for her role as Emma Broker on Coronation Street, actor Alexandra Mardell was the third to be announced as a contestant on BBC Radio 5 Live on Dec. 1. “I’ve grown up with Strictly Come Dancing, and my mum always said she’d love to see me on the show so this really is the best Christmas present I could give her,” she said following the news that she’d be taking part in the festive special with pro Kai Widdrington. Mardell will soon have a leading role in the ITV series The Family Pile, set to air in 2023, so you can expect to see more of her in the New Year.

Stage and screen actor Larry Lamb was announced as the fourth Strictly Christmas contestant on The One Show on Dec. 1. Known for his roles as Mick Shipman in Gavin & Stacey and Archie Mitchell in EastEnders, Lamb also presents the Channel 5 docu-series Britain by Bike with his son George. He also appeared on I’m a Celebrity… Get Me Out Of Here! in 2016, coming in 7th. Lamb has been partnered up with Nadiya Bychkova to take on Strictly. “I can’t wait to get on the dance floor and learn a brand new skill ready for all those festive parties,” he told the BBC. “I am excited yet incredibly nervous but I know Nadiya will look after me, and I looking forward to adding a bit of extra sparkle to Christmas day.”

Girls Aloud’s Nicola Roberts was revealed to be taking part in Strictly’s Christmas special on Dec. 2, during Zoe Ball’s Breakfast Show on BBC Radio 2. Paired with Giovannia Pierce, Roberts will take to the Strictly dance floor as she celebrates the 20th anniversary of Girls Aloud. “It’s truly an honour to be part of Strictly, but to be invited to the prestigious Christmas day episode is something very special indeed. They’ve promised me extra glitter, sparkle and frosting all wrapped up together with a big bow on top,” she said. In 2020, Roberts made her West End debut in City of Angels, in addition to winning the first series of The Masked Singer UK.

The sixth and final celebrity to be confirmed for the Strictly Christmas special was 22-year-old presenter George Webster, who will be partnered with Amy Dowden. In October 2021, he became the first presenter on CBeebies with Down’s Syndrome. In addition to his work on the children’s channel, he is a public speaker, park runner, and ambassador for the disability charity Mencap and Yorkshire dance. He’s also an actor, and is set to appear in The Railway Children Return, Something Special, Casualty, and World on Fire. “I love Strictly and have watched it every year. I’ve always dreamed of being on the show one year and I’m so excited to be on this year’s Christmas Special!” he told the BBC. “To be partnered with Amy is such an honour, we get on so well, she’s so lovely and an amazing dancer.”

A specific time for the Strictly Come Dancing Christmas special has yet to be announced, but it will air at some point on BBC One and BBC iPlayer on Christmas Day.

More like this
Twitter Has Renamed Ekin-Su After *That* 'Dancing On Ice' Performance
By Sophie McEvoy
Turns Out George Clooney Is A Huge Fan Of This Classic British Game Show
By El Hunt
This Pre-'Love Island' Video Of Olivia & Zara Together Changes Everything
By Bustle UK
A New Netflix Doc Will Explore The Unsolved Murder Of Jill Dando
By Sam Ramsden
Get The Very Best Of Bustle/UK
Sign up for Bustle UK's twice-weekly newsletter, featuring the latest must-watch TV, moving personal stories, and expert advice on the hottest viral buys.

This article was originally published on Dec. 1, 2022