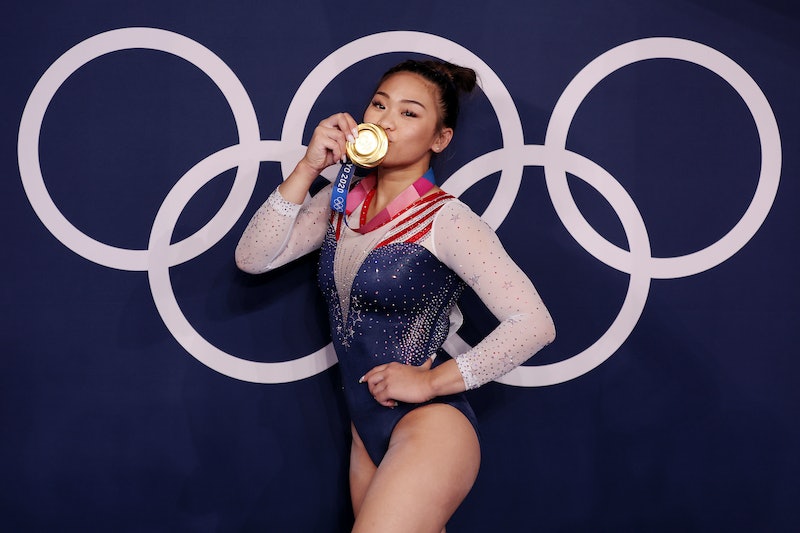 It’s another victory for Team USA as 18-year-old Sunisa Lee (aka Suni) won the gold in the women’s individual all-around gymnastics final at the Tokyo Olympics on July 29. Lee earned a score of 57.433, becoming the fifth-consecutive American to win the event, following Simone Biles (2016), Gabby Douglas (2012), Nastia Liukin (2008), and Carly Patterson (2004). Ahead of the 2021 Olympics, many people anticipated that Biles would place first in the all-around competition, but the 24-year-old withdrew earlier this week for mental health reasons.

Despite not competing, Biles cheered from the stands as Lee edged out silver medalist Rebeca Andrade of Brazil (57.298 score) and bronze medalist Angelina Melnikova of the Russian Olympic committee (57.199). Team USA’s Jade Carey, who replaced Biles, finished in 8th place. Earlier this week, Lee expressed her excitement over competing at the Olympics on Instagram. “Officially an Olympian,” she wrote. “Feeling proud and blessed. Thank you to everyone who has shown me nothing but their love and support. The hardest part is done, time to show out.”

Lee has a lot to be proud of. Prior to winning the gold, she already made Olympic history by becoming the first Hmong American Olympic gymnast. Ahead of the Games, she told People that it’s a title that “means a lot to the Hmong community” and that being an Olympian means “the world” to her. She also told the magazine that she wanted to compete not only for her family and her coaches, but for herself. “I’ve just been through so much,” she said.

Lee’s speciality is the uneven bars, where she performed the most difficult routine out of any finalists, nailing it to help her earn the gold. Watch her stunning routine, below.

Lee’s father, John, became paralyzed from the chest down in 2019 after falling from a ladder, according to People. Lee also recently lost her aunt and uncle due to COVID-19. And after such a challenging few years, Lee’s family wanted nothing more than to see her compete at the Olympics in person. However, due to pandemic-related restrictions, that wasn’t possible. “It’s really hard because it’s been all of our dreams and for them to not even be able to go to the Olympics and watch is something that is so heartbreaking,” she said. “But I think they’re going to have a little watch party.” John Lee spoke to TODAY this week about raising an Olympian.

Lee’s impressive victory followed the shocking Biles news on July 27 that USA Gymnastics announced on Twitter: “Simone has withdrawn from the team final competition due to a medical issue,” the tweet read. Later, Biles told the press that she withdrew to protect her mental health. Before the individual all-around competition had even started, Biles also withdrew from that event for the same reason.

READ NEXT: 9 Simone Biles Quotes About Protecting Her Mental Health

Lee later took to social media to show support for her teammate. “Proud of you & everything you’ve accomplished!” she wrote. “Thank you for being a role model and someone I look up to every single day.” And after calling Biles an inspiration both on the mat and in real life, Lee made sure Biles knew how much her teammates love and appreciate her. “Your fearlessness and ability to do the impossible does not go unnoticed,” she added. “We love you!!”

The feeling is mutual. After Team USA won the silver medal, Biles thanked Lee, Grace McCallum, and Jordan Chiles for stepping up when she couldn’t. “I’m so proud of these girls right here,” she wrote on Instagram. “You girls are incredibly brave & talented! I’ll forever be inspired by your determination to not give up and to fight through adversity! ... thanks for being there for me and having my back! forever love y’all.”

Peacock documented Lee’s journey to the gold, below: