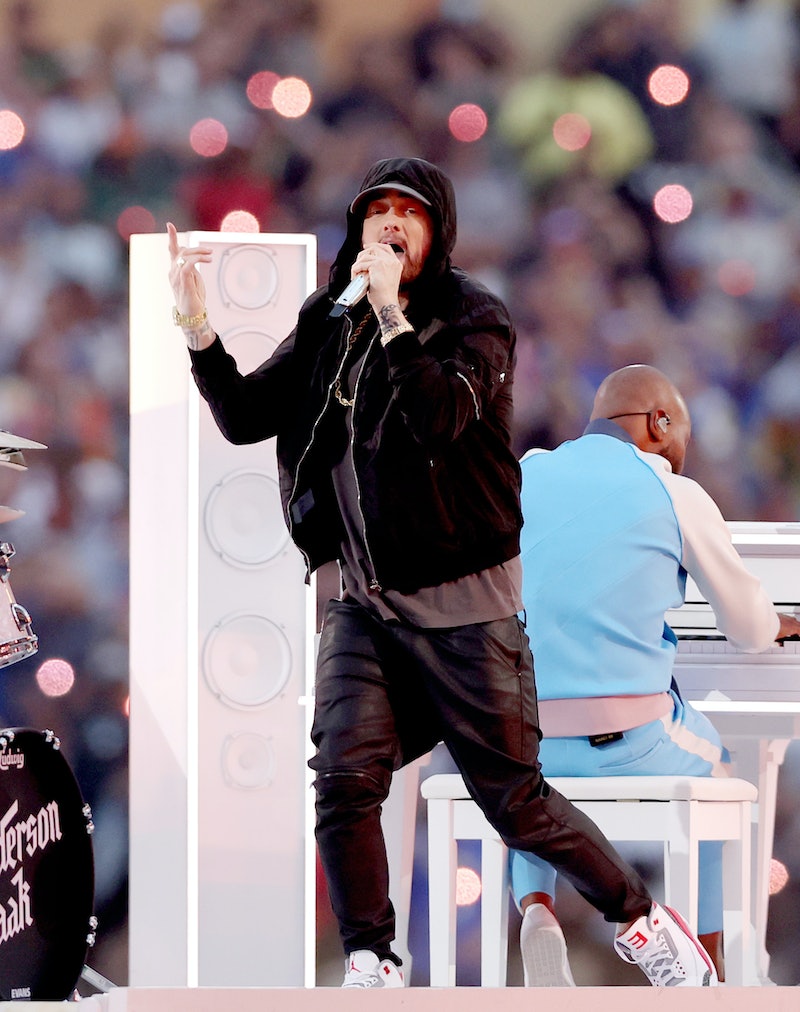 Finally, the moment we’ve all been waiting for tonight has arrived. (No, not Cassie and Maddy’s showdown in Euphoria.) During the Pepsi halftime show at the 2022 Super Bowl, Mary J. Blige, Snoop Dogg, Dr. Dre, Kendrick Lamar, 50 Cent, Anderson .Paak, and Eminem came together to take fans through their legendary catalog and pay tribute to the late Tupac Shakur. The set also featured another tribute from Eminem — one that the NFL was rumored to have tried to prevent.

Earlier Sunday, rumors swirled that the NFL wouldn’t allow Eminem to kneel during the halftime show in solidarity with Colin Kaepernick. According to reports from Consequence and Puck, the NFL rejected elements of the set, including one of Snoop’s outfits that reportedly had gang ties and a Dr. Dre lyric that states, “Still not loving police.” (Lamar’s set saw him skip the word “po-po” in the line “and we hate po-po, wanna kill us dead in the street for sure” from “Alright.”) However, An NFL spokesperson told The New York Times after the show that the league was “aware” the rapper would take a knee because officials “watched it during rehearsals this week.”

Kaepernick first kneeled during the national anthem in 2016 to protest police brutality. “I am not going to stand up to show pride in a flag for a country that oppresses Black people and people of color,” he told the NFL at the time. Kaepernick’s protest was met with an intense backlash that included what many considered to be blackballing by NFL owners, and the former San Francisco 49ers athlete has not played since 2017. Despite reiterating that he chose to kneel out of respect for the flag and as a way to exercise his free speech and stand up for social justice issues (“Once again, I’m not anti-American. I love America. I love people. That’s why I’m doing this. I want to help make America better”), kneeling remains a controversial action on the football field.

When Eminem kneeled during the halftime show during “Lose Yourself,” fans watching along on Twitter shared their responses.

Kaepernick has yet to publicly comment on the show. The only thing he’s posted on his personal Twitter and Instagram accounts today is the news that his Know Your Rights Camp organization just released a free guide with more than 80 pages of activities and resources to accompany the Colin in Black & White series on Netflix. But while Kaepernick has stayed mum, Know Your Rights Camp retweeted several posts celebrating Eminem’s set, once of which stated, “Super Bowl weekend reminder that Colin Kaepernick was right about everything.”

More like this
Linda Ronstadt’s “Long Long Time” Plays A Pivotal Role In The Last Of Us
By Brad Witter
Hilary Duff's Husband Matthew Koma Has Her Name Tattooed On His Butt
By Jake Viswanath and Stephanie Downs
The 2023 Super Bowl Commercials Feature A 'Breaking Bad' Reunion & Missy Elliott
By Alyssa Lapid
Andy Cohen Apologized To Larsa Pippen After A 'RHOM' Season 5 Reunion Dust-Up
By Brad Witter
Get Even More From Bustle — Sign Up For The Newsletter
From hair trends to relationship advice, our daily newsletter has everything you need to sound like a person who’s on TikTok, even if you aren’t.