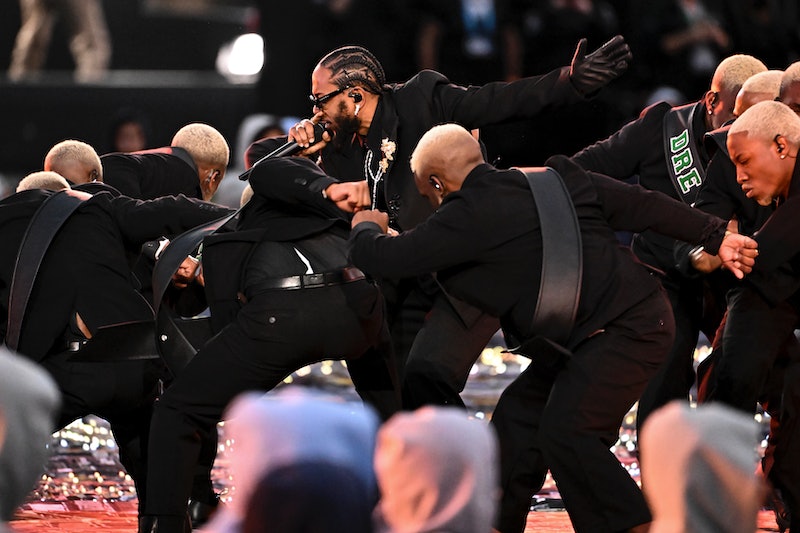 If Kendrick Lamar’s “Alright” sounded a little bit off during the 2022 Super Bowl Halftime Show, you’re not the only who noticed. While performing the 2015 track during the Feb. 13 show, Lamar omitted the line “We hate po-po.” Instead, he sang, “We hate,” waited a beat, and then continued on to the next verse, “Wanna kill us dead in the street fo sho.” This wasn’t the only word missing from the popular song, but other omissions were standard for a network broadcast.

Due to the camera angle, it’s hard to tell whether or not Lamar mouthed the line or left it out entirely. But he has skipped the lyric for certain performances before (more on that later), so it seems likely that was the case here too. Either way, many Twitter users felt the lyric’s absence was conspicuous, given its ties to the Black Lives Matter movement.

According to the New York Post, rumors swirled ahead of the big game that Dr. Dre was unhappy with attempts to control certain parts of his performance. Specifically, the paper cited a Puck report that claimed Dr. Dre felt “disgustingly censored” and that the NFL was worried about the lyric “still not loving police” in “Still D.R.E.” As you can see in the footage of the full halftime show (at 13:00), Dr. Dre ultimately included the line. But the missing “po-po” moment at 8:45 gave viewers plenty of pause.

This is not the first time “Alright” has been altered for a live performance. As reported by MTV, Lamar changed the “po-po” line (and, obviously, several expletives) when he sang the song at the White House in 2016. He also sang a slightly different version of the track at the 2016 Grammys. However, it’s still frustrating to see claims that the NFL pressured its performers into changing their work.