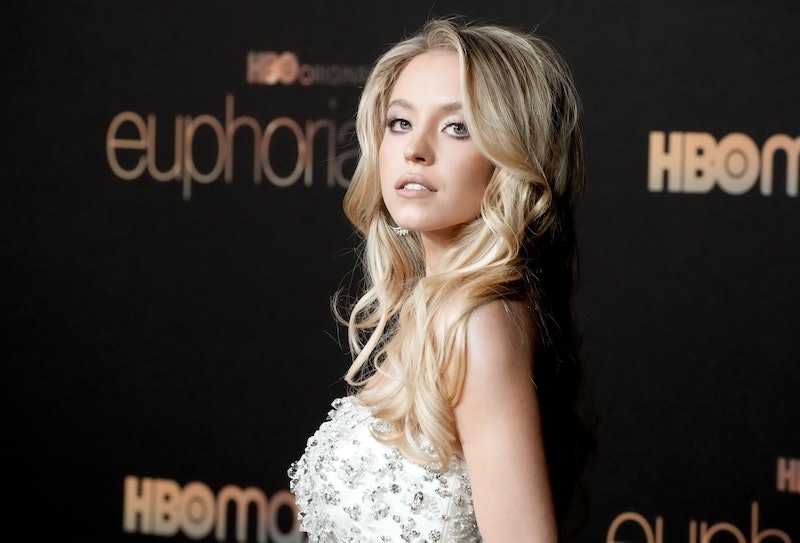 Euphoria is known for a lot of things — drugs, drama, and NSFW scenes. Sydney Sweeney, who plays Cassie on the hit HBO series, recently appeared on The Ellen Degeneres Show to discuss the success of Euphoria, her family’s reaction to her nude scenes, and her Cosmopolitan cover. “Every time [my family goes] to a store or the airport and they see my magazine, they cover the entire magazine racks with my cover, so you walk by and it’s just Sydney [on] Cosmo,” she said.

The 24-year-old star revealed that for the Euphoria Season 2 premiere she invited her parents, grandparents, aunts, and uncles. She admitted she “wasn’t thinking” when she invited her entire family to watch the steamy show on the “ginormous screen.” Degeneres jokingly replied, “You did that to yourself. What were you thinking inviting your grandparents. How are they with it?”

Sweeney responded, “They said I have the best tits in Hollywood.” Her grandma Velda, who was in the audience of The Ellen Degeneres Show live taping, waved and gave a thumbs-up in approval.

This isn’t the first time Sweeney wasn’t thinking straight about letting her family watch her NSFW scenes in Euphoria. In an interview with E!News, the Voyeurs star said she forgot to tell her dad about landing a role in Euphoria and what that entailed. “I did forget to tell my dad anything about Euphoria. I, for whatever reason, spaced the last 10 months when we filmed Season 1 and he sat to watch it with my grandparents,” she said. “They didn’t finish the first episode. Now, whenever something comes out, my dads like, ‘Can I watch it?’”

Sweeney has been open about her nude scenes on Euphoria and quick to defend herself against critics. She said there is “a stigma against actresses who get naked on screen. When a guy has a sex scene or shows his body, he still wins awards and gets praise. But the moment a girl does it, it’s completely different.” Though Sweeney has worked on projects in the past where producers refused to change certain parts of a script that made her feel “disgusting,” she said that Euphoria Director Sam Levinson has never “pushed” her to doing scenes she didn’t feel comfortable with.

Regardless of Euphoria, Sweeney remains close with her family. “I love to share this world with them, because it’s very different and not normal,” Sweeney said on Live With Kelly and Ryan in January. “I always grew up really close with my family. All my cousins and aunts and uncles and we all grew up in this small little area.” Sweeney took her grandma to the Balmain Fashion Show during Paris Fashion Week and made sure her “nana” got the full celebrity treatment. “I had her get her hair and makeup done and she got to sit front row. She looked so pretty. She’s never been to Europe before. It was an amazing memory.”

This article was originally published on April 4, 2022