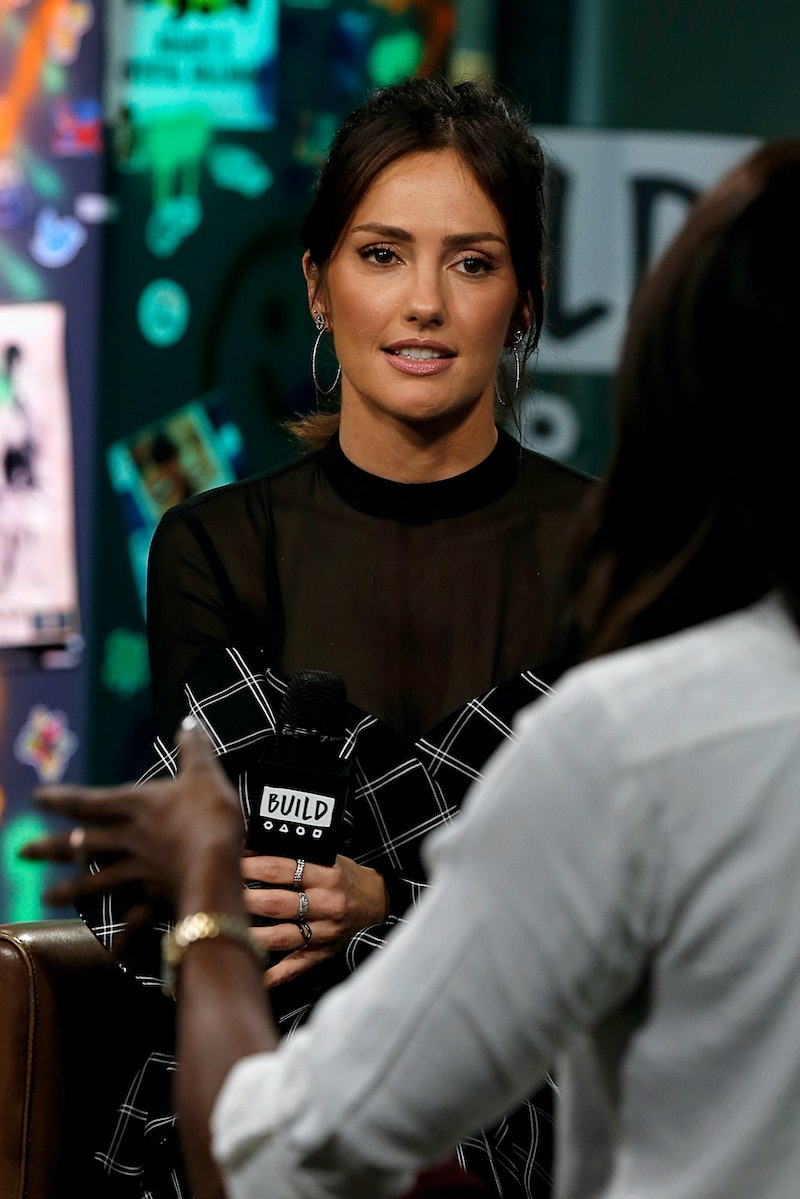 For a show about high school kids, there’s a lot of nudity in HBO Max’s Euphoria. Apparently, even more nudity was written into the script, but some actors were so uncomfortable with the material that they asked creator Sam Levinson to remove those scenes. Minka Kelly plays Maddy’s (Alexa Demie) babysitting boss and is one of the actors who asked the showrunner to let her keep her clothes on.

In an interview with Vanity Fair on Feb. 14, Kelly spoke about playing Samantha, the “older, wiser version” of Maddy that Levinson specifically wrote for Kelly, 41. Maddy already looks up to Samantha’s fabulous, rosé-sipping life — or at least the contents of her designer wardrobe. So when a friendship blooms between the two, Samantha becomes a de facto mentor to the high school student.

Samantha is first introduced in Season 2 when she asks Maddy to unzip her dress. Though there’s already a strange sensual undertone to the interaction (with the lingering eye contact and subtle touch), per Vanity Fair, that scene is actually “tamer than what was originally scripted.” Kelly told the outlet, “[Levinson] thought it would be more interesting if my dress fell to the ground.” She disagreed, saying, “That was my first day as a guest on this new show, and I just didn’t feel comfortable standing there naked.”

So she talked to Levinson and asked him to change it. “I said, ‘I’d love to do this scene, but I think we can keep my dress on,’” Kelly said, adding that Levinson OK-ed the change and “didn’t even hesitate.” “He shot a beautiful scene and got exactly what he wanted,” she said.

Kelly isn’t the first cast member to reveal they had to ask Levinson to tone down the nudity. Chloe Cherry, who plays Fezco’s new houseguest, Faye, also had a similar experience on her first day on the job. Dazed reported that in addition to being covered in blood and stuffed into a vent by co-star Tyler Chase, Cherry, 24, was also supposed to be nude in her first scene. Per the outlet, Cherry said, “Sam wanted to do the scene with me completely naked and Tyler was like, ‘That’s a lot,’ so they decided not to,” she said. Adding that she had “just met” Chase, who plays her on-screen boyfriend, Custer, she said, “It probably would’ve been more comfortable had we had a little more time to know each other.”

Cherry, an adult film star, was discovered by Levinson on Instagram. Of her casting, she told Nylon, “[Levinson] just thought I was funny.” After he “found” her, someone from the show’s team slid into her DMs and asked her to audition. In another interview with iD, Cherry recounted the moment she finally met Levinson, saying, “When I met Sam Levinson, he said, ‘I love watching your Instagram stories. I just had to audition you. I was really hoping that you would be good.’”

Martha Kelly, 53, who plays the drug dealer Laurie, also spoke about a “creepier” scene that she asked Levinson to cut. On Feb. 13, Kelly told Variety, “There is that scene where Rue is getting into the tub, and Laurie injects her with morphine — and in the script, it is even creepier, because Laurie is helping her undress and get in the tub, and it is approaching this gross pedophilia vibe.”

She even shared that she thought she couldn’t do the scene, so she approached Levinson. “I met with Sam and he was so lovely about it,” she told the outlet. Though she later “decided not to ask him to change anything,” Levinson told her they’d shoot the scene “slightly out of focus,” which appeased her worries.

Sydney Sweeney, 24, who arguably has the most nude scenes on the show as Cassie, was the first to allude to asking Levinson to cut naked scenes she deemed unnecessary. In an interview with the Independent on Jan. 20, the actor said, “There are moments where Cassie was supposed to be shirtless and I would tell Sam, ‘I don’t really think that’s necessary here.’” Similar to the other cast member’s stories, she was quick to point out that Levinson never pushed back, saying she “never felt like Sam has pushed it on me or was trying to get a nude scene into an HBO show. When I didn’t want to do it, he didn’t make me.”

She even praised the experience in comparison to previous shows where she didn’t feel like she “was able to speak up.” Sweeney told the outlet, “I’ve had experiences where I want to go home and scrub myself completely raw because I feel disgusting.” After the interview was published, fan concern for Sweeney poured in. To address them, she told Washington Post a month later, “I appreciate people being worried… but I’m totally fine on Euphoria.”

In an interview with Teen Vogue published March 14, Sweeney further clarified her comments regarding nudity on Euphoria. “I never asked him to cut any scenes,” she said, explaining the interview quotes “got twisted and turned and it became its own beast, and I was like, ‘Oh, my God.’”

The actor insisted her previous statements were meant to illustrate how receptive Levinson is to his cast’s concerns. “It was more how respectful Sam is and how incredible of a director he is, that he would never make me do something I didn’t feel comfortable with,” Sweeney detailed.

In fact, she feels nudity is “important” to Cassie’s character and experience. “There’s a purpose to what that character is going through. That’s the character. We all get naked in real life. We show this character’s life and what they’re going through,” she continued. “Cassie’s body is a different form of communication for her.”