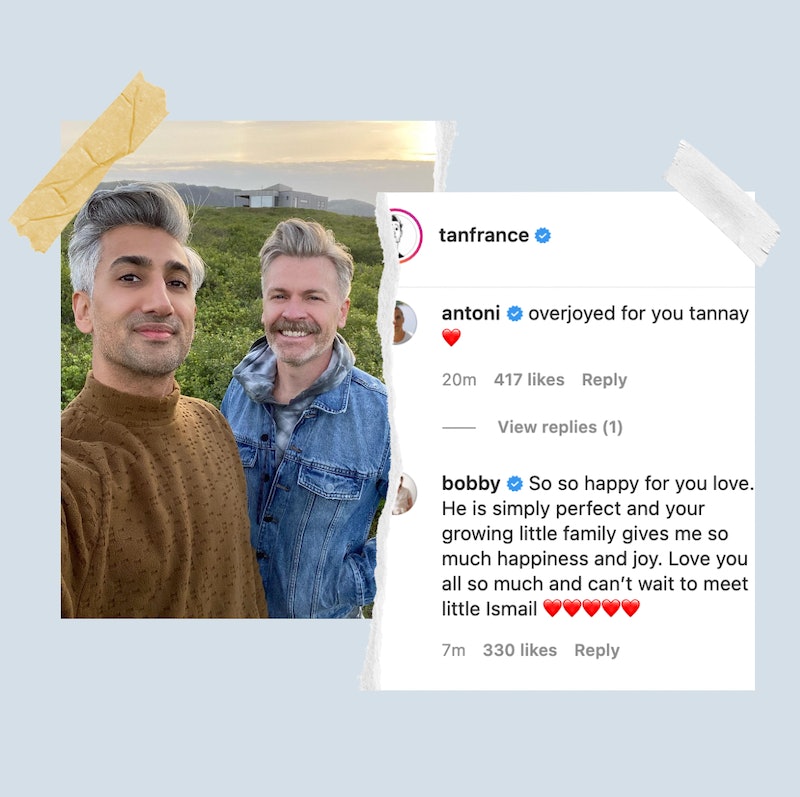 Tan France is a man of many titles. He’s a fashion expert on Queer Eye, a warmhearted yet critical judge opposite Alexa Chung on Next In Fashion, and a funny stylist to comedians in his web series Dressing Funny. Today, he revealed he’s recently taken on a new role: a father.

The 38-year-old style icon took to Instagram to announce that he and his longtime husband Rob France had welcomed their first child — Ismail France — via surrogacy in mid July but only now just brought their newborn son home from the hospital on Aug. 2. The adorable family portrait sees the couple beaming as Tan holds their son in his arms. The last time Bustle spoke with France, the Queer Eye star was filming the sixth season of the show in Austin and “just waiting for the baby to come.” In the caption, France revealed that the baby was born on July 10 — seven weeks earlier than the original due date. As a result, the newborn was required to stay in the Neonatal Intensive Care Unit for an additional three weeks before he was able to safely return home with his parents.

“Give our son a warm welcome,” France wrote. “Today, we finally got to bring him home. We love him so, so much. Like, fully obsessed.” He also took a moment to thank the surrogate who delivered their child, saying she was “doing great” after the labor that they “couldn’t be more grateful” to her for giving them “the greatest gift of our lives.”

This isn’t the first time France has dropped some major baby news on Instagram; he first revealed that he and Rob were expecting via a cheeky Instagram post in April. The photo shows Tan cradling his bare stomach with an ultrasound image of their child copy-and-pasted on top. “No, I’m not pregnant, despite this VERY realistic pic,” he wrote. “With the greatest gift/help of the most wonderful surrogate, Rob and I are lucky enough to be on our way to being parents, this summer.” He added that the idea of starting a family was one that both him and Rob had been wanting for “SOooo many years” prior to their announcement. “Our hearts are so full right now. I cannot wait to hold this baby, and to show him so much love,” he wrote.

Jonathan Van Ness was the first of his Fab Five Queer Eye co-stars to celebrate the news. “!!! Not to make everything about me but this is another secret I’ve successfully kept!!!” Van Ness wrote on their Instagram story. “We’re so happy for you & love your family so!!”

He was quickly joined in the festivities by fellow Queer Eye star Antoni Porowski, who commented on France’s post that he was “overjoyed” for the couple. Designer and co-star Bobby Berk commented next: “So so happy for you love. He is simply perfect and your growing little family gives me so much happiness and joy. Love you all so much and can’t wait to meet little Ismail.”

So what’s next for the family? In June, France told Bustle how he envisions their future to pan out in 15 or so years: “I see myself completely retired. I was meant to retire before Queer Eye and then I got this job and my retirement was over. So, I will be, hopefully, completely retired, a stay-at-home dad, hopefully vacationing regularly with my husband and children. It really is the dream. I wanted it so badly, and I got there. By 33, I had retired and we were going to start the surrogacy process and then literally less than five days later, just under five days later, I got a call saying, “Will you be on a show called Queer Eye?” If it wasn’t for me selling my companies, I wouldn’t have been available to do the show. So, it definitely was meant to be.”

More like this
Andy Cohen Apologized To Larsa Pippen After A 'RHOM' Season 5 Reunion Dust-Up
By Brad Witter
'Bachelorette' Vet Clare Crawley Unveiled 2 Special Wedding Day Accessories
By Stephanie Topacio Long
Hannah Ann Got Engaged 3 Years After 'The Bachelor' & The Proposal Was Dreamy
By Grace Wehniainen
Khloé Kardashian Writes Touching Instagram Tribute To Tristan Thompson’s Mother
By Alyssa Lapid
Get Even More From Bustle — Sign Up For The Newsletter
From hair trends to relationship advice, our daily newsletter has everything you need to sound like a person who’s on TikTok, even if you aren’t.