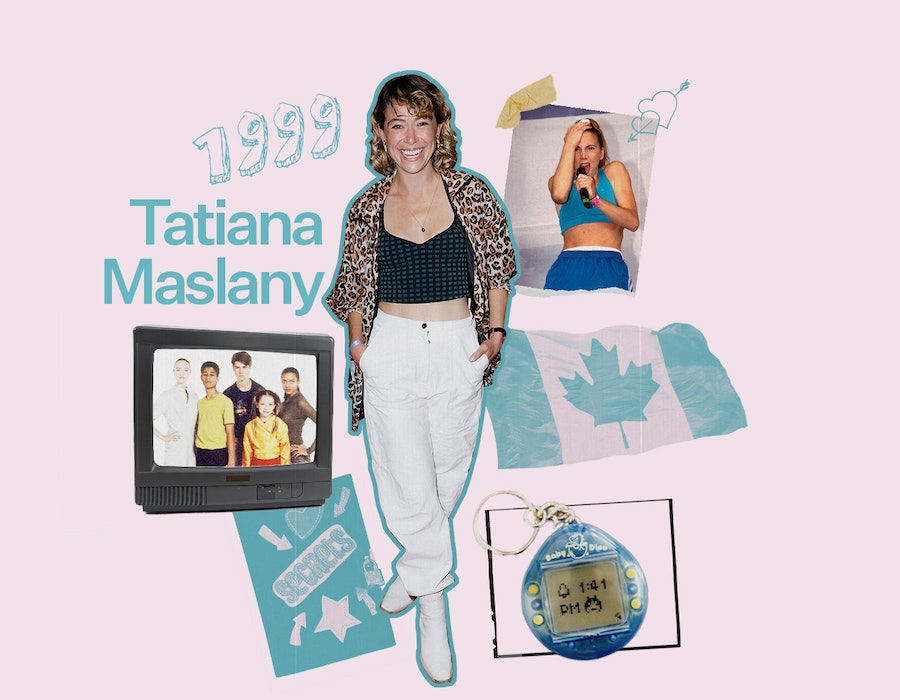 When Tatiana Maslany was 14, her biggest worries revolved around picking the right shirt or wondering if people thought she was a tomboy. “It's such a stressful thing when you're just trying to figure out your identity,” she tells Bustle. But navigating multiple identities is an essential part of being an actor, and for Maslany, it’s something she’s particularly known for: In 2013, she landed her breakthrough role — or roles, plural — in BBC America’s clone thriller, Orphan Black. Now, the 36-year-old actor is juggling dual identities once again in Marvel’s She-Hulk: Attorney at Law, where she plays lawyer Jennifer Walters, who turns into a Hulk after getting in a car accident with her cousin Bruce Banner, aka The Hulk (Mark Ruffalo), and absorbing some of his superhuman blood. Equal parts courtroom drama, superhero origin story, and rom-com, the Disney+ series charts Jen’s journey of self-acceptance as she learns what it means to take up space at work and in the world at large.

In some ways, Maslany thinks Jen’s transformation into She-Hulk mirrors how puberty is a time when young people start discovering new parts of their identity. “There's something about her sexuality when she's Jen — she doesn't totally own it, even though she's an incredibly sexual person,” she says. In one of the show’s scenes, Jen struggles with getting any matches on a Tinder-like dating app until she joins the platform as her green, bombshell alter ego. “When she’s She-Hulk, there's more of a command of that part of her identity,” Maslany says. “As much as she's still contending with the fact that at her core, she's Jen, there's something about the way she's perceived that allows her to embody that side of her differently.”

It surprised Maslany how her work in the show felt like a full-circle moment following her tomboyish style as a teen. “What was fun about [She-Hulk] was that she actually opened up a new channel to femininity for me that felt like had been dormant,” she says.

Here, Maslany opens up about growing up and acting in Canada, shopping in the boys section, and being obsessed with a Spice Girl.

Take me back to 1999 when you were 14. How were you feeling about your life then?

When I was 14, home for me was in Regina, Saskatchewan, which is in the prairie province in Canada. I was about to start a TV show for the first time. I was a regular on a TV show that was going to be filming in Winnipeg, Manitoba, which is like another small town in Canada, but I was just starting that part of my career. That felt very exciting and like I was getting to go away to summer camp in a lot of ways.

So at 14, were you already imagining this as your future?

I don't think I had any sense of the future at that time. It was more like a cool experience. I knew I loved acting. I knew it gave me something. And I got feedback from people about it. There was a sense of like, “You're good at this.” As a kid, you're like, “Okay, I'm going to do more of that.” That feedback is very energizing.

What made you want to hulk out at 14?

I was very emotional as a kid. That was probably where acting came into play for me and why it was such a fun channel for me to access. But yeah, you're prepubescent; you're going through all of it. Your body's changing, and for me, it didn't change for like 10 more years. I was 4-foot nothing for most of my life. But I would hulk out at the simplest little things, like not getting a Tamagotchi.

Did you ever get one?

I did, probably because I had such a temper tantrum about it. The Tamagotchi was green with yellow cracks.

Jennifer has to come to terms with this big physical transformation, in some ways similar to 14-year-olds. Did you feel comfortable in your own skin at the time?

I think I did. With certain friends, I remember trying on different identities, like trying to find out who I thought I was, and being very inspired by TV shows, people, and my peers. It was so much about how I dressed. I didn't want to be seen as girly. That was something I definitely was very resistant to and I probably had — what I've come to learn now — was an internalized misogyny toward everything that was feminine. So I presented very masculine and I really wanted to be seen as such.

I’d shop in the boys section at this highly discounted clothing store. You could buy a pair of pants for $8. I co-opted skater culture, and I would carry around a skateboard without actually being able to skate. And I had this little hat from a flea market or something. I've never seen anybody wear something like that. But it was like a gingham chef's hat. I remember going to a restaurant, and the waiter was like, “That's awesome. Where's that from?”

Do you still have the hat?

I don't. I haven't thought of that hat for like 20 years!

Were there any celebrities you had crushes on?

Sporty Spice was the big crush. I don't remember exactly when the Spice Girls movie came out, but I was obsessed with her. I wanted to date her and be her.

What couldn't you live without at 14?

I wrote in a diary every day and every night. I have like 200 diaries that I've written since I was a kid. But at that time, I remember being very obsessed with constantly documenting but also working through things.

Do you keep all of your diaries?

Oh, yeah, which is crazy because I don't know what I'll ever use them for. But sometimes I go back and read at random, and it just sucks me right back into a time in my life and makes me remember things that I would never have remembered otherwise. Like yesterday, things happened that I don't remember today, but if you put it on paper, it's a totally different thing. It's very transportive.

Do you find that it helps your craft?

Yeah, there are certain characters when I'm working on them — or I'm doing a film, TV show, or a play — that demand more writing than others. She-Hulk didn't necessarily ask for a lot of writing. When I was working on that character, it was more physical stuff.

What would your 14-year-old self think of She-Hulk?

I think she'd be so excited by her. She'd probably also be like, “Why isn't she more muscular?”

Was that something you wanted to see more of in She-Hulk?

I understand why people might want to see a woman whose body is meant to be this massively powerful thing in a different form from the conventional, “perfect” woman's body. But that conversation is why I also gravitated toward this part, because it prompts questions about why we all feel entitled to comment on women's bodies.

Is there any advice you would give your 14-year-old self now?

Not so much advice, but I'd love to just send a snapshot of what life is like now so that I wouldn't be so stressed out. Then at 14, I could be like, “Oh, cool. I make OK choices,” or, “I'm not totally lost.” Seeing where all of that work has come to is pretty cool.

More like this
On 'The Handmaid’s Tale,' Christine Ko Fights Back
By Gretchen Smail
The 'Andor' Timeline, Explained
By Gretchen Smail
At 28, Sharon Horgan Was Hoping To See Damon Albarn At The Pub
By Samantha Rollins
Louisa Harland’s New Show Is A Far Cry From Derry Girls
By Frances Stewart
Get Even More From Bustle — Sign Up For The Newsletter