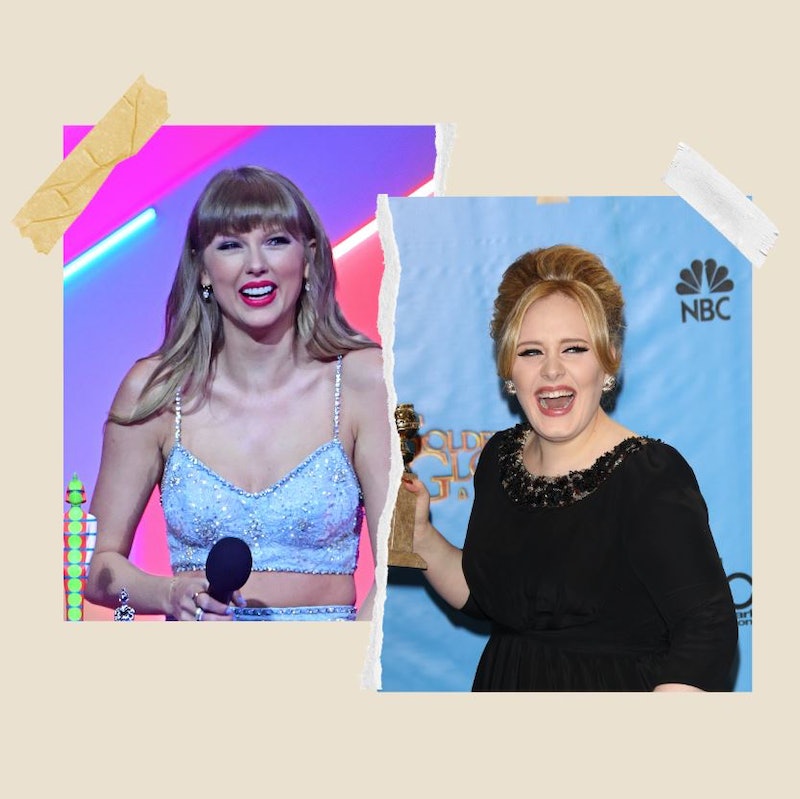 Fans who already had a pint of ice cream ready in anticipation of what could be the greatest breakup song of all time might be in for another heartbreak. After eagle-eyed fans spotted a new Taylor Swift and Adele song called “Broken Hearts” registered with the Society of European Stage Authors and Composers (SESAC), rumors quickly began circulating that the two powerhouse Grammy winners had a collaboration on the horizon. A source later told E! News, however, that “there is no truth” to the reports of the forthcoming track listing “Adele Laurie Blue Adkins” and “Taylor Alison Swift” as co-writers.

That’s not to say a potential duet is totally out of the question, though. Not only has Swift mastered the art of surprise, but she also has a new album on the way. On June 18, the “Willow” singer announced she’s re-recording her 2012 hit album Red, and her April release of Fearless (Taylor’s Version), did include six new “from the Vault” tracks, two of which were collaborations. When Swift, who’s famous for her Easter eggs, revealed the planned Nov. 19 release date for Red (Taylor’s Version), fans believed she may have even hinted at her and Adele’s reported “Broken Hearts” song.

“I’ve always said that the world is a different place for the heartbroken. It moves on a different axis, at a different speed. Time skips backwards and forwards fleetingly,” she wrote, in part, on Instagram. “The heartbroken might go through thousands of micro-emotions a day trying to figure out how to get through it without picking up the phone to hear that old familiar voice. In the land of heartbreak, moments of strength, independence, and devil-may-care rebellion are intricately woven together with grief, paralyzing vulnerability and hopelessness.”

Adele and Swift are certainly friendly, too. Following a June 2018 London Reputation tour stop that Adele attended, Swift posted an Instagram selfie with the “Someone Like You” singer. “I’m so grateful for these women, for the words they’ve written and the worlds they’ve created through their art,” she captioned the collage, which also include a shot with Harry Potter scribe J.K. Rowling. “So stoked to have you at the show in London.”

For her part, Adele has also expressed her admiration for Swift in the past. “I love her — how powerful she is,” the British singer said in a 2015 Time cover story. “We’ll get lumped together now because of it, but I think we would both feel the ability to say yes or no to things even if we weren’t successful.”

Adele, whose most recent release was in 2015, also has a new album in the works, and so “Broken Hearts,” if real, could even find a home there. While hosting Saturday Night Live in October 2020, she shared that her “album’s not finished,” though fans have since learned she’s previewed some new tracks for friends. “I’ve actually heard some tracks on it. Oh my God, it’s amazing — so amazing,” pal Alan Carr told Grazia UK in January. “That voice is like an old friend, because there are some people in the charts who sound a bit like Adele and then when you hear Adele’s voice, you go, ‘Oh, no, there’s only one.’”

Meanwhile, Swifties didn’t have to wait until November for new music. On July 2, Swift dropped a song called “Renegade,” in collaboration with Big Red Machine, the side project of The National’s Aaron Dessner and Bon Iver’s Justin Vernon. Dessner was one of Swift’s key collaborators on her 2020 albums, Folklore and Evermore. (“Renegade” will appear on the indie-rock duo’s sophomore How Long Do You Think It’s Going To Last? album (out Aug. 27), however not the Red re-recording.)

Regardless of whether “Broken Hearts” ever sees the light of day, fans can only hope, for now.