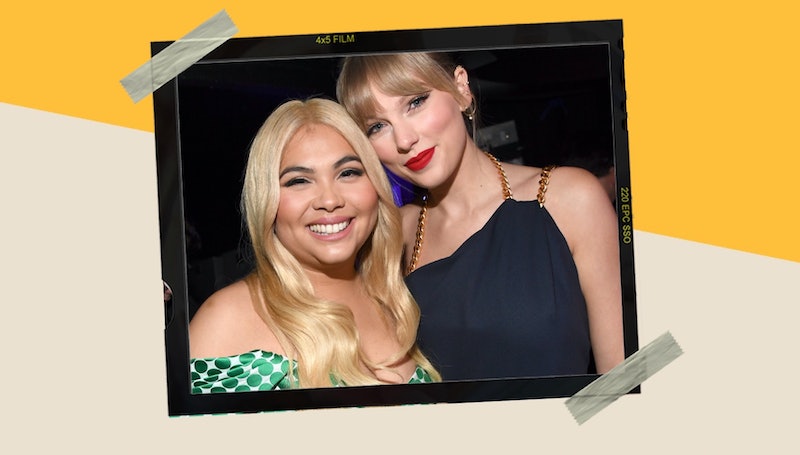 Days after Hayley Kiyoko and Becca Tilley confirmed their four-year relationship — with the help of the “For the Girls” music video on May 20 — the Bachelor alum shared more about the couple’s relationship story. During the May 23 episode of Scrubbing In with Becca Tilley & Tanya Rad, Tilley revealed that one very famous musician played a role in their early days of dating. Hint: To borrow a lyric from that musician, I think she knows (or knew) about the couple way before anyone else. “I think like the first person who found out, outside of my family and friends, in a weird way, was Taylor Swift,” Tilley said. “Because Hayley went on stage with her in Boston, and after the show, I got to meet Taylor in her dressing room ... it felt like talking to a friend.”

Tilley is referring to a moment on Swift’s Reputation tour in which Swift and Kiyoko performed “Curious” together on stage in July 2018. The stop would’ve been early in Tilley and Kiyoko’s relationship, which Tilley revealed on the podcast was largely long-distance during the first year. Though Tilley said Swift probably didn’t recognize her, “she was great” during the conversation.

Now, in a sweet full-circle moment, Tilley said she’s relating hardcore to two Swift songs from 1989: “Clean” and “Out of the Woods.” The second song, especially, resonated with Tilley’s first weekend of being in a public relationship with Kiyoko. “That whole song like, really encompasses me, my experience, and my relationship,” she said on Scrubbing In.

Swift has been vocal in her support for Kiyoko over the years. In 2018, before the Boston tour stop, Swift defended Kiyoko after the “demons” singer made a comment calling out a double standard in music. “I’ve had several music industry execs say ‘You’re doing another music video about girls?’ ... Taylor Swift sings about men in every single song and video, and no one complains,” Kiyoko told Refinery29. Though some of her fans criticized Kiyoko, Swift supported her on Tumblr. “We should applaud artists who are brave enough to tell their honest romantic narrative through their art, and the fact is that I’ve never encountered homophobia and she has,” she wrote at the time. “It’s her right to call out anyone who has double standards about gay vs straight love interests.”