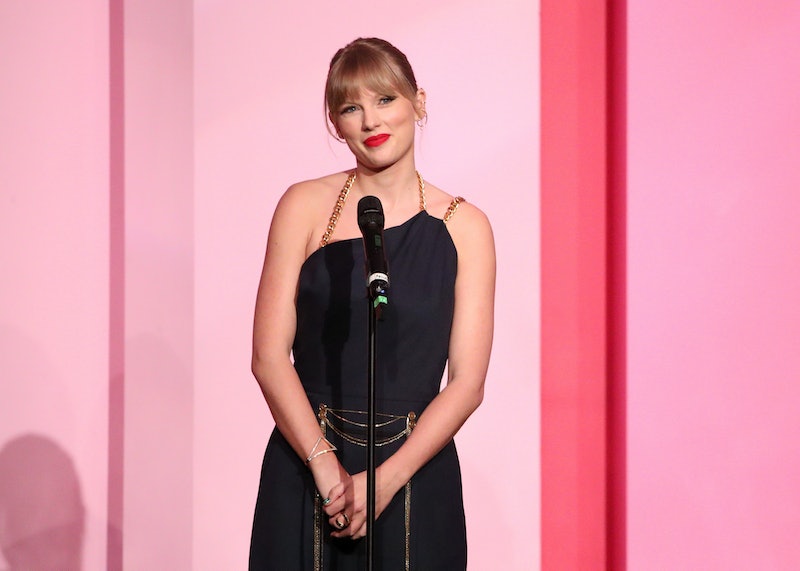 Don't tell Taylor Swift that she needs to calm down — because when .it comes to calling out the double standards of the music industry, she's just getting started. On Thursday, Dec. 12, at Billboard's annual Women in Music celebration, Taylor Swift called out Scooter Braun and "toxic male privilege" during her powerful "Woman of the Decade" acceptance speech. Over the course of her fifteen-minute speech, Swift touched on everything from the way that female musicians and creators are held to a higher standard than their male counterparts to, of course, her ongoing battle with Scooter Braun over her masters.

While speaking about the way the music industry as a whole has changed over the past ten years, Swift called out private equity firms "buying up our music as if it's real estate," saying she considers it one of the most "harmful" shifts of the decade. "This just happened to me without my approval, consultation or consent," Swift said. "After I was denied the chance to purchase my music outright, my entire catalog was sold to Scooter Braun’s Ithaca Holdings in a deal that I'm told was funded by the Soros Family, 23 Capital, and the Carlyle Group."

The singer also claimed that "none of these investors have ever bothered to contact me or my team directly," and that Braun himself "never contacted me or my team to discuss it prior to the sale or even when it was announced." (In November, Braun wrote in an open letter on Instagram that he had reached out to Swift and her team multiple times to find a "resolution," but had not received any response, though it was unclear if he did so before Swift's dissatisfaction with the sale became public.)

The singer also references the roster of A-list musicians who have defended Braun in the wake of her original Tumblr post accusing him of "bullying" her, by calling out the "toxic male privilege" that allows men in the music industry to get away with what she feels is unacceptable behavior.

"Let me just say that the definition of the toxic male privilege in our industry is people saying, 'But he's always been nice to me,' when I'm raising valid concerns about artists and their rights to own their music," Swift said. "And of course he's nice to you. If you're in this room, you have something he needs." However, the singer did note that "the most amazing thing" that happened as a result of her decision to make the fight for her masters public was how women in the industry supported her.

Looking ahead, Swift said that she's heading into the new decade with more confidence than ever before: "As for me, lately I've been focusing less on doing what they say I can't do and more on doing whatever the hell I want."