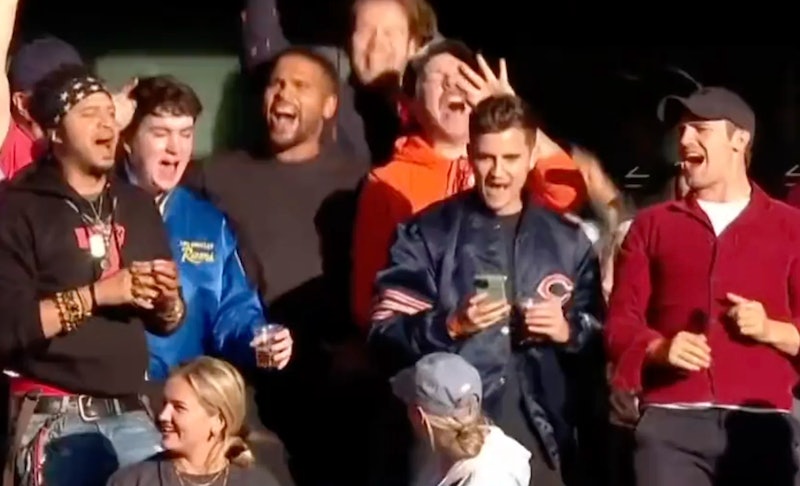 The NFL game between the Minnesota Vikings and the New Orleans Saints on Oct. 2 saw the U.S. rivals go head-to-head at London’s Tottenham Hotspur Stadium. During what the BBC described as “the most entertaining NFL game played in London to date,” the Vikings walked away victorious, securing a 28-25 defeat. Although, for many fans watching at home, the Ted Lasso cast singing along to “Sweet Caroline” was the true highlight of the match.

As it turns out, the NFL showdown was quite the star-studded event, with the England and Tottenham Hotspur striker Harry Kane carrying out the traditional pre-game coin flip. Watching on from the stands was the cast of the hit comedy-drama, which centres on an American college football coach who is hired to oversee an English soccer team. As the track “Sweet Caroline” blared throughout the 62,000-strong stadium, Ted Lasso stars including Jason Sudeikis, Cristo Fernandez, Kola Bokinni, Phil Dunster, Moe Jeudy-Lamour, and Charlie Hiscock, were spotted singing along to the Neil Diamond classic.

Sitting alongside the show’s cast were the U.S. Women’s National Team midfielder Lindsey Horan, and the Arsenal Women’s player Leah Williamson, who appeared to be equally as enthusiastic about the stadium singalong.

Fans of the Emmy award-winning series were quick to spot the fictional squad and took to social media to express their delight. “This cast always seems so fun. Love this,” wrote one fan on Twitter. “Okay, the cast of Ted Lasso awkwardly trying to sing ‘Sweet Caroline’ was adorable,” one user added, while another fan joked, “The Ted Lasso cast singing ‘Sweet Caroline’? Consider my serotonin boosted.”

Meanwhile, on the pitch, the Minnesota Vikings player Adam Thielen showed his love for the hit comedy by donning a pair Ted Lasso-themed trainers throughout the game.