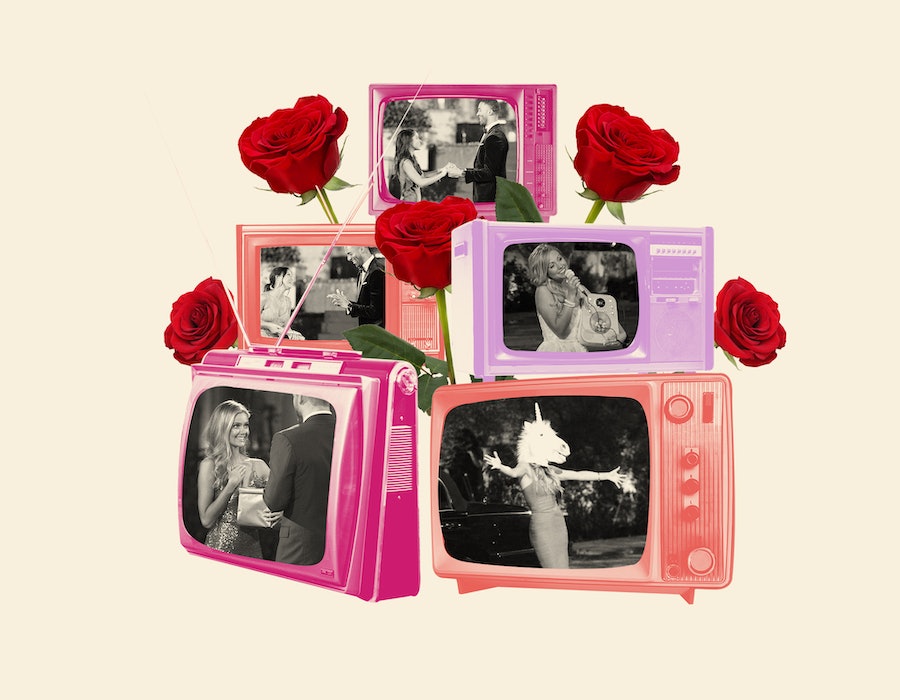 The Limo Exit has served as The Bachelor’s formal declaration of commencement every season all the way back to the game’s premiere on March, 25, 2002, when an episode of The Bachelor was just an hour long and each of the players’ Limo Exits were little more than quick hellos said through nervous smiles. But now, after nineteen years and twenty-five seasons of steadily growing fan engagement, the game’s standard broadcasts have doubled in time. As a result, every element of the game has evolved into a more elaborate and intricate version of itself including Limo Exits, which, in some cases, have even transcended the use of a limousine altogether.

Since the Paradise Era (which began in Season 19—Chris Soules), players have arrived in sports cars and police cars, ridden in on horses or other beasts of burden, and even been delivered zipped up tight inside of a piece of luggage waiting for the Bachelor’s benevolent hand to release them from their self-inflicted prison of contortion. All of these strategies were efforts to accomplish the only true goal of the Limo Exit round — making a lasting impression.

Once you’re inside the Mansion your autonomy immediately gets stripped by the Producers and you have no control over your setting or circumstance. So your Limo Exit will be the last part of the game over which you have complete control. You have to treat it as much more than just the first time you’re meeting the Bachelor — it’s also the first and only moment the viewers are meeting you.

Over the course of twenty-five seasons there have been over six hundred Limo Exits and we watched every single one of them. To the untrained eye, the sheer volume can easily be misunderstood as a daunting variety of styles and strategies to choose from. But in reality we found that there are only eight types of Limo Exits.

The Grand Entrance (or Grandy)

This is the Cadillac of Limo Exits. Nothing demands attention and respect like the brazen ostentation and excessive spectacle of a Grandy. It requires you to discard the comfortable conformity of a limousine ride in order to make a strong, immediate impression on both the Bachelor and the other players alike with a bold entry in a luxury automobile or a law enforcement vehicle, accompanied by a marching band, or with some other nontraditional means of entry. Due to the elaborate preproduction associated with the Grandy, the Producers only allow for a handful each season.

The Trick-Or-Treat (or TOT)

Halloween is widely understood to be the only twenty-four-hour period in which it is acceptable to don masks, regalia, costumes, and uniforms that would otherwise be disruptive to the regular flow of civilized public life. But for a lucky few, Night One offers an additional night when flaunting disguises both comedic and horrifying is more than permissible. The TOT requires you to exit the limo in some form of costume, full or partial. The initial draw of a TOT is obvious, but it is important to keep in mind that while emerging from the limo in butterfly wings or a wizard robe might elicit an initial chuckle from the Bachelor or generate a week’s worth of memes, it renders you statistically locked out of Ring contention. It’s true. The TOT has never produced a single Ring Winner.

This verbal greeting in a non-English language allows you to display your fluency in one of the many exotic tongues of the world or simply your ability to memorize a short phrase in a language other than English. Either way, the Aloha is short and sweet and quickly reveals something about your persona to the Bachelor — a possible ethnic heritage or academic linguistic pursuit or even a sense of humor depending on the phrase and its usage.

Very often, the Bachelor expresses pleasant surprise when he hears an Aloha and might ask you to teach him how to make the magical sounds coming out of your mouth. In this way the Aloha serves the double function of impressing the Bachelor with a display of perceived intellect as well as generating an anticipated mini-date activity of a language lesson later that night when you’re granted 1O1 time with him. Overall, the Aloha grants you a 65.21 percent chance of making it through Night One and the languages that tend to have the most favorable impact are Eastern European languages like Russian and Croatian.

The Stand-Up (or Standy)

If you’re ready to put your entertainer skills on display, you might consider exiting the Limo with a Stand-Up, which requires you to deliver a solo performance upon meeting the Bachelor. The performance is usually an attempt at a comedic pre-scripted one-liner, but not always. Jokeless Stand-Ups include songs, dances, athletic flourishes, and monologues. The Stand-Up lets you show the Bachelor that you have a sense of humor while at the same time you give the audience some material to make memes.

The Santa Claus (or Kringle)

Despite the incredible diversity of preference that exists in our species, there is not one among us who doesn’t light up with excitement at the prospect of receiving a gift. This intrinsic human delight is what the Kringle attempts to exploit. Whether the gift is small or large, wrapped, hidden behind the back, or proudly carried with two hands in full view, all that is required to execute a standard Kringle is a gift. Nothing more.

The array of possible gifts is as big as your imagination. Small baubles and trinkets that can be easily tucked away inside the Bachelor’s coat pocket work well to avoid the gift being discarded or handed over to Producers for “safekeeping.”

The It Takes Two

The Producers are tucked safely away inside the control truck watching events as they unfold on an array of screens, the host/s is/are relaxing in a green room until they’re summoned to initiate the next round of the game and even the Bachelor himself is rendered impotent, made to stand at the entrance of the Mansion and play the role of inert greeter to each of the players as they enter. It is at this moment that you can prod the Bachelor into action, forcing him to become a willing participant in any number of pre-planned mini-activities or run the risk of seeming uptight or, even worse, afraid to fully give in to the process.

Whether it’s coercing the Bachelor into becoming an awkward dance partner, a blindfolded taste tester, or an impromptu student of the Arkansas pig call, all you need to do to pull off a successful It Takes Two is engage the Bachelor in a brief activity that requires two people. These activities can range from comedic to overtly romantic in nature and everything in between.

The rarest and most exotic of all Limo Exit strategies is beyond doubt the Sidecar. Only a handful have ever been attempted — and for good reason. Not only does this strategy require you to do some detailed planning, including getting assistance from the Producers, but also the Sidecar requires the active involvement of a third party from outside the game who comes in with you to greet the Bachelor.

This other participant could be anyone from a moderately well-known singer lending their crooning skills to create a soundtrack for your entrance to a family member you bring in to show how important familial bonds are to you. Whoever you bring, it’s important to remember that a Sidecar has just as much chance of ending in disaster as it does of succeeding.

The Bland Entrance (or Blandy)

The Blandy is the easiest of all Limo Exits and well over half of all players do it. A Bland Entrance asks very little of you, only that you don elegant cocktail attire and deliver a pleasant formal greeting to the Bachelor with no attempt at humor or other conversational flourishes. Your physical engagement with the Bachelor can land anywhere in the range of handshake to brief hug and kiss on the cheek, stopping short of mouth kissing (open or closed). Both single and double hand holds are permitted during the introduction, which should include only your name, enthusiasm for the person selected as the Bachelor, and an assurance that you are looking forward to talking more inside the Mansion.

A Blandy’s strength, if it has any at all, lies in its simplicity. You ground your identity in confidence and sincerity, conveying that you don’t need the gimmick of a Grandy or the spectacle of a TOT to show the Bachelor that you are there 4TRR (For the Right Reasons).

At a 69 percent Round Survival Rate the Blandy does boast the highest likelihood of safety of any Limo Exit type, but you have to remember that’s due largely to the sheer volume of Blandies performed. There is no strong reason to perform a Blandy when all other options are available, but be warned — a purveyor of the Blandy is never to be underestimated, because what they may lack in initial panache or razzle-dazzle might be more than made up for with late- round strategies.

No matter whether your Limo Exit is stunning or mundane, exotic or routine, dazzling or forgettable, a success or unmitigated disaster, once you’ve said your hello to the Bachelor, you are granted entry into one of the most hallowed buildings in the entirety of the sporting world — the Mansion.

'How To Win The Bachelor: The Secret to Finding Love and Fame on America's Favorite Reality Show' by Chad Kultgen and Lizzy Pace
Simon and Schuster

Copyright © 2022 by Chad Kultgen and Lizzy Pace. From the upcoming book HOW TO WIN THE BACHELOR: THE SECRET TO FINDING LOVE AND FAME ON AMERICA’S FAVORITE REALITY SHOW, published by Gallery Books, a Division of Simon & Schuster, Inc. This chapter has been edited for length.

More like this
This 'Bachelor' Contestant Had The Best Reaction To Wearing The Same Dress As Another Woman
By Grace Wehniainen
A Guide To All Of Zach Shallcross' 'Bachelor' Filming Locations
By Brad Witter
Brooklyn From 'The Bachelor' May Have Accidentally Predicted Her Time On The Show On IG
By Grace Wehniainen
All The Clues Zach & Christina Are Together After 'The Bachelor'
By Grace Wehniainen
Get Even More From Bustle — Sign Up For The Newsletter
From hair trends to relationship advice, our daily newsletter has everything you need to sound like a person who’s on TikTok, even if you aren’t.