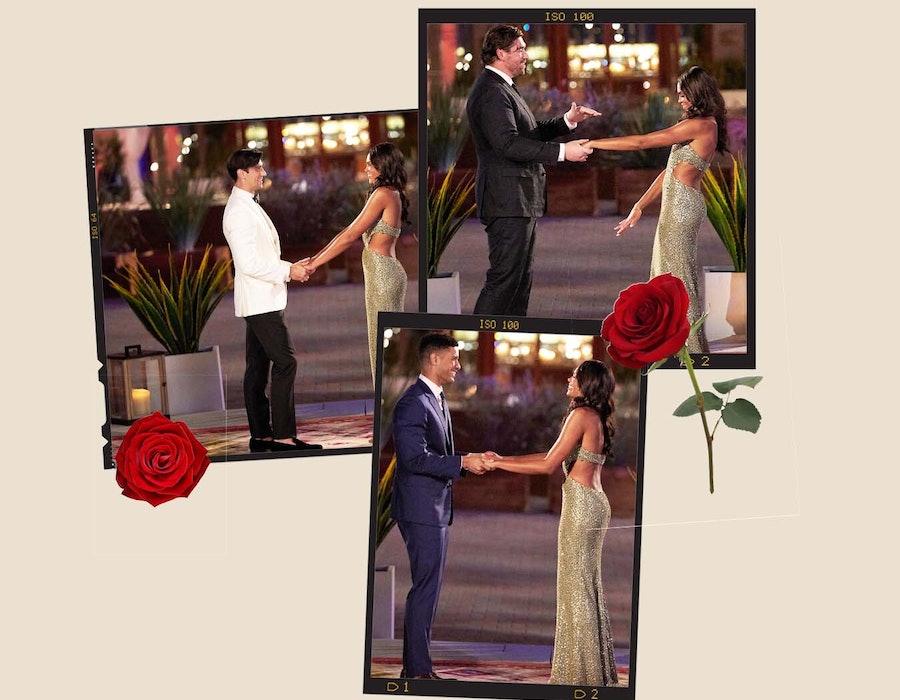 Imagine you've spent weeks preparing for a big opportunity away from home. You've bought new clothes, put a hold on your mail, arranged for someone to take care of your cat. You spend days alone in a hotel room planning exactly what you're going to say and do when you get your big shot. And then, in a matter of hours, it's all over. That's the reality for Bachelor Nation stars who get eliminated on the first night. But even if you're in the lucky set who gets to continue on for another week, that first night of a Bachelor or Bachelorette season is beyond draining, according to 10 former contestants who spoke with Bustle.

Fans watching the premiere episode may get glimpses of what makes that first night so stressful — contestants are getting used to being filmed, they're nervous, the atmosphere is hectic and intimidating, and they might have downed an extra cocktail or two. But what actually happens on night one is far more intense than what you see on TV and goes on for so much longer than the two-hour episode would have you believe. And, when you factor in all the prep time — filling out an application, doing multiple interviews, signing contracts, packing, flying to L.A., and more — contestants have already dedicated so much time to the show before they even step out of the limo that it's understandable that being immediately sent home would elicit tears of frustration. Here's what it's really like on night one.

The Limo Exit Is Beyond Nerve-Wracking

Caila Quinn, from Ben Higgins' Bachelor season, felt so out of place walking out of the limo that she compares herself to an astronaut. "The limo ride up to the Bachelor Mansion might have been the most terrifying thing I've ever done in my life," she says. "Walking out of the limo is like trying to walk on the moon for the first time. You don't know want to expect and are secretly holding your breath."

It isn't just scary for the ladies, though. Ben Zorn, from Kaitlyn Bristowe's Bachelorette season, agrees that "night one can be brutal." After getting out of the limo and blanking on everything he had planned to do, Zorn says he was sure he would be a night one casualty. "You look around and you see a ton of good-looking, well dressed guys and you start to think, 'She’s definitely not picking me.' ... I distinctly remember walking in the door after saying hi to [double Bachelorettes Bristowe and Britt Nilsson] and [telling] the producer, 'Well I bombed it, I’m going home.'" (He actually lasted until the final nine contestants.)

Evan Bass, from JoJo Fletcher's Bachelorette season, calls the fist night "disorienting, exhausting, and enlightening," because he learned a lot about how he handles stress in a short amount of time. But, he cautions, "No matter what anyone tells you, you can never prepare for the first night. There's no good advice for getting through it."

Even the most-self assured contestants struggled with the beginning of the show. Daniel Maguire, also from Fletcher's season, considers himself pretty confident, but even he balked at the first night. "It's still kind of nerve wracking," he admits. "I remember the guys in the limousine were just so nervous, like almost like to the point of puking."

Getting Time With The Lead Is Almost Impossible

Once you make it out of the limo and into the house comes the near-impossible task of trying to impress the Bachelor or Bachelorette so they remember you enough to let you stay. "It was like a dream, or a nightmare," says Jaimi King, who appeared on Nick Viall’s Bachelor season. "It started out amazing — magical, like Disneyland — and then time passed at an alarming rate and I didn’t get to speak to Nick at all ... the Bachelor has to do interviews throughout the night that cut into your time [so] you have to go and grab him."

Several contestants voiced similar frustrations. "One thing fans don't understand is how little time you get with the lead," Quinn says. "It can be as short as 30 seconds or as long as three minutes... basically until a producer nudges another girl to cut off your time. This is why the girls are normally so nervous and are panicking to talk to him — you might miss your chance."

It seems that 30 seconds is not an understatement of time. Olivia Caridi, also of Higgins' season, recalls "being so nervous ... to get time with Ben." She says, "It was a massive rush to find those 30 seconds to talk to him."

It does open one’s eyes to why contestants get so angry when someone speaks to the lead more than once in a single night. With so many people and so little time, going back for seconds could be considered bad form.

Even though contestants' time with the lead is comically short, the night is excruciatingly long. Fans see a two-hour version of what is very often a 10-12 hour night. "It’s awful and never ending, often going until sunrise even though the evening starts at like [7 p.m.]," Kupah James, from Bristowe's season, says. "My hat goes off to the thousands of women who have stood in heels for as long as that damn ceremony is." He claims that the rose ceremony is far from a continuous shot, with portions being filmed "over and over and over" with "no food, breaks, [or] chatting" for contestants.

Quinn adds, "You basically do everything in your power not to fall over from exhaustion." And, Wells Adams, from Fletcher's Bachelorette season, says filming went on so long that he jokes he "got drunk, sobered up, and got drunk over and over and over and over again."

Now, imagine all that times two. That was the reality for Zorn, who starred on the season with two Bachelorettes. (At the end of the premiere, the men chose which Bachelorette — Nilsson or Bristowe — would stay on for filming. Bristowe ultimately won out.) "Because we had two Bachelorettes, filming took two days," he says. "We shot all the intros night one and then shot all the conversations the next night. All our suits had to get dry cleaned and we all had to pretend like it was the same night." He recalls both nights ending at 6:00 a.m. and 7:30 a.m. respectively.

Filming doesn't begin until it's dark out for dramatic effect, and it continues all night, which is why eliminated contestants are very often seen leaving the mansion when it's already daylight the following day. "I was positive I wouldn’t last the night," Bass, from Fletcher's season, says. "But the elation of hearing my name called as the sun was rising and the birds were chirping is one of the most incredible feelings I’ve ever felt."

The Alcohol Is Flowing

One way to pass the excruciatingly long filming time and calm the nerves? Alcohol. Maguire makes it clear that producers never pressure contestants to drink, but it is there in unlimited quantities — so many contestants choose to imbibe... a lot. "We had a couple drinks in the limousine," he says. "We start drinking around 7 or 8 p.m. and then there’s nothing to do except hang out with these 25 guys until they start doing the rose ceremony, maybe around 3 or 4 a.m."

He continues, "There’s nothing else to do, you get bored out of your mind, you’re not gonna go to sleep, so the only thing to do is drink. And there’s alcohol everywhere ... [it's] just a party, basically." Maguire admits he drank more than most of his fellow contestants and says the ones who didn't were "just standing there and being super awkward." His attitude was to "have fun and make a memory out of it" in case he got sent home — so partaking in the booze was a part of that for him.

Even contestants who may not intend to go all out on the alcohol do find it to be a big part of the first night. "You’re standing around waiting for your turn to talk to the girl and at the same time you’re also stressed so you’re drinking alcohol," Zorn says. "[But] you’re also trying to stay awake so you start drinking coffee on top of that." He says if you look closely towards the end of the night, you can catch coffee mugs sitting out from contestants trying to sober up or stay awake.

If you're not one of the lucky ones who makes it through that exhausting first rose ceremony, you'll be heading out of the mansion in the early hours of the morning totally drained and feeling rejected. Bri Amaranthus, from Arie Luyendyk Jr.'s Bachelor season, tells Bustle that the experience was extremely disappointing. After all, "You’re so excited, you’ve packed for months, you haven’t talked to your friends and family for a really long time, you’re feeling a little isolated, and you’re so excited to meet this guy that you kind of left your normal life for."

Unfortunately, Amaranthus didn’t get enough time to make an impact on night one. "It was just kind of a missed opportunity,” she says, though she admits she didn’t feel they connected. "I don’t really blame him for sending me home, because he had spent a lot more time with other women that first night ... whereas he only spent 30 seconds with me or a minute or whatever it was. It’d be hard to know in that short amount of time that he would want to keep me or not."

While she doesn't blame him for his choice, she was upset to be leaving so soon. "Getting eliminated the first night, it’s kind of hard because there is this rejection that you feel," she admits.

With 12 hours of content condensed into a two-hour episode, Breanne Rice, from Higgins' season, says the first episode is more of a "highlight reel" than a play-by-play. But at least some of what ends up on the cutting room floor won’t be missed. "Trying to make small talk on camera for the first time is so much lamer than having to do it without cameras," Adams says. "You really have to seem interested in the dumbest stories. You also don't have a friend to save you from the mind-numbing banter or a cell phone to fake an emergency."

Still, friendships do form. Rice and Amaranthus, who both were eliminated on night one of their respective seasons, say that lifelong Bachelor Nation friendships blossom pretty quickly. "I’m still friends with girls from my season," Rice says. Amaranthus, who helped found the Rosé Girls — a group made up of contestants from Luyendyk's season who were eliminated on night one — adds, "I was really uplifted by the women that I got sent home with, because we were all in it together and we were all trying to help each other through that heartbreak and help each other through that disappointment."

On the bright side, nothing bonds people for life better than an extraordinary experience.

This article was originally published on May 28, 2018