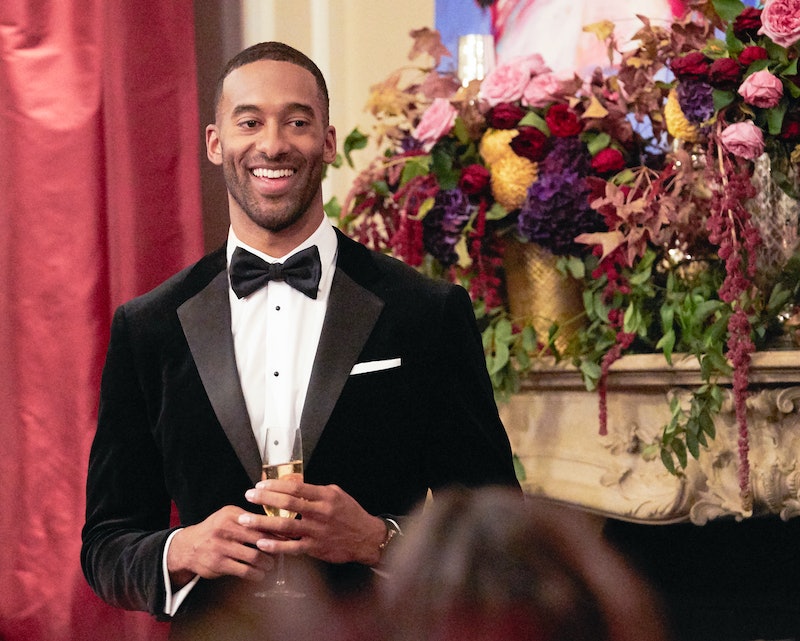 Being the Bachelor isn't easy, and now that Matt James has begun his journey, he can attest to the difficulties that arise while trying to find love on national TV. During a recent appearance on The Bachelor Party podcast, Matt admitted that he had to rely on host Chris Harrison's "tough love" to help get him through some rough moments and that he never quite felt comfortable while filming.

"Every time you think that, Chris pops up with a whole [new twist]," the 29-year-old commercial real estate broker said on the podcast's Jan. 7 episode, referring to Harrison's tendency to throw surprises at the cast at any moment. "It's more like a plot twist," Matt added. "Like, 'Well this is going well, let's do this' and I'm just like, 'Dang, I thought this was going well.'"

Despite the longtime host's habit of switching things up when Matt and his contestants least expect it, the show's new lead has come to appreciate Chris not just as a host and producer, but as a confidante. "Every time I talked to Chris, I took something away from him," he told podcast host Juliet Litman. In particular, Matt revealed that there was one moment where Chris sat down with him to give him some words of wisdom that he needed to hear before making a big decision. "That time specifically was just reiterating something that you heard your whole life," he recalled. "And that's 'you can't please everybody and you can't speak for everybody.'"

Matt continued, "Him saying that was what I needed to hear in that moment because I was putting a lot of pressure on myself." However, despite Chris' support, Matt explained that most of the time, the host was there to give him a firm push whenever it was needed. "He laid down the hammer a few times and that's the type of relationship we have," the Bachelor explained. "He reigned me back in and there was a lot of tough love."

The host himself teased their "tough love"-based relationship back in November when he revealed that Matt had to go through a Bachelor "crash course" while filming since he's a newcomer to the franchise. "There are some wonderful things to the naïveté and innocence to just coming in," he told Us Weekly at the time. "He never came up to the mansion before, he never went to a rose ceremony — he doesn't even know how to get a rose or give a rose," Chris said. "We really had to walk him through and teach him; it was Bachelor 101. And it was trial by fire."

In addition to guiding him through rose ceremonies and one-on-one dates, Chris explained that he was also there to help support Matt navigate the emotional roller coaster of falling in love on national TV. "It is an extraordinary circumstance and a range of emotions, and I told him, 'You're going to feel it all. There will be moments where you want to punch me in the face and you're going to be crying and upset,'" Chris said. "There were just these moments — the show strips you down. It takes you on this emotional ride that most people don't understand until you're a part of it."

Considering the preview for Matt's season included five new women arriving half-way through, the unexpected return of a former contestant, fights, and lots of tears, it seems like his journey to find love will indeed feature plenty of twists and turns.