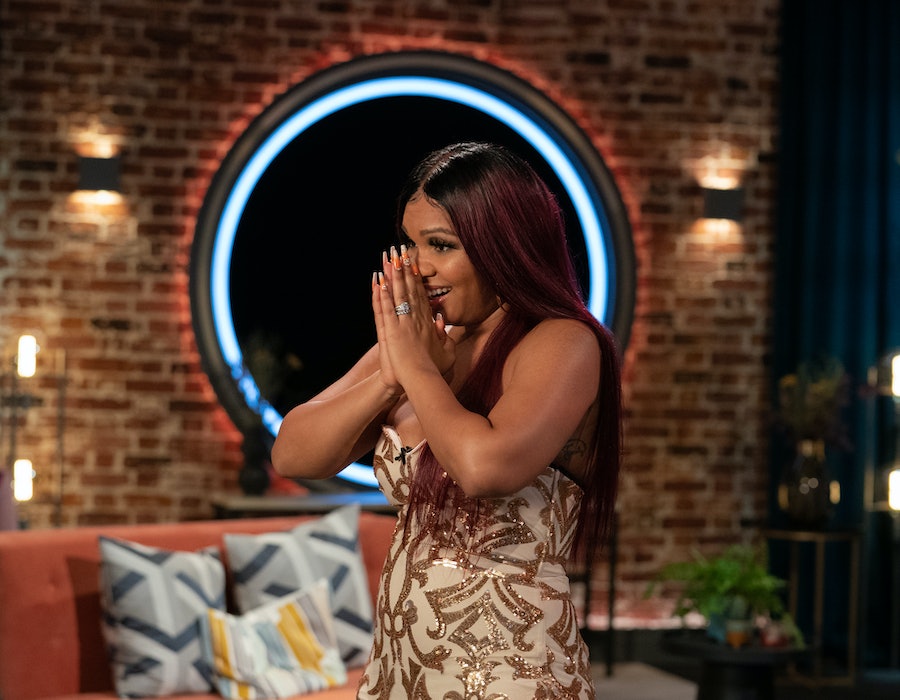 “I had my game plan set,” The Circle Season 2 winner tells Bustle. Though she hates to admit it, she knows how often women can get embroiled in drama, especially on a reality TV show structured around fake niceties and popularity contests. With that in mind, dominating the game meant posing as her husband Trevor, whom she reimagined in the Circle as a good-natured single father. She kept a detailed notebook of Trevor’s interests, which she studied for a week before filming. Her mantra going in was clear: “If I want to go far and I really want to win this money — and not just be on TV on a game show — I'm gonna do what I need to do.”

It helped, of course, that Deleesa knew exactly what she was fighting for: a new home for herself, Trevor, and her daughter, Toni Abella. And Deleesa got one extra push while filming: “I am pregnant and I am giving birth soon,” Deleesa happily reveals. “I actually found out when I was on The Circle.”

Deleesa’s drive to provide for her family made her the most strategic — and popular — player of Season 2. “I think people really resonated with my whole game plan: why I chose to come in as a catfish, and why I was in the game, period, for my family,” she explains. Since the show aired, she’s gotten a lot of supportive messages, especially from fellow parents. “Moms are like, ‘I respect you. I really love what you're doing. I cried with you,’” she says. “God, I can cry again reading these comments!”

While some players, like Chloe and Lee (aka “River”), had doubts about whether the emotionally mature “Trevor” was really a man, Deleesa ultimately maneuvered past the competition. In a season full of catfishes, Deleesa was crowned queen in the finale, bringing home the $100,000 prize.

Below, Deleesa chats about life after the show, the cast mates she keeps in touch with, and if she’d return to reality TV.

Congratulations on winning The Circle! How have you been since filming?

I have been so good. I've just been on cloud nine, and honestly it's like a dream come true.

I moved to Georgia, right outside of Atlanta. We did use [The Circle] the money for a down payment. We got a house, a five bedroom, two bathroom gorgeous house. It looks like a dream. And I am expecting — pretty soon, actually. Another little girl, can you believe that?!

You had to move out of the city, but I’m glad you were able to get a full home.

Yeah, it’s really hard living in the New York City area because the cost of living is so high. Trevor and I are both pretty similar in the sense that we still want to enjoy life. We could have put money away throughout the years [for a house], but then we would have sacrificed traveling and learning about new things, new people, new cultures, and new food. I feel like that really made us who we are. When the time came for us to start a family, we weren't able to buy a house, but The Circle provided the opportunity, and I can't be more blessed.

Did your family and friends learn you won after it happened, or did you have to keep that a secret?

I kept that a secret! I told my parents, of course, but Trevor's family has no idea. So when they watch the show they're gonna be super surprised! His family is extremely big on both sides, so I didn't want to risk telling them and then it just goes down the grapevine, and then next thing you know it's out.

Do you have any advice for future catfishers on the show?

Be prepared, that is number one. I see a lot of comments where people are like, "I don't want to root for catfish. I want a real person to win." We are real people. We're all playing a game. When you come in as a catfish, that's already a challenge. You're coming in with a huge target on your back automatically, and your first fight is to make sure you’re not found out.

You have to know your identity. Come in with a notebook, do your research, and study. And as much as you can, be yourself! You don't need to lie and pretend to be this whole entire persona. When people read your messages, they connect with you when you are being genuine.

Now that you've been on The Circle, has your opinion of social media and reality TV changed?

No, it never changed. I always kind of knew what it was. Being on reality TV... it's a show, and the show needs to give entertainment to its viewers. I think my cast mates understand that as well, for the most part. It’s like, “Okay, I know who I am in real life, and whatever you say online is not really going to hurt me.”

But for me, watching people attack my cast mates who are now my friends, aka my Circle family, it bothers me. I don't like bullies! I can't stand it, so I'm just like, “Leave them alone. You don't know them. I know them!” I always check in on them to make sure they're okay, and they're like, “Yeah girl I don't care. I just filter them out.” And I’m like, “Good, because I'm ready to curse them all out for you.”

Have you talked to Chloe since the finale? What have those conversations been like?

I have spoken to Chloe. We video chatted a couple of times, but Chloe is very busy. She has such a huge following, and I think she models and she's been on TV before. Also the time difference makes it hard. She's probably the one cast mate who’s very hard for all of us to get in touch with, which is completely understandable. But we definitely spoke. It's all good vibes there, no bad blood. We're friends!

You were suspicious of Courtney early on, especially because of his role as the Joker and his gameplay around Chloe. Did you get a chance to hash that out with him later?

Absolutely. When we got to the finale and saw everybody face to face, we all just laughed. It was bittersweet, like okay, this journey that we're on is ending. It was so much fun and it was cutthroat, but we all kind of knew we just did what we needed to do to get to the finale.

What were your conversations with Lee like? Hilariously, you were both throwing jabs at each other as fellow catfish.

You wore some shirts with statements like Black Lives Matter and The Future Is Female on them on the show. Given the regressive social politics that tend to swirl around reality TV franchises, it's awesome to see a mother from the Bronx wearing a Black Lives Matter t-shirt win the show. Did you intentionally wear those hoping they’d send a message on air?

I did. When I was told I was able to fly out to possibly be on the show, I wanted to make sure I packed those. I didn't know if I was going to be able to actually wear them, because I know there's strict rules on certain things that you can wear as far as branding. So I was very happy that Netflix let me wear it.

I'm a Black woman. I'm raising Black children. There’s a lot going on in the world, just for Black people in general. So I thought it was important to show that that's where I stand, and that's what I'm a part of.

On social media, I've seen more positive than negative, honestly. A lot of people were very receptive to that message. They really loved both of the shirts. They love the women empowerment message, and that's exactly what I'm all about. I consider myself an extremely strong woman, very independent, and I am going to raise my daughters to be exactly the same. So it was very important for me to get those messages out there.

Was there anything that surprised you watching the episodes back?

To bring it back to River/Lee, it really did surprise me that he was coming for me so hard. We had multiple chats about [having each other’s backs]. I don't know what made me feel like he was somewhat shady in the game, but it was very on and off, and sometimes I didn’t believe him. I didn’t know where his head was at, so watching it back it's like that’s where his head is at. I was like, I was right! I shouldn’t have second-guessed myself.

I was also surprised that in the Glammequin Challenge people really thought I did such an amazing job. I thought I just did arts and crafts.

What’s next for you? Would you go on to another reality show?

I would totally go on another reality show. It's fun for me and I feel like, in the long run, it helps give me the exposure that I need to provide for my family.

As you know, I'm a mompreneur. I have a couple of businesses, and my creative mind is always working. I plan on making children's books, specifically for little Black girls. Starting from the time they’re toddlers, I want to teach them confidence and let them love themselves. Because it's very hard for us, as women in general, but especially for Black women.

I also have my clothing line. If people want to wear the messages I had on the show, they're going to be able to find it there.

We also have a family YouTube channel, as it seems that people are actually extremely invested in my family. So I'm going to continue pushing those videos out there, and just see where that takes us. You never know, we might be on your screen again, as a family this time!